But the parade goes on − with lower fences this year 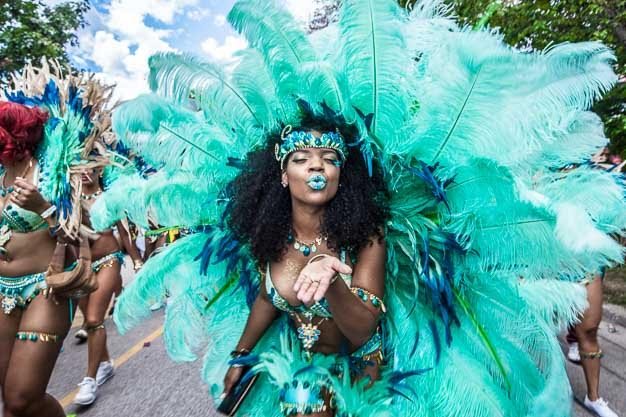 More than one million people are expected to descend onto Lakeshore and the nearby exhibition grounds for Toronto Caribbean Carnival’s grand parade on July 30. Now in its 49th year, the high-energy showcase of musicians and dancers in colourful costumes is the marquee event for the three-week long cultural festival. The event brings in millions of dollars for the city’s hotels and restaurants, and attracts thousands of Americans looking to take advantage of the low loonie. But for some reason, the festival itself remains in the red.

Caribbean Carnival was one of several arts and culture organizations dropped from Scotiabank’s sponsorship roster in 2015. In a January interview with NOW, Denise Herrara Jackson, the festival’s chief executive officer, said that loss equated to a $2 million shortfall. At the time, Caribbean Carnival was determined to secure another sponsor while considering other options, such as hiking admission fees for the grand parade and other ticketed events. But according to Weir, those fees have stayed the same.

Instead, the festival has tacked on an extra five-day event held at Regent Park for free, sponsored by Toronto non-profit Artscape. Carnival Village, which is part of the Daniels Spectrum Summer Series, is a community celebration of masquerade, music, dance and storytelling specifically directed at youth.

Support from corporate Canada, however, hasn’t arrived. Caribbean Carnival’s website lists around a dozen sponsors, but Weir says most of that support is directed at individual events and activities. In order words, every contribution helps, but the festival still requires a major sponsor similar to what Scotiabank provided for eight years.

“For whatever reason, we have not been able to get corporate Canada interested – not even a nibble. It’s really unfortunate,” he says. “We really have to address our fundraising because somebody out there must want to meet our audience.”

While Weir is hesitant to attribute the lack of corporate interest to racism, he suspects the festival would have more success if there were more Caribbean-Canadian executives at companies making decisions on where they spend the money. For instance, for a short time, General Motors stepped in to sponsor the Junior Carnival Parade and King and Queen competition.

“The president at GM was Jamaican-Canadian and they were strong supporters, but then he retired and so did they,” Weir says. “Having a Caribbean person on a company’s team really helps. If there’s someone who actually understands what Carnival is, it’s a big door opener.”

While they continue to accept donations and small sponsorships up until parade day, Weir isn’t expecting what he calls “savior dollars.” He’s got other business on mind, such as how this year’s decision to lower the barricade between the audience and performers will affect the parade.

Since 2009, the grand parade has separated viewers and performers using 10-foot fences in an attempt to deter members of the public from rushing the parade route. However, Weir says that in the past, “stormers” intent on being part of the parade have brought bolt cutters to the event and found their way onto the parade route, effectively disrupting performances. So this year, those fences are being lowered to 4-foot barriers.

“We thought this year, why don’t we put small fences and ask everybody to behave. If you’re at the small fence area, you can get pictures, you can interact with the parade and provided you stay on the other side of the fence, the parade will go on without any problems,” Weir says.

On the parade route in the exhibition area, fences will still be 10 feet so that the bands and dancers can perform in front of the judges. Parade attendees can buy tickets for seats on bleachers in that area, so they’ll also have an unobstructed view. The majority of the 3.5-kilometre parade route, however, will have lowered fences.

The festival has hired about 600 private security guards to watch the parade along Lakeshore. Toronto police will also be present.

“Basically, anything we do is greeted with either horror or support,” Weir says. “There are some people who are worried that stormers are stormers and this will be awful. But then we have just as many people telling us, ‘This is great, finally.’”

Want more about this week’s Caribbean Carnival events? Check out our event listings.