WMDs in the west end of Toronto?

After failed community attempts to shut it down, GE's uranium pellet plant on Lansdowne has just been bought by U.S.-based nuclear weapons manufacturer BWX Technologies 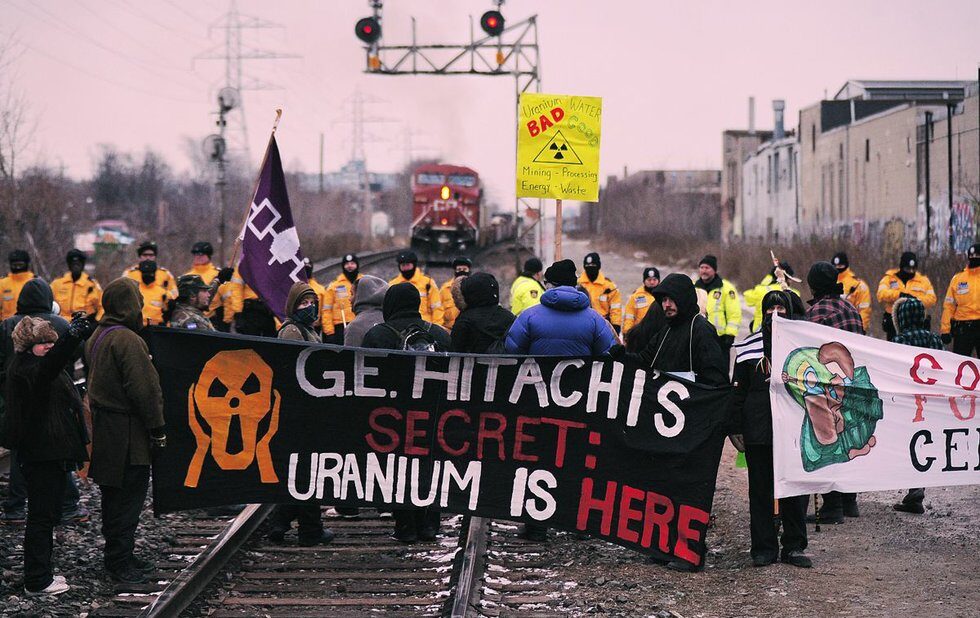 Activists have warned about safety issues posed by derailments on the CP rail line near GE Hitachi's uranium-processing plant.

Activists have warned about safety issues posed by derailments on the CP rail line near GE Hitachi's uranium-processing plant.

Toronto’s west end has a new nuclear neighbour. General Electric Hitachi announced August 19 that it plans to sell its Canadian nuclear operations, including its uranium pellet plant on Lansdowne, to BWXT Canada Ltd., a subsidiary of Lynchburg, Virginia’s BWX Technologies, which operates one of only two facilities in the U.S. licensed to process highly enriched uranium.

Among the “recent accomplishments” listed on the company’s website: the manufacturing of the grapefruit-size plutonium cores used in the W88 thermonuclear warhead designed for the Trident II submarine-launched ballistic missiles.

If BWXT acquires the necessary licence and regulatory approval from the federal government, it will take over GE Hitachi’s operations and 350 employees at three plants in Toronto, Peterborough and Arnprior. BWXT’s Cambridge plant was recently awarded a $103 million contract to supply the first eight of 32 steam generators for the refurbishment of the Bruce Nuclear Generating Station in Tiverton.

The GE Hitachi plant at 1025 Lansdowne, north of Dupont, processes 53 per cent of all the nuclear fuel used in Canada’s nuclear reactors. Drums of yellowcake uranium dioxide powder are trucked into Toronto and transformed into ceramic pellets for use in fuel rods at the Pickering and Darlington reactors.

The Canadian Nuclear Safety Commission (CNSC), the nuclear industry’s regulatory agency, permits the plant to release up to 9,000 kilograms of uranium waste into the sewer system and 760 grams into the air annually.

Community concern about whether pollution from the plant poses a health threat led to a series of public meetings in 2012. A campaign to shut down the plant, including a blockade of the CP rail line running a couple of metres south of it, led to a community consultation at the Holiday Inn Yorkdale in 2013 that was attended by representatives from the CNSC, the Ontario Ministry of the Environment and Toronto Public Health. Reassurances were made that the plant posed no significant health risk.

Mohawk Six Nations activist Sigrid Kneve, who worked on the campaign to shutter the plant, says the August 21 derailment in the Annex, on the same CP line, will only renew safety concerns. “We have been warning for years that an accident could happen,” Kneve says.

General Electric, which manufactures drones for the U.S. military efforts in Pakistan and the Middle East, has its own history with nuclear weapons it manufactured them in the U.S. until 1993 but got out of the business after a consumer boycott launched in 1986 successfully pressured major retail stores, including Safeway and Target, to stop stocking their light bulbs.

Candyce Paul of the Committee for Future Generations, a group of Dene, Cree, Metis and settlers who oppose the effects of uranium mining and the proposed burial of high-level nuclear waste on Indigenous land, says there are many overlaps between the commercial and military uses of nuclear power.

“They always say the uranium is used for peaceful [commercial] purposes,” Paul says. “So if some part of it has become radioactive waste and it is reprocessed to make plutonium, it is not their problem.”

The CNSC has approved shipments in the past of tritium – a nuclear-power byproduct that’s also used as a detonating component in nuclear bombs – to Iran from SRB Technologies in Pembroke, Ontario.

In fact, the CANDU reactor, Canada’s first nuclear reactor, was built to produce plutonium for bombs. The design was later retooled to allow for the production of electricity.

In his book Atomic Accomplice, Paul McKay writes that the military origin of the reactor design “explains why the CANDU reactor typically produces 2.6 grams of plutonium per kilogram of used uranium fuel – the highest ratio among all commercial reactor designs.”

From uranium mining on Indigenous land to highly radioactive nuclear waste, Canada’s nuclear power chain has global links. For Torontonians, and west-end residents in particular, GE’s sale of its plants to BWXT means having to reconsider whether it’s safe, or appropriate, to have a uranium processing plant in a residential neighbourhood, says Angela Bischoff of the Ontario Clean Air Alliance.

“Toronto is a nuclear-weapons-free zone,” Bischoff says. “We created a Peace Garden at Nathan Phillips Square, and we signed the Mayors For Peace declaration. By welcoming this company into the middle of our city we are actually contravening the declaration.”

Zach Ruiter was an organizer of the campaign to shut down GE Hitachi’s Lansdowne plant.