NowMagazineNewsWoodGreen workers walk off the job

WoodGreen workers walk off the job 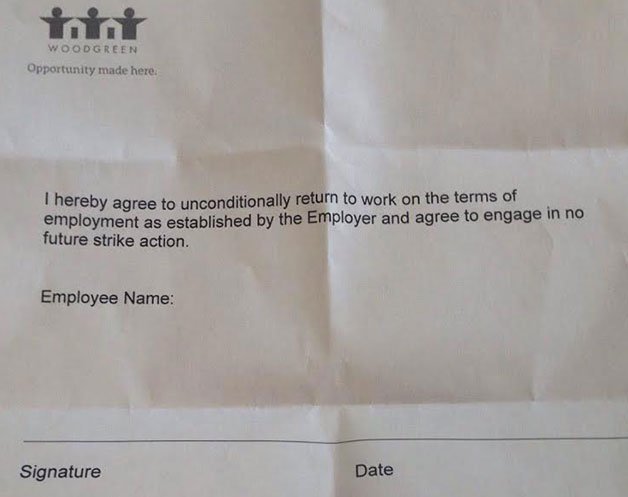 Photos and video by Zach Ruiter

Workers have been offered a 1.25 per cent wage increase that barely offsets the cost of living. And $15 extra vision care for employees with benefits. WoodGreen PSWs earn $16.38 an hour. Pay for other jobs at WoodGreen vary from $12 to $39 an hour.

In 2013, meanwhile, eight of WoodGreen’s management staff earned more than $1 million in salaries and taxable benefits. WoodGreen’s CEO, Brian Smith, made more than $204,000, according to Worker’s United representative Adrie Naylor.

A common theme of their grievances is the need for dignity and respect, and for the work that they do to be valued.

Lee Huang, a PSW walking the picket line outside, is upset to learn that PSWs from a different unionized agency have crossed the line and are caring for her clients.

“I talked to my union to see if they can talk to their union,” says Huang “We are all workers we should be united, even in different agencies.”

Workers United local 154 is an affiliate of the Service Employees International Union (SEIU), the PSW’s crossing the picket lines from VHA, a competing agency, are also part of SEIU.

Bill Hulme of SEIU Healthcare confirms VHA workers crossed the picket line but says they were shocked find out that there would be a strike on Tuesday morning (October 14).

Says Felicia Talbot, another worker on the picket line: “I am what they call a casual worker. I don’t have any benefits. I do have another part time job. I’m a single parent like many others here I need the two incomes and the two together don’t make one. I use foodbanks once in a while. I have to stand up for what’s right. A 1.25 per cent [pay increase] doesn’t cut it.”

Brian Smith is the WoodGreen CEO, but on Tuesday morning, October 14, he was filling in for early childhood educators at the Duke of Connaught public school. He is set to retire in the near future after 36 years in the position.

“I think we’ve made an offer that is reasonable,” he says. “I know of other organizations, at least five others, all of which had offers much less than what we’ve made to the union. All I am saying is we all have very limited resources and we get our funds from various government contracts and we have been flat-lined in those so you can’t give what you don’t have. We either lay people off or reduce services.”

On the sidewalk outside the school, Smith meets with picketing workers who persuaded him to come back to the table and negotiate.

Barry Fowlie, the director of the Workers United Canada Council, invites Smith to meet with him at the union’s 317 Adelaide Street head-office at 2 pm, at the same time as the workers would be picketing en masse at the WoodGreen head-offices at 815 Danforth Avenue.

“Things really have gone off the rails when you’ve got a strike at WoodGreen,” offers Ward 30 Councillor Paula Fletcher from her campaign office. “This is a unionized environment, I guess that hasn’t been meeting the needs of the employees, or there has been some issues regarding how those negotiations have taken place.”

Workers United Local 154 is asking for a two-year contract and a two per cent cost-of-living wage increase, as well as extending benefits to all employees, including part-time and relief workers.

Even at two per cent, they are fighting for what is in effect a wage decrease because the consumer price index based cost of living hovers around 2.5 per cent. And the real cost of living in Toronto? That’s another story.

A WoodGreen advertising campaign for its Homeward Bound program “to help single mothers and their children move from homelessness and poverty to successful careers and self-sufficiency,” is still up in the TTC.

The advertisement reads, “What if we cared about those living in poverty as much as we care about celebrities? Help struggling single mothers move out of poverty.”

Nothing is accomplished at the meeting between Workers United and WoodGreen CEO Brian Smith at the union’s downtown offices. Members of the bargaining team are upset that they were not included.

Workers United’s Barry Fowlie described the meeting: “Nothing concrete was put on the table here, so its all in the netherworld. We’ve cut and cut, we’ve been the one’s cutting all along the line.”

Bargaining team member Tammy Harnett speaks on what she describes as the disrespectful tone of contract talks with Robert Wesley, WoodGreen’s new vice-president of human resources.

“He is from the corporate world,” she says.

Workers were called individually to meet with supervisors before last week’s walkout and asked to sign a letter stating they would agree to not strike. The union has filed an unfair labour practices complaint with the Ministry of Labour.

WoodGreen Community Services is one of the largest social service agencies in Toronto, helping some 37,000 people each year in the areas of children and youth, health and wellness, employment, housing, immigrant settlement and seniors.

WoodGreen is financed through three levels of government and private donations. Year-to-year funding provided by government departments cannot be transferred between WoodGreen programs.