Would you follow Rob Ford against the zombie apocalypse horde? 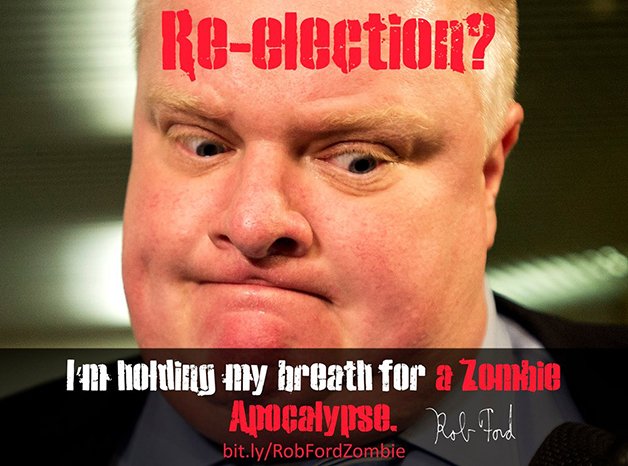 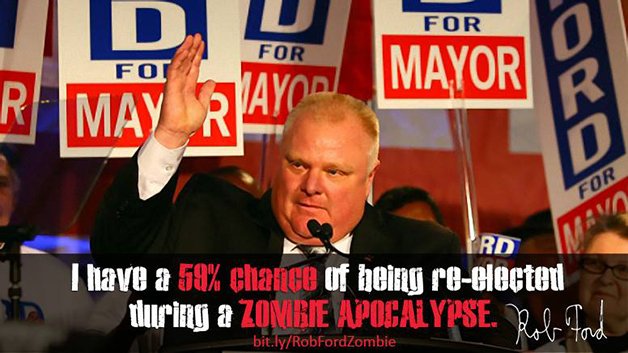 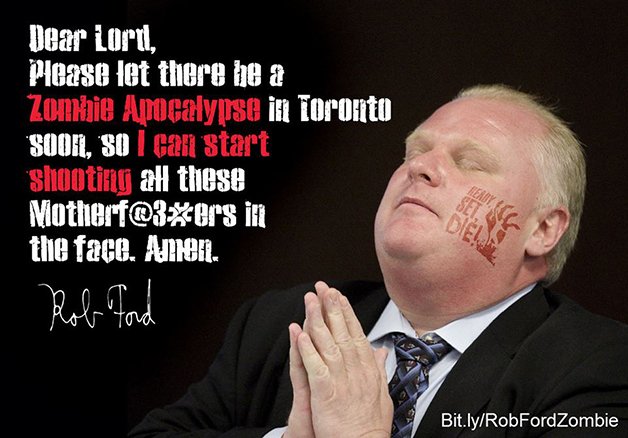 In a poll that truly proves polls are ultimately flawed, it turns out 63 per cent of respondents (1,600 so far) would follow Mayor Rob Ford if a zombie apocalypse hit Toronto.

Upon closer inspection of the comments, it turns out, many of those who voted for him say they would use him as a human shield or as fodder for the zombies.

And, to be fair, your only other option is to be eaten by a zombie. So it’s a bit of a false dichotomy, but really, we are talking about a fictional situation after all.

The question is predicated on the idea that during wartime citizens re-elect their current leaders despite their failures.

When a local fitness guru JP Richards read a report that placed Toronto second last in terms of apocalypse preparedness he decided the question needed answering.

A report by Edmonton based engineer Michael Ross looked at six factors to determine preparedness: proximity to a military base, average temperature, population, obesity, physical activity and gun ownership.

Oddly, at least based on the last factor, Windsor is less prepared than Toronto. The most zombie-ready town in the north goes to St. John’s, Newfoundland with a whopping 142,950,000 gun licences.

Based on those factors, Richards says, “Our population is the most dense in Canada we’re inactive and we’re obese and we don’t have any guns.”

“Ford’s all about tightening his belt – he’s been trying to lose weight in the last year,” Richard says. “And, he’s really behind fitness.”

Richards was hoping to get the mayor out to the 5-kilometre zombie obstacle course – READY SET DIE – run this May 31st at Polson Pier, but when his poll and the second crack video dropped on the same day he thought they may want to hold off.

Regardless, it seems the zombie fans are split. “You either love or hate him,” says Richards.

“When the shit comes down they want someone that’s going to get it done.”

“Based on 63 per cent we will approach him and see if he will come out” to the event.