For occasions large and small, Torontonians reserve the right not to give a shit – and to be offended by the suggestion that this is a character flaw 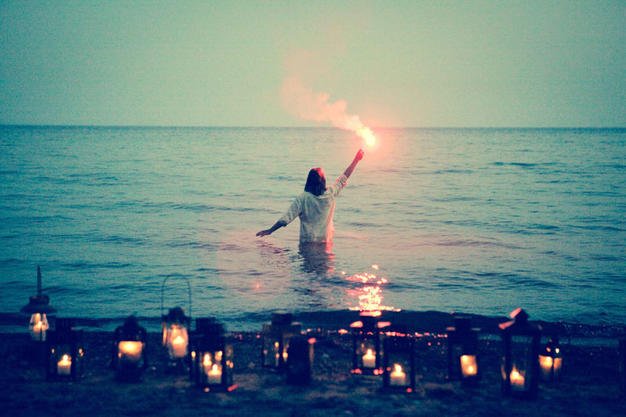 It shouldn’t take an international sporting event to justify commissions of large-scale works from Toronto’s best theatre companies, but apparently it does. (Photo from It Comes In Waves, mounted by bluemouth inc. and Necessary Angel as part of Panamania.)

It takes a particular arrogance to believe that any one thing might capture the imagination of a place as complicated and diverse as Toronto.

Which is why it was perplexing that denizens of the city were admonished for our initial indifference to the Pan Am Games and repeatedly told we should be grateful to be hosting the latest edition of a large sporting event to which few of us had ever given serious thought.

Toronto is a sufficiently large and multifaceted city that even the orbits of its biggest events can be escaped by walking a few blocks away. For those who choose to plunge into TIFF, Pride or Caribana, the bubble becomes an all-consuming parallel universe. But for everyone else, it’s just another thing, and the same was mostly true with Pan Am. (The Boston Globe’s Wesley Morris once observed that one of his favourite things about TIFF was “the way it is so thoroughly integrated with the city. Unlike Sundance or Cannes or Rotterdam, the Toronto International Film Festival doesn’t take over Toronto.”)

For occasions large and small, we reserve the right not to give a shit, and to be offended by the suggestion that this is somehow a character flaw.

Just prior to the Games, the New York Times accurately characterized Toronto’s reaction as akin “to a new tattoo discovered the morning after a wild night.”

It’s as though, leering at colourful, misshapen designs plastered in unexpected places, we collectively thought, “Huh. I guess this is something we have now.”

It was a thoroughly reasonable response to the arrival of a quadrennial competition that wasn’t previously on our radar (nor would likely be so again), whose previous host was Guadalajara and that’d been held in Winnipeg twice.

As an ambition conjured out of thin air that we were expected to then buy into, the Pan Am Games most resembled the top-down cultural carnival that is Luminato.

But whereas the organizers of that festival are content to pretend it has popular support, the people behind Pan Am were like perky frosh leaders expressing their disappointment at our lack of enthusiasm for the cheer they were trying to teach. They presumed a level of goodwill and benefit of the doubt that they hadn’t quite earned.

The presumptuousness was inadvertently put into context by a late-June Star article profiling “pitch master” Bob Richardson, whose idea it was for Toronto to host the Games.

“Coming off a failed Olympic bid for the 2008 Games as the chief operating officer,” the paper wrote, the public affairs executive and prominent Liberal backroomer “grappled with other ways to bring that investment to Toronto. The politically minded Richardson, who admits he’s not much of a sports guy, is used to getting his way – see John Tory’s successful 2014 mayoralty campaign” (of which he was co-chair).

My own interaction with Richardson has been limited to Twitter.

When Star columnist Corey Mintz, who in his long-running Fed series interviewed subjects over dinner parties he prepared, arranged to host then-candidate Tory last September, he was told by the campaign that they’d cancel the engagement unless my name were scrubbed from the guest list. When I tweeted about what happened and included an excerpt from Tory’s platform that emphasized the importance of a mayor taking questions, Richardson responded, “25 debates. Thousands of questions, hundreds of public meetings. Sorry. Get a life.”

He apologized for the tweet the next day (and my relations with Tory’s team normalized once he became mayor), but I’ve thought about it again in the wake of Pan Am and with the news that yet another effort to woo the International Olympic Committee may seriously be on the table. The remark seems to embody a larger attitude toward politics and society. What is a modern Olympic bid if not an elite class’s impatient condescension writ large?

On top of specific, substantial issues associated with hosting the Olympics is the bigger, obvious question of why governments often seem ready to unload massive amounts of money – funds they regularly claim not to have when activists demand a sliver of it for, say, housing or transit – at the sudden behest of a small group of influential people.

To the extent that the public comes on board, it’s because we’re promised things that we deserve but might not otherwise be granted: partly infrastructure, partly dignity.

And if Torontonians warmed to the Pan Am Games, it was because we found out what we were missing. A nightly fireworks show at City Hall is awesome. So is a colour-changing sign that spells out the city’s name.

But these things are only special because we seldom celebrate Toronto for its own sake and evidently require an excuse, however flimsy. It shouldn’t take an international sporting event to justify commissions of large-scale works from the city’s best theatre companies, but apparently it does.

At the conclusion of It Comes In Waves, the Panamania show from bluemouth inc. and Necessary Angel, audience members return from the Toronto Islands in a water taxi.

The show is magical, special, transformative – a blend of performance and landscape, light and sound, entertainment and mourning. But nothing assembled by the group of artists approaches the majesty of the city when it comes into view as the boat reaches the inner harbour at 11:30 pm. More colourful than you remember it, taller, wider, the skyline is a gut-punch to civic cynicism, the ultimate theatrical climax.

Too big to be packaged and resold for a one-time event by a small group of people, Toronto needs long-term funds to be the best version of itself.

If Richardson and his colleagues love this city, and I’m sure they do, they will acknowledge that it exceeds their grasp.