This week offers a look at the original RoboCop, a film program for Black History Month, and a little psychic action 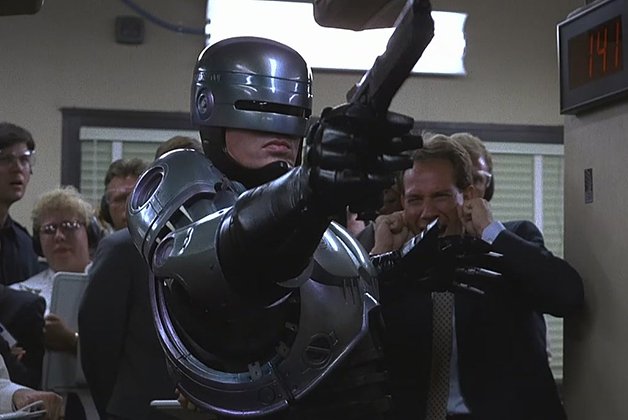 You may have heard: there’s a new RoboCop in town. (Well, technically there already has been Jose Padilha’s remake, opening Wednesday, was shot right here in Toronto.) And before the slicker, CG-enhanced version stomps into theatres bent on overwriting our memories of the original, the Rainbow Cinema Market Square is celebrating Paul Verhoeven’s 1987 masterwork with a late-night screening this Saturday (February 8).

A $10 ticket gets you admission to the 11 pm screening – and a beer, since the event is licensed and brought to you by the fine folks at the Toronto Film Scene. No one under 18 will be admitted, but that’s probably just as well my introduction might get a little blue.

(Wait, did I forget to mention that I’m introducing this particular screening of RoboCop? Because I totally am. And you don’t even have to pay extra!)

But maybe you’re not in the mood for dead-on Hollywood satire that now plays as a warning shot across the bow of Reagan-era conservatism. Maybe you’re looking for something a little more substantial, tied to Black History Month.

If you can brave the walk to the waterfront, this weekend’s Kuumba festival at Harbourfront Centre offers a substantial film component built around the theme of black identity. Tonight, it’s Sudz Sutherland’s drama Home Again at 8 pm – with Sutherland present for a post-screening Q&A – and Hubert Davis’s documentary Invisible City at 10:30 pm.

Tomorrow (February 8), Bill Guttentag and Dan Sturman’s raucous civil-rights rockumentary Soundtrack For A Revolution screens at 2 pm. And on Sunday (February 9), two programs of shorts screen at 1 pm and 2:30 pm.

Too heavy? Looking for more of an escape this week? Raven Banner and Cineplex are just about to launch the new season of Sinister Cinema, which splashes a new horror movie onto screens across Canada for a one-night engagement every few weeks.

It all kicks off at 7:30 pm Thursday (February 13) with Stephen Sommers’s Odd Thomas, starring Anton Yelchin as a psychically gifted short-order cook who becomes convinced something terrible is about to happen in his small town.

Based on the novel by Dean Koontz, it’s considerably less horrific than Raven Banner’s previous selections – Sommers is the guy who made The Mummy and G.I. Joe: The Rise Of Cobra, and his PG-13 thrill-ride instincts don’t always line up with the darker turns this material ultimately takes – but Yelchin is charming, the plot is appropriately twisty and Willem Dafoe gets to enjoy himself as a supportive lawman.

Things will get darker in the weeks to come with Jeremy Lovering’s In Fear (a home-invasion movie that takes place in the confines of a car) March 13, E.L. Katz’s SXSW hit Cheap Thrills March 27, Jeremy Gardner’s post-apocalyptic drama The Battery April 17 and the sure to be splatteriffic Cabin Fever: Patient Zero May 29. I’ll keep you posted.