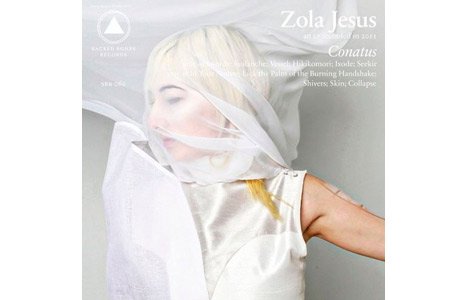 On Conatus, Zola Jesus (Nika Danilova) reveals herself as an avant-gardist with pop ambition. The Wisconsin-reared musician’s third album is not as bleak – but no less cinematic – than her previous work. This could be the result of her recent move to L.A., but more likely indicates an artist hitting her stride.

A classically trained opera singer, Zola Jesus wields her voice strategically. She fills yawning spaces with delicately layered swatches of siren calls, and burrows into all that sound with her plaintive timbre. Propulsive, stabbing drums build a tension that’s diffused by luminous vocals and fleeting seconds of fluttery bass.

Organic instrumentation cuts through the synth-manufactured haze, a visceral effect mirrored in song titles like Avalanche and Skin. Like her prior work, the songs are thematically dark and diffuse, but the dancey impulses on Vessel and Seekir signal headier paths ahead. Could Zola Jesus be the inverse Lady Gaga?