On the edge! Stand-up and MTV maverick sounds off on Chappelle, the n-word and hitting rock bottom 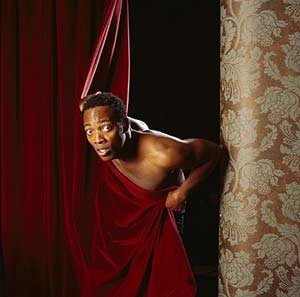 Gilson Lubin is calling some guy a cracker.

“Yo! Cracker!” he shouts, outside the MTV studios at the Masonic Temple.

He grins. “Is ‘cracker’ harsher than ‘redneck?'” he quizzes his two-man camera crew, clearing the way for a little old lady to get by.

It’s all part of Word From The Street, his weekly rant for MTV Canada. Today, he’s mouthing off about Michael Richards’s use of the N-word and trying to illustrate the fact that there’s no comparable white putdown.

Between takes, he giggles at the sheer audacity of his own ramblings.

The sight of two television cameras trained on a young, casually dressed black man isn’t exactly common in Toronto especially on the outskirts of one of the whitest neighbourhoods in the city.

But Lubin is changing the face of TV, just as he’s shaken up the world of stand-up since he burst onto the scene a few years ago.

“I love the fact that I have this platform to say whatever I want,” he says about this weekly part of his MTV gig. “I’m not even that angry. After every take I usually laugh. I have no reason to be angry.”

Call it the Gilson Lubin paradox. Watching his easy-going stand-up act on the Yuk Yuk’s circuit or at one-offs like the CD taping night he’s headlining Wednesday at the Rivoli you know he’s dealt with some serious shit. But his fresh delivery turns the pain into laughter.

It’s no surprise that his comic idols include accessible acts like Dick Gregory and Dave Chappelle.

A few months ago, his recognition factor skyrocketed when he opened two sold-out Massey Hall shows for Chappelle.

“Oh my god, man,” he says, about getting the Chappelle gig. “I’m sure every comic in town was like, “Dang! I hate Gilson Lubin!’ Chappelle’s like a modern-day Richard Pryor.”

A few weeks after the gig, a cop looked at him and smiled.

“My first reaction was like, “Whatever!’ And two seconds later, I looked back at him. I mean, what kind of world is this when you get pissed off at someone smiling at you? It turns out he saw the Chappelle show and wanted to know when he could see my act.”

To understand Lubin’s humour, you’ve got to consider his island background. He grew up with his grandmother on the don’t-worry, be-happy island of St. Lucia, and moved to Toronto at 11 to live with his father. Once here, he was genuinely shocked to be judged by the colour of his skin.

“It didn’t hit me right away. It was bit by bit,” he says. “A bunch of things happened.”

“Okay, this is for the A&E Biography, in case I never get the biography,” he laughs. “I was on the subway once going to school and got kicked around by these strangers in front of a subway car full of people. No one said a word. I was 13. That confused me for the longest while.”

He still hasn’t used that in his act. But his rage and sense of injustice bubble beneath the surface of some of his classic bits, particularly the ones about why black licorice is the worst-tasting licorice around and why people use the phrase “dark night.” (“Aren’t all nights dark?”)

His father and stepmother are both former cops, and warned him what to say if he was ever pulled over for DWB (driving while black).

“Okay, if black people are reading this, remember that you’re entitled to have a conversation with a cop,” he says. “My parents told me that if I’m pulled over I should tell the cop, ‘I don’t mind talking with you, as long as you give me your badge number.’ If he’s up to no good he’ll let you know right away. Yeah, there are cops out there who are up to no good. I’ve had a million and 10 experiences. Well, not a million, but I could easily count them on more than both hands.”

During the taping of his MTV segment, his producer, Pam, stands next to me and says, “Brilliant, huh? I’m petrified of the day we lose him to some American sitcom.”

When I relate this to Lubin a half-hour later, in a quiet nook at the Yorkville cigar boutique Thomas Hinds (he’s buddies with the owners, who called him up when Bill Cosby was in town), he almost tears up.

“I’m not naturally funny,” he says. “I know how to craft a few jokes. But I just love working. I don’t ever want to leave Canada. I don’t think anyone does. America is the number-one hated place on the planet now. No one’s going to bomb the CNE.”

He’s got a U.S. visa, so chances are he’ll eventually make the move to L.A., following in the footsteps of his former Yuk Yuk’s tour buddies Russell Peters and Shaun Majumder.

He tells me that if he does move, he’ll want to spend at least half the year in Canada. He’d like to write and perform a John Leguizamo-type solo show one of these days.

In the few years that I’ve followed his act, Lubin’s matured, both onstage and off. The MTV gig and his sketch work with the troupe the Sketchersons have helped sharpen his edge. But he’s still got a vulnerability that comes through. He hasn’t forgotten what it was like to hit rock bottom. A few years ago, he got evicted from his apartment and had to crash on couches at his stand-up friends’.

“I’m more comfortable with myself these days,” he tells me. “The first time on tour, when I was walking in small towns I’d keep my head down, and if someone looked at me I’d look away. Now, I kind of don’t care what people think about me.

“My mom always told me to approach something as if I’d done it a million times before. So nothing really scares me. What’s going to happen? Am I going to get evicted? It’s happened. I know how to handle that. You going to shoot me? Then it’s over. I don’t have to worry about this shit any more.”

Then he mouths what could be the Gilson Lubin philosophy.

Oh, yeah. And don’t forget to leave them laughing.

Video Clip : Gilson’s Word From the Street on MTV Canada