The Steps Across The Water 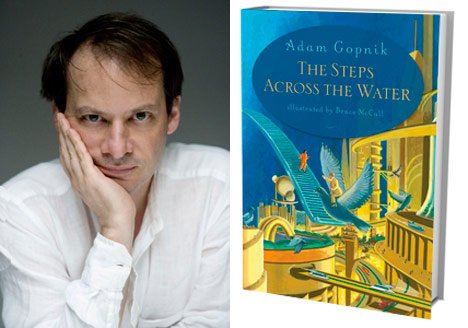 Note to doubleday: when you send out review copies of a book billed as “a magical new illustrated novel,” be sure to include the illustrations. Pictures are crucial for defining the tone of a children’s book (sorry, juvenile fiction), and the limp Le Corbusier-inspired cover art does not inspire confidence in the author’s vision for an alternate universe.

The tale starts from a basic Central-Park-as-Narnia premise. Young Rose discovers a secret staircase rising from the park’s lake that leads to an alternate version of the Big Apple called U Nork. Her older brother, Oliver, went through a similar adventure in 2005 in Gopnik’s first kids’ book, The King In The Window, a departure from his usually heady prose for the New Yorker.

The U Nork sequences have some fine moments that satirize city living. Characters dine at a café that literally catapults food into your mouth, and people scramble along the sidewalk over top of each other three deep. Gopnik skewers the lapdog trend by introducing a dog no bigger than a thumbnail that Rose keeps in her pocket. It survives by eating diamond dust.

But it doesn’t hold together as a cohesive alternate universe like those of C.S. Lewis’s Narnia series or even Neil Gaiman’s Coraline. Gopnik’s U Nork lacks fully fleshed-out characters and depth. Successful children’s books need to feel universal. The Steps Across The Water feels like a hastily written love-letter to New York.

Gopnik reads with Eleanor Cattan, M.T. Kelly and Adam Lewis Schroeder, Wednesday (October 27), and appears at a round table with Patricia Engel and Andrea Levy, October 28.