Sharmini Anandavel’s grisly murder was a new kind of horror for the Tamil Community. And CBC’s true crime podcast, Uncover, gets why.

In its fifth season, author and host Michelle Shephard revisits the 20-year-old investigation she first encountered as a Toronto Star reporter, with fresh insight, disturbing new details and intimate interviews that are alternately heartbreaking and infuriating.

Anandavel went missing on June 12, 1999. She was on her way to a new job that we now know never existed. Four months later, her remains, reduced to a skull and mandible, were discovered by hikers near a ravine.

In the first episode’s prologue, Shephard accompanies Toronto police detective Matt Crone to the shallow grave where the remains were found. They describe the area as a “beautiful” and “serene” resting place, trying to find some comfort in a cold case that provides very little.

The first two half-hour episodes, which launch September 10, bring us up to speed on the known facts before diving into who 15-year-old Sharmini Anandavel was, through interviews with friends and a teacher, and the unique social and cultural fabric that this case tore through.

Anandavel’s family arrived in Canada in 1993, escaping the civil war in Sri Lanka. When she disappeared, the Tamil community in Toronto was experiencing growing pains. The word Tamil in the media was often associated with violence, and not simply because of what was going on back home. This was the era of the Tamil Task Force, a special unit mounted by Toronto police to deal with a very bloody and public war raging between the VVT and AK Kannan, as well as younger affiliate gangs. Domestic violence was also prominent, with stories about strict families reacting badly to their daughter’s socializing and finding boyfriends outside of an arranged marriage. 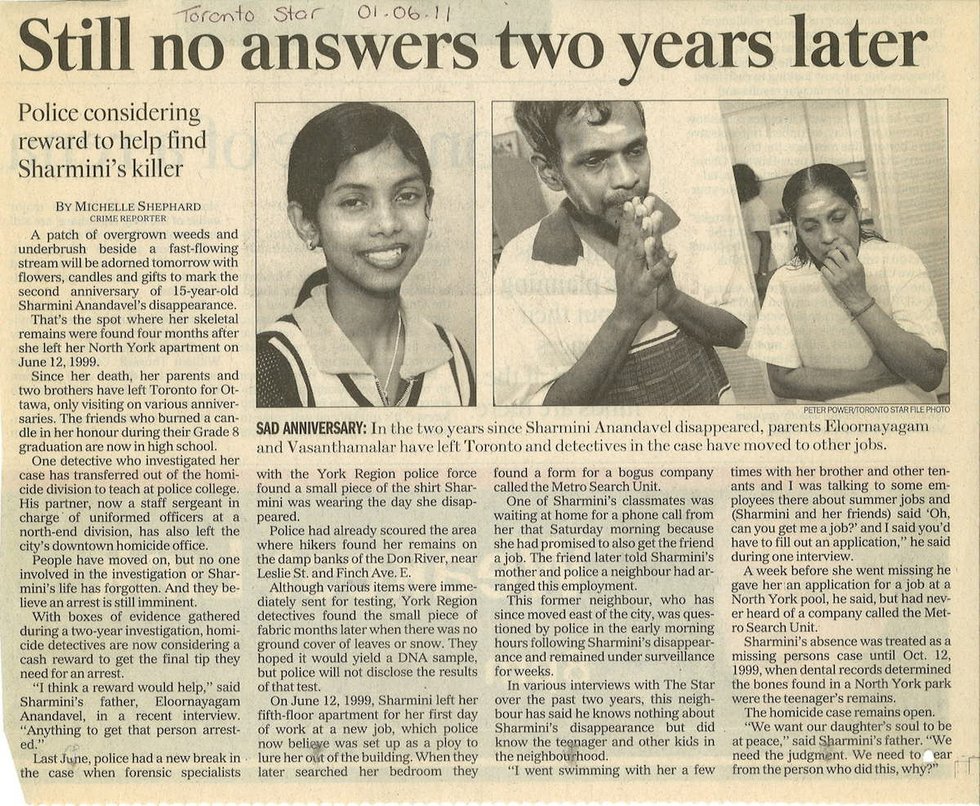 These stories clouded the investigation into Anandavel’s disappearence, a detective tells Shephard, as police were following rumours saying that Anandavel had a gang-member boyfriend responsible for her disappearance, or others claiming her parents shipped the child off into a forced marriage.

Meanwhile, the prime suspect has always been right there. Stanley Tippett, a neighbour who has since been serving time for other crimes, is known to have given Anandavel a fake job application. Tippett has never been charged because there wasn’t enough evidence to satisfy a case.

But Uncover proceeds as though Tippett’s involvement is a foregone conclusion. The podcast doesn’t really need to dangle a mystery to be gripping and revelatory. Instead Shephard and co-producer Kathleen Goldhar take the time to paint a vivid picture, one that we never get from the reports.

We get hear the voice of a detective whose hands are tied and listen to how a community copes when they can’t act on a suspected sexual predator in their midst. And we learn about Anandavel’s community near Peanut Plaza, a home to the working class and new immigrants.

Absorbing all the factors that led to Anandavel’s death rips your heart out. She was desperate for a job so that she could buy herself a grad outfit that her parents couldn’t afford. She was lured to her death with the promise of employment. Her parents, who barely spoke English, didn’t understand how things worked enough to be suspicious about their daughter’s questionable new job.

The family was marginalized. That’s what made their daughter prey.