The popular comedy club expands into the east end, where it will temporarily house the new Second City show and training centre 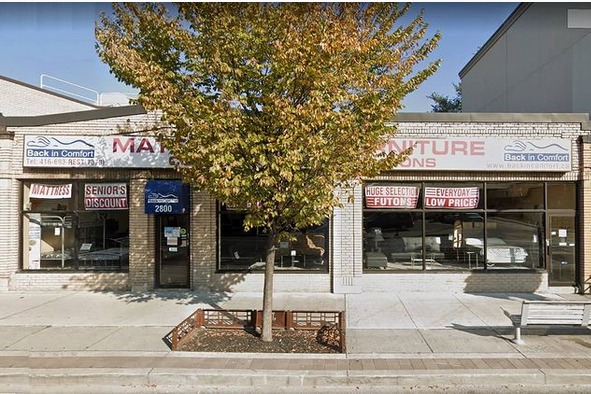 In a month or so, this old mattress store on the Danforth will be making you laugh.

The Toronto comedy scene is shifting a little bit east.

This fall, Comedy Bar Danforth will open at 2800 Danforth, between Main and Victoria Park at Dawes. Its first big show will be the as-yet-unnamed Second City revue, since Second City’s new permanent space at 1 York is currently being built and won’t be finished until mid-2022.

Last week, Comedy Bar posted a photo on its Instagram account of Back In Comfort, a tired looking mattress store, with the following words: “no comment.”

Members of the comedy community immediately took the bait, with improviser and actor Liz Johnston quipping, “FRIGGEN finally in the mattress biz” and comic Korri Birch saying, “Why buy a mattress anywhere else?!”

“Since you have to post a sign saying you’ve applied for a liquor license, we figured someone would see that Comedy Bar was opening there and would beat us to it,” says Gary Rideout Jr, co-owner (with James Elksnitis) of both the original Comedy Bar – at Bloor and Ossington – and the new space.

Rideout Jr. and Elksnitis chose the neighbourhood because it felt very similar to Bloorcourt before Comedy Bar went up 12 years ago. Except on the opposite side of the city.

“We feel it’s underserved in terms of entertainment choices,” says Rideout Jr. “Coal Mine Theatre is along the Danforth, and I’ve seen some shows there and think it’s great. Plus we’re just north of the Beach and on the subway line. So it feels like a good fit. People from downtown might complain that it’s too far east, but there’s a lot that’s further east, including Scarborough. We think it’s going to be accessible to a lot of people.”

Unlike the current Comedy Bar mainstage, which is long and narrow, the new space – which is set to open in late October – has a main theatre that is about 35 feet deep and 65 feet wide.

“It will feel more like the main level of Second City [on Mercer], but a bit smaller. Or imagine a slightly larger Tim Sims Playhouse,” says Rideout Jr, who’s the director of business development at Second City. “We’re theoretically aiming for 185 seats, but seating could be anywhere from 170 and 190. Of course, we’ll have an occupancy of whatever capacity is allowed by the province at the time.”

Speaking of Second City, a new revue will take up residence at the Danforth theatre before the permanent space along the Harbourfront is finished in 2022.

“We plan on having both the mainstage show and the touring company show at Comedy Bar Danforth,” says Carly Heffernan, one of Second City Toronto’s funniest alumna and its current creative director.

“The mainstage show will likely consist of some scenes from CERB Your Enthusiasm” – the show that briefly opened last fall before the second wave hit – “as well as some classic sketches and improv games. And the TourCo show will be a classic, holiday-themed revue. In early 2022, we’ll go back to the classic Second City process of building a new show.”

The basement of Comedy Bar Danforth has six studios – three on either side of a corridor – which will be used for Second City’s training centre. On one side of the corridor, the studios have convertible walls that can come down to create a performance space.

Second City has gone through some big changes during the past year-and-a-half.

In the summer of 2020, Andrew Alexander, the former executive producer and CEO of Second City, stepped down as EP. This was after Second City comics throughout North America signed an open letter about racial discrimination and erasure of Black artists at the institution.

The company was put up for sale in October 2020, then bought by private equity firm ZMC in late February 2021.

“Change doesn’t happen by changing one person, or by simply changing the faces onstage,” says Rideout Jr. “It’s about systemic change through every level of the company, and having a mandate saying that at every level these things will be looked at. It’s no one thing. It’s wholesale change. There’s a clean slate, from the ownership down.

“COVID has been a big part of the change,” he says. “It’s allowed us to take the time to make sure the work is being done, without the pressure of having to make sure a certain number of tickets are sold in a given week. And a lot of the team has been stripped down to focus on rebuilding.”

Second City will initially take up about 90 per cent of the Comedy Bar Danforth programming. Rideout Jr hopes some Second City fans will stay on and become Comedy Bar fans once the permanent SC building is complete.

“A larger, more robust comedy community in Toronto is good for everyone,” he says.