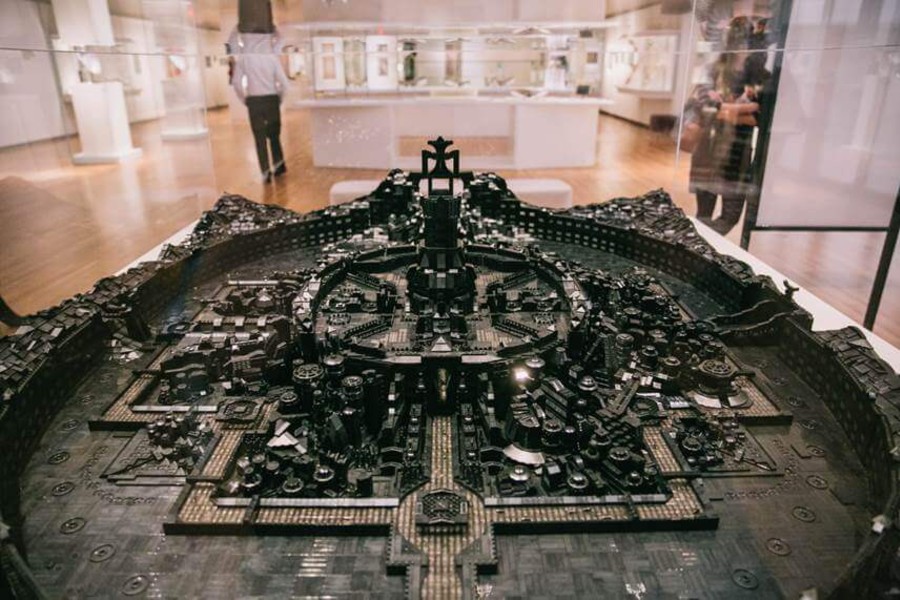 The 30-square-foot sculpture of 100,000 Lego pieces will be a permanent part of Aga Khan Museum's collection.

A sculpture made of approximately 100,000 Lego pieces by Toronto artist Ekow Nimako is the newest edition to Aga Khan Museum’s permanent collection.

The sculpture, titled Kumbi Saleh 3020 CE, is Nimako’s Afrofuturist reimagining of a West Saharan trade hub. It was originally the centrepiece for the Building Black: Civilizations exhibition the museum commissioned Nimako to create.

The artwork uses African imagery from 1,000 years ago to reflect on what 1,000 years into the future might look like.

Kumbi Saleh 3020 CE refers to the capital of the medieval kingdom of Ghana. The Ghanian-Canadian artist said in a statement that the museum provided him with the opportunity to explore his artistic craft and Ghanaian history.

“The piece represents an uninterrupted, uncooped narrative of Black civilizations that seeks to reclaim histories, reconcile ancestral traumas and imagine liberated futures for all African peoples,” he wrote in his artist statement.

Nimako said that as an Afrofuturistic creation, the 30-square-foot sculpture is a celebration and reimagination of Blackness “that is not constructed against the backdrop of enslavement, colonization and violence.”

The artist, whose work appeared on the cover of NOW in 2018, started using Lego pieces exclusively in his work in 2014. He says the medium captures architectural elements from the natural world and transcends its geometric form.

“With his sculpture Ekow not only honours his own cultural identity but also celebrates the vibrancy of African civilizations and their central role in world heritage,” Chagnon said. “It also reflects our ongoing efforts to open new windows on geographies often overlooked in Islamic art studies, including sub-Saharan Africa and southeast Asia.”

While the museum is currently closed to the public, interested viewers can watch Aga Khan’s online series on the experiences of Black artists, including Nimako’s 2019 talk at the museum.