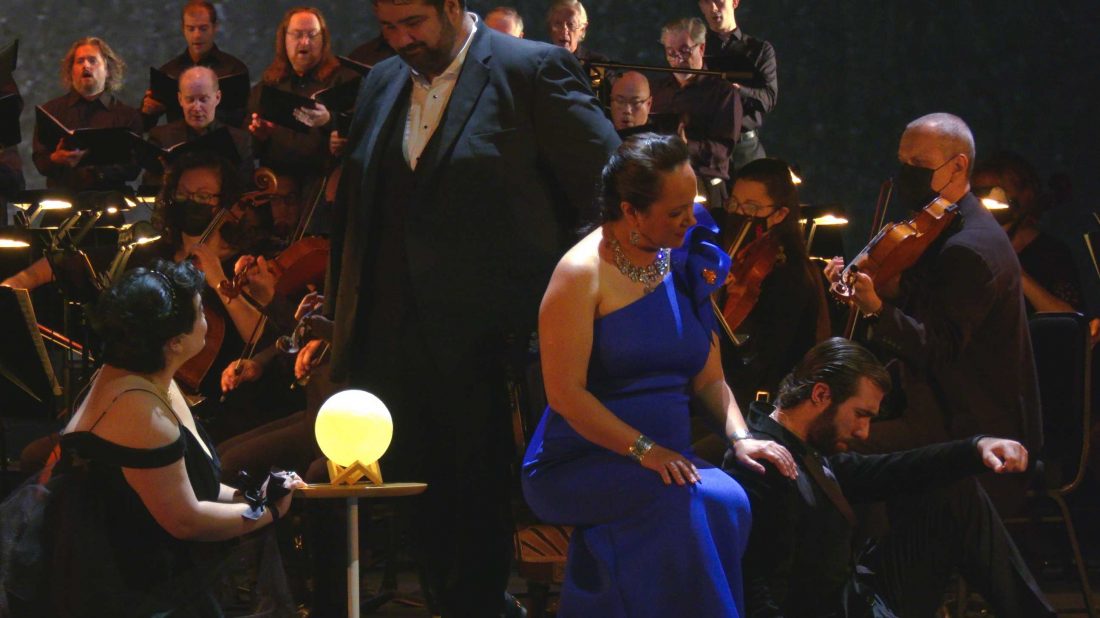 Photo courtesy of the COC

The last 20 months have been a time of enormous loss. More than 5 million people have died from COVID-19, millions more are still suffering, and the economic and psychological effects of the pandemic will linger for years to come.

So the Canadian Opera Company and Against the Grain Theatre’s new multimedia version of Mozart’s Requiem acts not just as a memorial but as a message of healing and hope.

Directed by AtG’s Joel Ivany, the show integrates a live performance by the COC orchestra, chorus and soloists – all performing at the Four Seasons Centre under the baton of music director Johannes Debus – with intriguing video footage and a series of interviews about how the soloists have been affected by the pandemic. Like Ivany and AtG’s version of Handel’s The Messiah, which went viral last year, this is something special.

In a pre-show interview between Debus and Ivany, the two discuss the work’s mystique and the fact that its fabled commission was a big (fictional) plot point in the film Amadeus. Debus also describes the wild contrasts in the music, which one moment rages with fire-and-brimstone terror and the next approaches a kind of transcendent spiritual plane.

Debus achieves those contrasts from the COC orchestra, who play with grace, dignity and urgency. The excellent soloists – soprano Midori Marsh, mezzo Marion Newman, tenor Andrew Haji and bass Vartan Gabrielian – blend their voices beautifully. And Ivany stages their performances as if they’re in deep conversation – with each other or, occasionally, with themselves or a higher being. The only drawback from the live performance is it’s missing the rich, full sound of a full orchestra and choir that would echo around the great hall. At home, you’re limited to what your screen or device’s sound system can produce.

I have mixed feelings about the work’s interview segments. It’s illuminating to hear the four soloists discuss the losses they’ve experienced over the past year and a half – be they personal, professional or otherwise; Haji’s reflections on being a new father and Gabrielian’s mourning of a father and the priest who first discovered his talent are especially poignant.

Occasionally the interviews deal with themes from one of the Requiem’s movements; Newman’s reflection on the cleansing and renewing quality of water and Marsh’s discussion about kindness lead beautifully into the Benedictus. But often the interviews interrupt the piece’s momentum.

More successful are the video sequences, whether featuring the quartet of soloists on a beach in the Bluffs or providing a soothing dramatic backdrop for the stage (Taylor Long is credited as director of photography).

The simple but profound way Ivany stages the finale is too moving to be spoiled in a review. It will make you think about your own sense of loss. And it will also make you long for the day – not too soon in the future, let’s hope – that we can all return to the theatre.