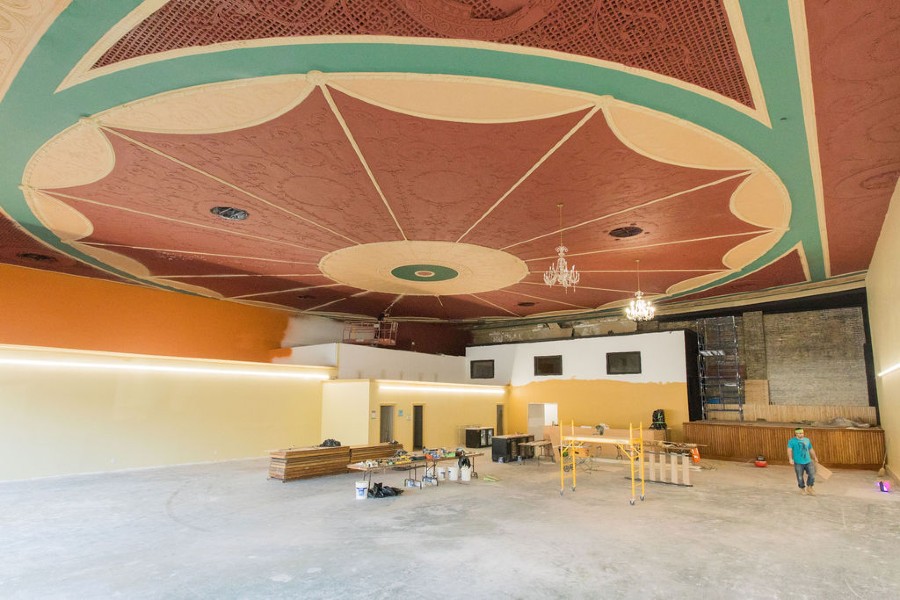 The Parkdale Hall under construction. Historic ceiling fixture above, stage in right corner.

One of Toronto’s most historic event venues is coming back to life – slowly.

Parkdale Hall (1605 Queen West) dates back to 1920, when it was an opulent theatre and cinema. Then known as the Parkdale Theatre, it was one of three spots owned by the Allen brothers; the other two were the Allen Theatre (later the Tivoli) and what is now the Danforth Music Hall.

There was a whole orchestra pit for musicians to accompany silent films, and later vaudeville and other variety shows. In those days, the theatre could fit 1,500 people. Over the years, it was entwined with the city’s culture and even a few vulgarity scandals. Eventually, due to dwindling attendance most likely caused by the rise of television, the theatre closed in 1970.

Check this out! First opened on April 5th, 1920, The Parkdale had a spectacularly ornate ceiling and 1500 seats. #theparkdale #parkdaletheater #torontoheritage #eventspace #toronto

That history was hiding in plain sight. The space was at one point a beer store and was most recently home to the Toronto Designers Market. But aside from the occasional nostalgic blog post or Instagram memory, the building was mostly taken for granted.

Alex Chan didn’t know about the history when he was first scouting the space for a retail cannabis business, but something caught his eye.

“I went into the back closet, which is where the stage used to be, and I looked up,” he recounts, standing outside the venue while taking a break from overseeing renovations. “I saw these rosettes on the ceiling, kind of peeking out. And I was like: What is that? Why is that there?”

“So I did some more investigation into this building. I discovered it was the theatre, read a bit more about its history and thought, wow, this is such a hidden gem in Parkdale. It has to be revealed, it has to be shown to the public. So I thought, well, why don’t I do it?”

His first step after leasing the space was uncovering that beautiful old red, orange and green ceiling. An original design feature, it stretches the entire space.

Now Chan is reconstructing the whole venue, grinding down and replacing the floors, painting, building a bar, putting in lights and speakers and adding a kitchen. The “serial entrepreneur,” whose background is in real estate, changed all his original plans. He’s turning Parkdale Hall into a multi-use event space that he hopes will one day be one of the city’s premiere event venues, along the lines of the Great Hall.

Though the big, open space is very much a work-in-progress, Chan has already opened the doors. The flagship event, the Parkdale Antiques and Collectibles Market, is now running every Sunday.

It’s good timing to do an antiques market now because many brick-and-mortar antique stores have been forced to close during the pandemic, he says. Some of the older vendors haven’t made the transition to online selling. This gives them a place to hawk their records, vintage magazines, jewellery and furniture.

Chan wants the venue to fit into the neighbourhood and is careful not to be a gentrifying force in Parkdale.

“This whole stretch of Queen Street here is known for antiques,” he says. “But it’s kind of been fading recently because of COVID and a lack of energy. My hope is that I can bring new energy to the antique community in Toronto and also revitalize this area for the benefit of my neighbours.”

Chan acknowledges the precariousness of starting an events-reliant business during the COVID pandemic, but says the opportunity felt too good to pass up. The Parkdale Hall is opening slowly and in phases, introducing larger scale events once it becomes safe to do so.

Right now, the focus is on markets. In addition to the weekly antiques market, he’s in the loose stages of planning a war memorabilia market, a vintage and contemporary fashion market and a vinyl record fair. He’s talking to Good Food Markets about setting up a market for food security.

Parkdale Hall is sticking to a 35-person capacity, strictly enforcing social distancing protocols and controlling the flow of traffic. Eventually when COVID is over, Chan thinks the hall will fit 300-400 people seated and around 600 standing.

The plan then would be to open the stage for local musicians, DJs, comedians, sports screening parties and art galleries; and then eventually dinners, banquets and weddings. He wants to store a lot of equipment so the space can be flexible and transform into any type of event venue based on what people need it for. Chan and his father also hold the lease for the two next-door properties, which will eventually be a cafe serving Ethica coffee (which also fuels their weekly markets) and that long-planned cannabis store.

For now, though, they’re letting the opening plans shift based on the neighbourhood, and also the history of the venue.

The Parkdale Hall will throw a grand opening at the antique market on November 8. By that time, Chan says, the sign will be up.

Did you know that 1605 Queen St W used to be the Parkdale movie theatre?

“That’s a show piece in itself,” he says. It will be nearly 10 feet tall, six feet in diameter, backlit with the logo and name and there will also be an old-school letter board theatre-style marquee.

If all goes well, the Parkdale Hall will light up the neighbourhood like it used to.