Review: Boy Falls From The Sky soars to great heights 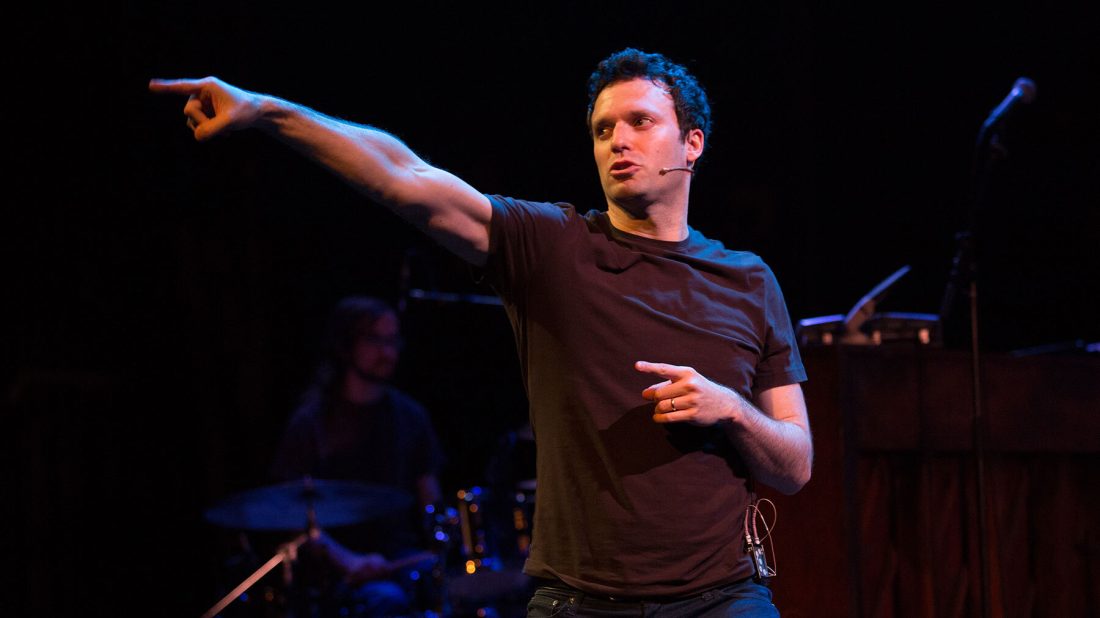 The expanded Mirvish remount of Jake Epstein’s 2019 Fringe hit Boy Falls From The Sky had to be postponed twice because of the pandemic. And during that time it even switched venues from the CAA to the Royal Alexandra Theatre. But it was worth the wait. Epstein’s account of his ambivalent relationship to show business is, as Christopher Hoile wrote in his original NOW Fringe review, “cabaret of the highest order.” Now it’s been given a production and venue that make it soar even higher.

Epstein’s passion for musical theatre began as a kid, when he and his family would pack up their minivan and drive from Toronto to New York City for trips. During those 10-and-a-half hour rides, he and his sister would sing along to show albums, trying to imitate the performances. And then there was the magic of seeing shows in person. That gradually led to auditions (he won a small role in Soulpepper’s Our Town, then a bigger one in Oliver! at the Princess of Wales), studies at the Claude Watson School for the Arts and eventually got a role in the hit TV show Degrassi: The Next Generation. (Yes, he knows Drake and went to his bar mitzvah.)

Eventually, though, Epstein set his sights on bigger things: namely, Broadway. And soon he earned roles in the tours of Broadway hits like Spring Awakening and American Idiot. After moving to New York, his dream finally came true and he got to play the lead in a Broadway show, the mega-budgeted Spider-Man: Turn Off The Dark. A bit later, he originated the role of Gerry Goffin in Beautiful: The Carole King Musical.

While all of that is impressive, and Epstein would outwardly tell friends and family things were going great, the truth was more complicated. He internalized a lot of pain, like audition rejections – sometimes for arbitrary reasons, like his height – stage fright, insecurity over reviews, vocal damage and most disturbing of all, injuries on the set of the controversial Spider-Man.

And then there was the psychological damage he incurred while performing in Beautiful. Because his character had, thanks to script cuts, turned into the show’s antagonist, during curtain calls he would receive boos.

Not that any of this comes across in the show as whining. Epstein, outfitted casually in T-shirt, jeans and sneakers, exudes modesty and gratitude. He knows how lucky and fortunate he has been to have realized his dream.

What makes the show so artful is the way Epstein and director Robert McQueen integrate songs to help illustrate the story. The cheerfulness of Oliver!’s Consider Yourself suggests the camaraderie of an impressionable kid joining a troupe of actors. Many years later, two versions of the Green Day song Give Me Novocaine (from American Idiot) evoke both the strain put on Epstein’s vocal cords after he’s told to sing a certain way, and the loneliness he feels while touring North America in a hit show. And in the lyrics to Boy Falls From The Sky he finds a perfect expression of his mixed feelings for the art form he once loved so much: “You can change your mind / But you cannot change your heart.”

There’s plenty of emotion in the show as well, particularly in a story about how Epstein reunites with an ex-girlfriend back in Toronto. His chronicle of a day spent together in New York City ends with one of the show’s most moving numbers, his heartfelt rendition of the gorgeous ballad Gold from the show Once.

McQueen’s production is simple yet effective. With the walls of the Royal Alex visible behind it (as if to strip away any illusions), Brandon Kleiman’s set resembles a bare studio space. It’s tilted so one angle juts out towards the audience, and Epstein often performs here, strumming his guitar and singing, supported by a lively three-person band (David Atkinson, Lauren Falls, Justin Han). A ladder leads to an attic-like space filled with boxes of theatre memorabilia. The way Epstein uses that ladder is ingenious, especially in partially recreating one of the big show-stopping scenes from Spider-Man.

During the great pause of the pandemic, the theatre industry has started re-examining its practices around hiring, auditioning and taking better physical and emotional care of its artists. And even outside the entertainment industry, many people have begun seriously questioning what they’re willing to put up with.

In that context, Boy Falls From The Sky feels even more timely and relatable than it did before. But the show’s appeal is universal. And its belief in the magic and power of theatre endures, especially in Epstein’s brave, truthful and triumphant performance.