Review: Light could use a bit more shading

At the Tarragon, Rosa Laborde's new play about enlightenment and forgiveness has its heart in the right place 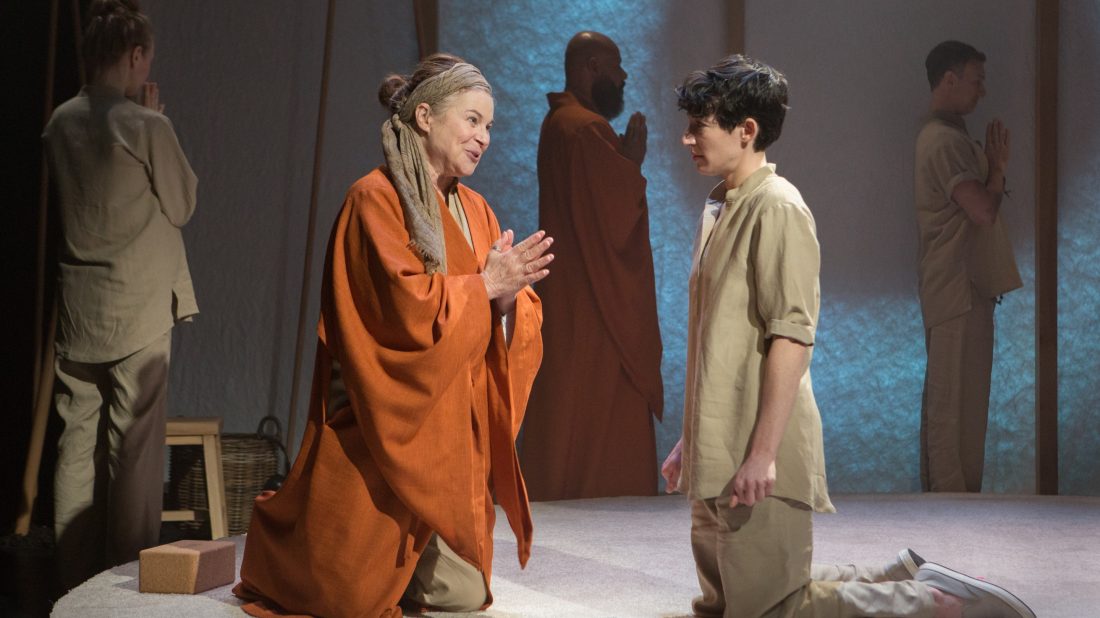 Let’s face it. We’re living in judgmental times. Everyone thinks they’re on the right side of big issues and we’re all too eager to call people out when they fail us. Rosa Laborde’s fascinating if flawed new play dares to explore the complexities of one such situation.

The play begins in an ashram on top of a mountain somewhere in the Rockies. Newcomers Willow (Sara Farb) and Valentina (Maria del Mar) are welcomed in and instructed by the group’s non-denominational spiritual leader, Theo (Maurice Dean Wint), not to speak to others for 10 days. They plant seeds and peel carrots for their vegetarian meals; they do laundry; they practice meditation and learn, via Theo and his partner Mukti (LInda Kash), to let go of what they thought of as their identities.

Willow and Valentina seem to bond in their wordlessness, but when their initiation period is up and they’re allowed to talk, they realize they’ve misunderstood things about the other – a subtle hint at the larger revelations to come. Meanwhile Willow, a writer, learns things about the retreat’s members, like Angie (Christine Horne), a chatty woman from Sarnia who’s constructing a miniature replica of her former life for the child she’s carrying, and Jesse (Philip Riccio), a gardener and yoga instructor. Both seem to be fleeing troubled pasts.

Willow, sensing a scandal, wonders about the father of Angie’s baby, and she’s also skeptical about Michael (Hardee T. Lineham), the founder of the retreat who talks in literary and philosophical circles. And for some reason she’s drawn to the group’s youngest member, Beni (Shakura Dickson), Theo and Mukti’s daughter.

While the early scenes have a hypnotic pull as they play out in vignettes on Michael Gianfrancesco’s soothing, wood-and-paper-based set, there’s little tension or momentum, and it’s hard to grasp anyone’s motivations. (I realize this might be intentional, since the retreat’s members are instructed to give up their desires.)

Soon a frustrated, wounded Willow uncovers some secrets about various people, creating conflicts. The way Laborde deals with the fallout of Willow’s discoveries – I’m being intentionally vague so as not to spoil anything – is bold and challenging. This is a play that begins slowly and meditatively, and gradually takes on complex layers.

But in director Jackie Maxwell’s hands, the script and production feel unbalanced. Perhaps if Laborde had played around with chronology a little, or hinted more at Willow’s initial resentment, the material and its themes would land with more power. That said, the final moments, which make us rethink what came before, are full of heart and a rich understanding of human behaviour.

Farb does a lot with her underwritten role, Willow’s posture and cynicism acting like armour. Horne and Riccio, too, deliver performances rich in subtext, hinting at the things their characters have tried to escape. Most memorable are Wint, whose calming presence and hypnotic voice could persuade anyone to join the group, and Kash, who eventually emerges as the play’s most interesting figure in a performance that is funny, wise, forgiving and deeply humane – all things we could use in the world right now.