On the eve of her latest show, the amazonian mover and shaker gets ready to say goodbye to dance... but not performance 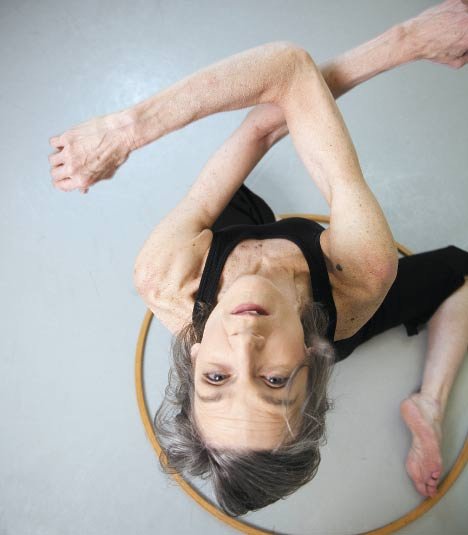 Mention the name Peggy Baker to anyone who loves dance and their eyes will widen, they’ll try to recall their favourite work and eventually, as if describing a trip to one of the wonders of the world, they’ll say two words: “Those arms.”

Baker is our Cronenberg of the dance studio, our Atwood of the long extensions (those arms, again). But imagine if the former only directed low-budget indie pics, or the latter published short stories in modest-circulation journals.

“What I do is like chamber music,” says Baker. “Sure, dance can work as spectacle and as a display of virtuosity, but I want you to witness the human body, which gets so sexualized and commercialized in our culture. It’s a privilege to be able to look at it up close, to feel the vulnerability, imperfection and humanity.”

You can’t get much closer than where I am right now, in a studio at the National Ballet School, where the Amazon-like dance artist has an office and has been artist-in-residence for eight years.

She’s just overseen a run-through of the difficult trio from her upcoming mixed program, confluence, when suddenly she rises from her perch on a stool and glides into a duet with dancer Larry Hahn, performed almost completely on the floor.

The effect is startling, like seeing a painter rise from in front of her canvas and replace her model. Vulnerability and humanity? Yes. Imperfection? Hardly.

There’s a Baker solo, the genre she helped perfect in a decades-long career after touring with Lar Lubovitch’s company and collaborating with Mark Morris and Mikhail Baryshnikov on the inaugural White Oak Dance Project.

There’s her trio featuring emerging or mid-career dancers Sahara Morimoto, Kate Holden and Sean Ling. And then there’s the concluding duet, created for her and Hahn by dance great Doug Varone. Baker’s in her mid-50s, Hahn is 60.

The three stages of dancehood?

“This show is a kind of visualization of where I am,” says Baker afterwards in her office, clad in a black Lululemon training outfit. “Ordinarily, the male-female duet would result in mating, there’d be the possibility of fertility. But I find it beautiful and touching that it’s impossible because of the age of the two characters.”

There’s no self-pity in her words, just an artist’s sharp assessment of the truth. She’s getting older and can’t do the things she used to.

And here’s the inevitable bombshell that no one who loves watching her make major moves into her later years wants to hear.

“I’m in a departure state as a dancer,” she says. “This isn’t the very last thing I’ll do, but I’m in the process of leaving my dancing life behind me.”

No doubt the fact that she broke a bone in her foot two and a half years ago went into that decision. Baker was forced to cancel a series of performances of works by James Kudelka and Molissa Fenley.

“I was able to sustain a high level of physicality for a very long time, and almost felt like I’d be able to do this forever – or for as long as I wanted. Now I know I can’t. After I’d healed, I performed the pieces separately, but not on the same bill. And I realized that some things weren’t appropriate for my body any more.”

Not that her performing career will be finito. She’s set to collaborate again with writer/actor Michael Healey, who paired with her in Denise Clarke’s dance theatre hybrid Radio Play after Hahn got injured. Director/co-creator Daniel Brooks is also involved: good company.

As well, she wants to re-team with Sarah Chase on a combination dance/storytelling piece. Their first collaboration, The Disappearance Of Left And Right, showed off Baker’s natural acting skills – she did some training in the University of Alberta’s theatre program before moving to dance – as she told stories about her prairie ancestors and a hilarious meeting with dance legend Martha Graham.

“That first time, I asked Sarah if we could avoid referencing certain parts of my life,” she says. “She respected that.”

Back then, Baker was in the midst of making decisions about the living situation of her partner, composer Ahmed Hassan, who has advanced MS.

“Ahmed’s been in a nursing home for almost five years,” she says. “A huge part of that journey is completed, and I think it’s the kind of journey many people will take – with a child, a parent or a partner. So it’s very likely that Sarah and I will go to that personal place, including dealing with the irony of his quadriplegia in relation to my life as a dancer. It’s such a strange….”

She stops to show me a picture of Hassan on her office wall, looking healthy, then continues.

“His hands now are completely folded up. But he can move his left index finger to express a huge amount of information. If you’re helping him eat, he’ll use that finger to say, ‘Not yet’ or ‘Okay now’ or ‘I’m thirsty.’ He’s such an important part of my life that I can imagine in a few more years I’ll be able to explore it with Sarah. I would totally trust her.”

You get the sense that even with her impressive resumé – which includes co-founding Dancemakers back in 1974 – Baker would rather look forward than back.

“They’re just memories now,” she says. “I know they changed me and made me who I am. That’s partly why I still teach, move and choreograph for other people. You have to keep working with these things to keep them alive.”

She wants to keep things small. She frequently collaborates with pianist Andrew Burashko. Her trio is the biggest thing she’s choreographed yet. When I mention a dream gig – say, choreographing a piece for the National Ballet of Canada – she smiles and shakes her head.

“I’d rather show things in more intimate settings – the Richard Bradshaw Amphitheatre rather than the mainstage. I’m talking with the AGO about creating dances for different galleries. And I loved my recent Nuit Blanche experience.”

Small-scaled, then, but never small-minded.

Last year, accepting the Governor General’s Performing Arts Award for Lifetime Achievement, Baker made a point in her speech about embracing androgyny and deploring gender stereotypes. Not the sort of chitchat Michaëlle Jean and other VIPs and civil servants are used to hearing.

“I think that’s why I’m not a ballet dancer,” she explains. “Ballet is about dividing men and women. Women dance on pointe shoes, boys and girls don’t take class together. You also see it in folk dancing, where women do one step, men do another.”

If anything, she wants to present more authentic and varied images of women through dance.

“There are two very clear lines in a female life: the window of fertility, where images of women dancing have traditionally fallen. And the one afterwards. I’m interested in dancing beyond that point, and I also want to address subject matter that isn’t boy-meets-girl.”

Proving that many of her dances aren’t gender-specific, Baker’s taught several of her notable solo works to male and female dancers in her Choreographer’s Trust series. She shows me a photo from one of her dances featuring a dancer wearing a gender-obscuring costume that could be armour. Those long, lithe arms are a giveaway that it’s her.

Baker on the dancers in her trio:

Baker on using the space and working with an ensemble: