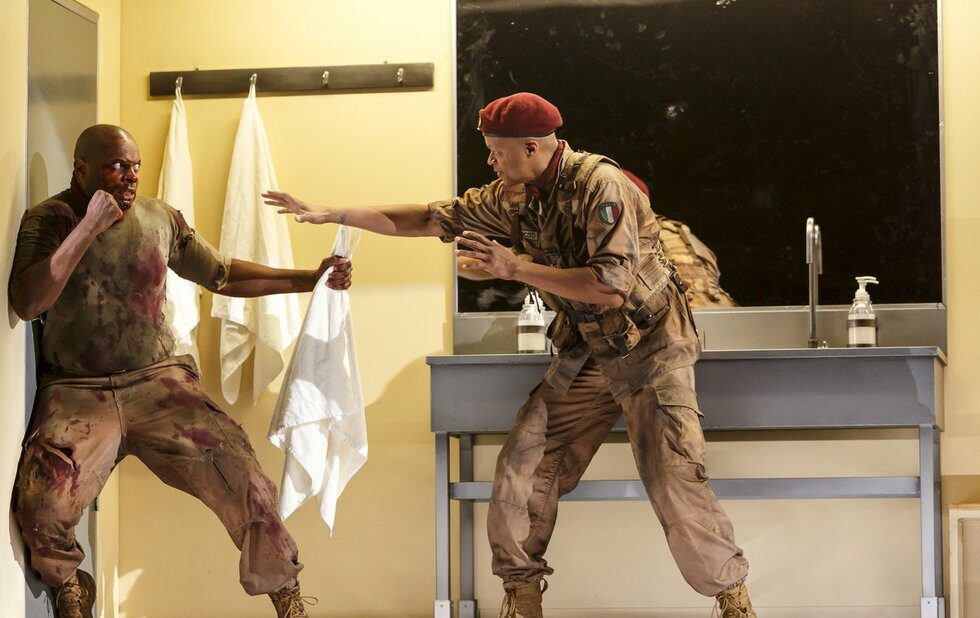 Andre Sills (left) and Michael Blake battle it out in Coriolanus.

The tale of the fearless military leader Caius Martius (André Sills), later named Coriolanus after he captures the Volscian city of Corioli, has a few structural problems. The action can be choppy, and the central character – whose pride prevents him from appealing to the common people, even when he’s thrust reluctantly into the political spotlight – unsympathetic.

Lepage, who’s both director and set designer, solves the first challenge with his signature marriage of technology and art, using film-like techniques to move gracefully from scene to scene. I don’t want to give away too much, but Lepage’s evocation of everything from combative phone-in shows to bougie bars where politicos gossip and restlessly scan TV channels to hear breaking news reports always gives us something intriguing to look at while we’re getting information.

Action is character, and Lepage always has his people doing things, whether it’s working on a tapestry, playing a game of darts (which takes on grimly funny symbolic weight) or, in a stunning, wordless sequence that lets the audience comprehend Coriolanus’s exile, drive all night from one place to another.

As for Coriolanus’s gruff, unsympathetic nature, Lepage is aided by Sills’s hulking, glowering presence and interpretation – he’s a man more comfortable on the battlefield than at the podium.

There’s a small, telling moment when Coriolanus grudgingly goes door-to-door to elicit the fickle public’s support, and when he encounters a deaf woman – someone who, thanks to an interpreter, gets the literal meaning of his words but not the arrogant manner in which they’re delivered – she buys in.

Aufidius’s literal homosexuality, shown in a scene between the man and his Lieutenant (Johnathan Sousa), provides another layer of motivation for the former’s later actions.

This world is so completely imagined that a scene involving a child’s toy soldiers furthers the action and suggests the passing of military machismo from one generation to the next.

The technically dazzling production would be heartless without fine performances, and besides Sills – who’s always been great at suggesting barely contained anger – Peacock and Abbey, Lepage gets brilliant supporting work from veterans Tom McCamus, Stephen Ouimette and Tom Rooney, who, snazzily outfitted by costume designer Mara Gottler, bring their political backroom types to vivid life, speaking the language with total confidence and authority.

Even one of the play’s notoriously flawed scenes, during which we hear information we already know from two minor characters, gets goosed by Lepage with a nod to contemporary technology that is completely apt and very funny.

In an era in which public figures can be brought down by a tweet, this production is timely and urgent. Don’t miss one of the best shows of the year.