Beloved Bloordale sandwich shop is back with a new look, a bigger menu, and plans for new locations 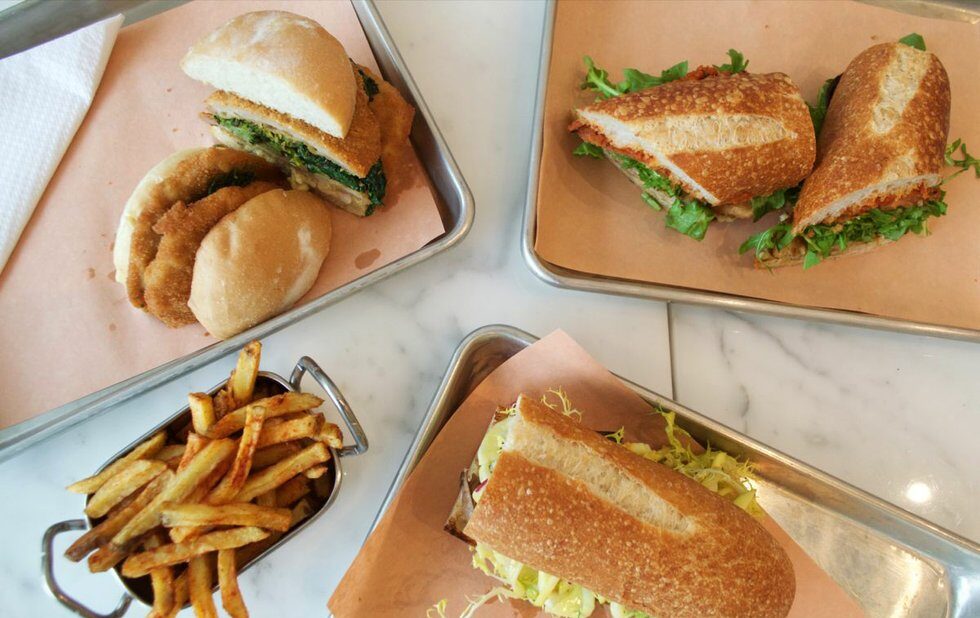 Brock Sandwich (1260 Bloor West, at Emerson, 647-748-1260, brocksandwich.com) is back after a devastating fire, thousands of dollars in repairs and a gruelling 14-month battle to reopen.

“We learned how to build a restaurant from the ground up again,” says founder and co-owner Dominic Amaral, sitting at the brand-new bar in the gleaming, newly tiled dining room.

“Truly, it’s something I wouldn’t wish on anyone. It was pretty terrible – a lot of sleepless nights. 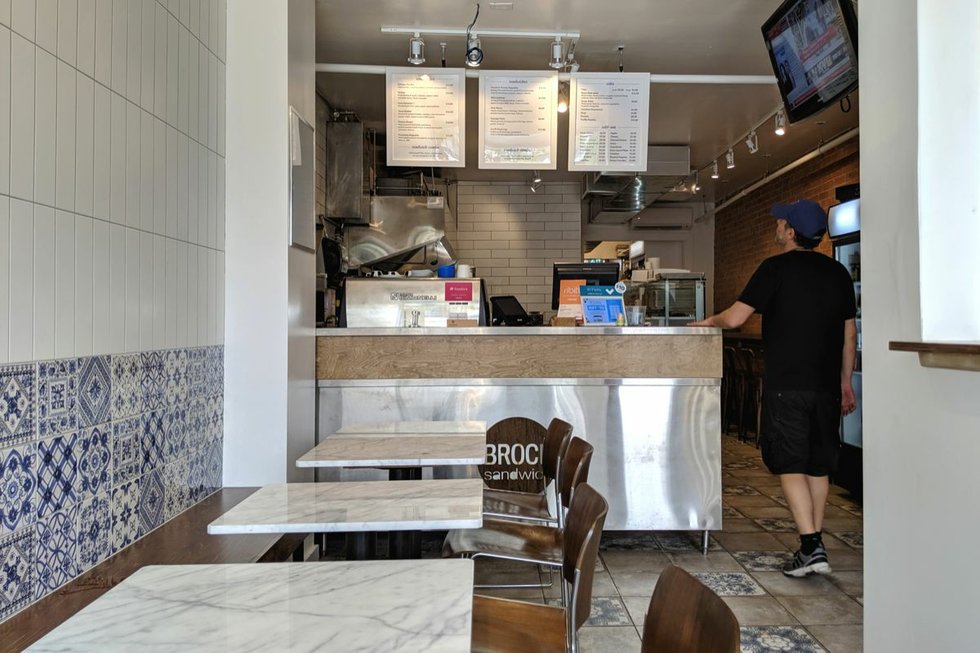 Amaral was in the middle of dinner service on March 24 when, staff say, the deck on the apartment above the restaurant caught fire. “One of my employees said, ‘There’s a fire in the back.’ I said, ‘Nice try.’ And then I walked out to the front, looked up, and there it was, torched.”

Amaral ordered everyone to get out of the restaurant and remembers that as they were pushing customers out, others were still trying to get in.

He headed in one last time to make sure no one was left. “This disgusting wall of black smoke just rolled out toward the front of the restaurant.

No one was hurt, but the fire also prompted the closure of adjoining businesses South Indian Dosa Mahal and Vito’s Barbershop as well as displacing the tenants in the upstairs apartments. In the fire’s wake, Amaral and his staff found themselves on the receiving end of an outpouring of support – and grief.

“It was kind of hilarious – the day after the fire, I personally was consoling, like, eight customers. I had their head on my shoulders, and I’m supporting them and trying to make them feel better.” 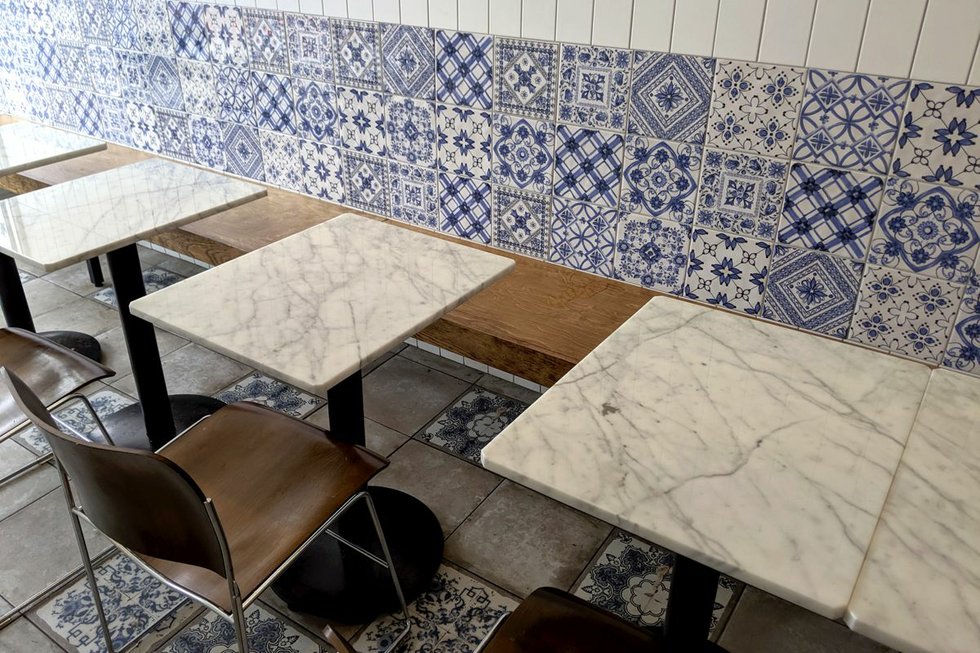 Amaral also had the support of his staff, including Greg Ponte, a longtime employee who decided to come on board as co-owner after the fire. “I wanted to give him a little confidence that his teammates were sticking with him,” Ponte says.

Though some might have cut and run, Ponte says the goal was always to reopen: “Dom’s put his life into the restaurant for the last seven years, so he wasn’t about to just walk away.”

But the interior was unsalvageable due to smoke and water damage. Though insurance paid for 80 per cent of the staff’s salaries (all but two employees stuck around until the reopening), a number of other complications arose.

First, Amaral had upgraded the restaurant’s equipment over the years, to the tune of $100,000 — but their insurance policy hadn’t been updated to reflect the added value. Adding to that, a $25,000 payment Amaral said their insurer had promised to cover food spoilage was rescinded.

To cover the gap, Amaral and Ponte took out personal loans, and neighbours (including Ubisoft, who donated $1,000) helped the shop raise $10,000, which they used for tiling and electrical work. Many of the shop’s neighbours and customers also came in and helped with the renovations.

Faced with the prospect of rebuilding from scratch, Amaral and Ponte decided to create the interior they didn’t have the chance to build when Brock first opened in 2013. (The storefront was originally a massage parlour, which meant most of their budget went to putting in the kitchen.)

They added a mix of Portuguese and subway tiles, put in more tables at the front, and narrowed the kitchen to add a long rail of bar seating along an exposed-brick wall they uncovered during the renos.

“Now, we’re able to take care of a family of four, and we couldn’t do that before,” Amaral says. 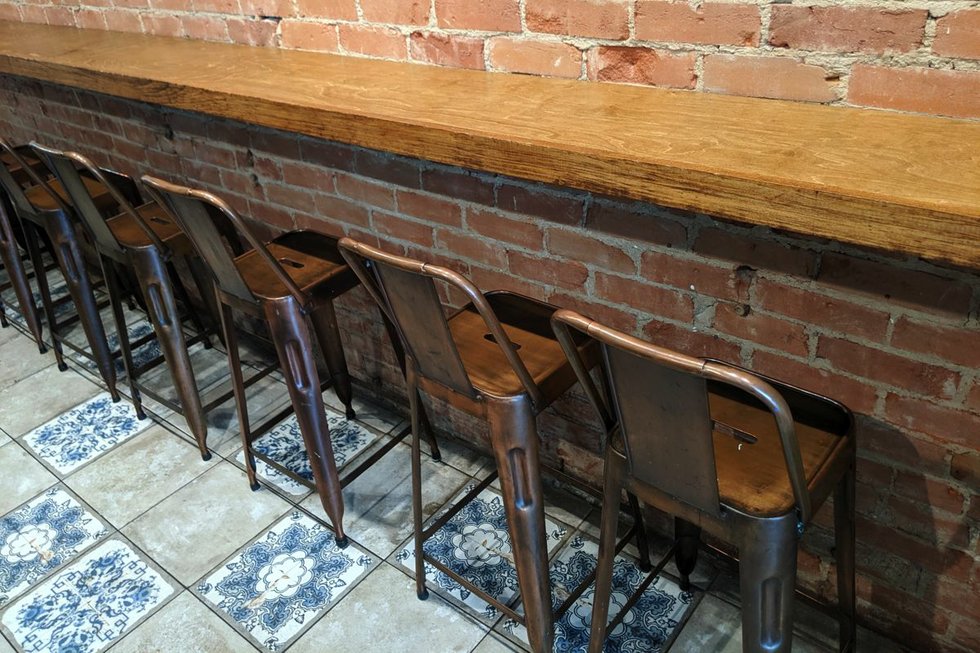 In their efforts to give the people what they want, they also rejigged the menu, keeping all the sandwiches and sides their customers spent a year jonesing for while adding a few popular specials to the permanent lineup. They also turned nearly all of their sandwich toppings into add-ons that can be parked atop any salad, sandwich or order of fries.

“It gets a little crazy – you get into these $30 sandwiches,” Ponte says. “We’ll do whatever you want. We may not agree with it, but we’ll do it.”

So far, business is even better than expected. And in other good news, their next-door neighbour Vito is almost ready to reopen his barbershop, while renovations are slowly but steadily underway at South Indian Dosa Mahal.

Although the experience was “traumatizing”, Ponte says they’re trying to stay positive, treating the rebuild as a hard-won lesson — especially as they prepare to open even more Brock Sandwich locations in the not-too-distant future.

“We’re trying to look at it as an upside, as much as it was a stressful year,” Ponte said. “We got a bit of an upgrade to our place — not the way we wanted to do it, but what can you do?” 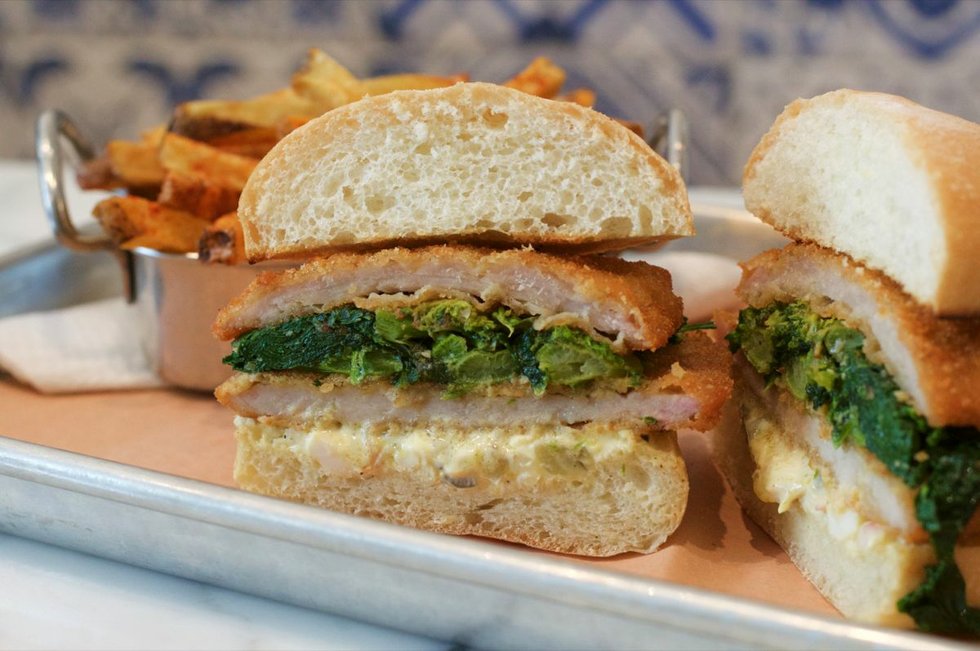 The pork schnitzel sandwich ($12) with spicy rapini and sauce gribiche is one of the specials promoted to the permanent menu. 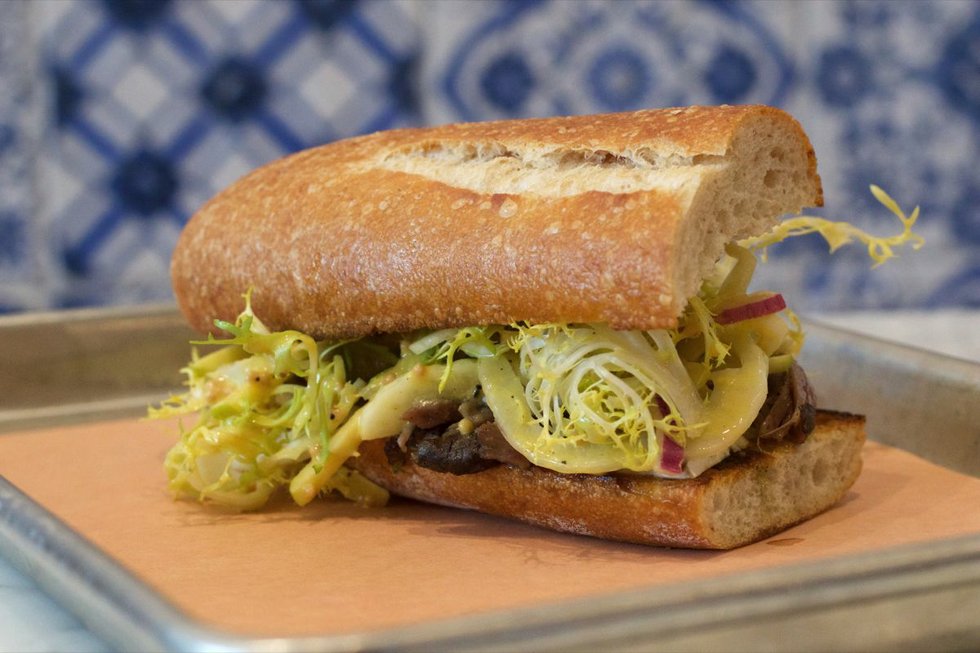 Another former special: The duck leg confit sandwich with camembert, frisee lettuce and fennel in a mustard dressing ($14). 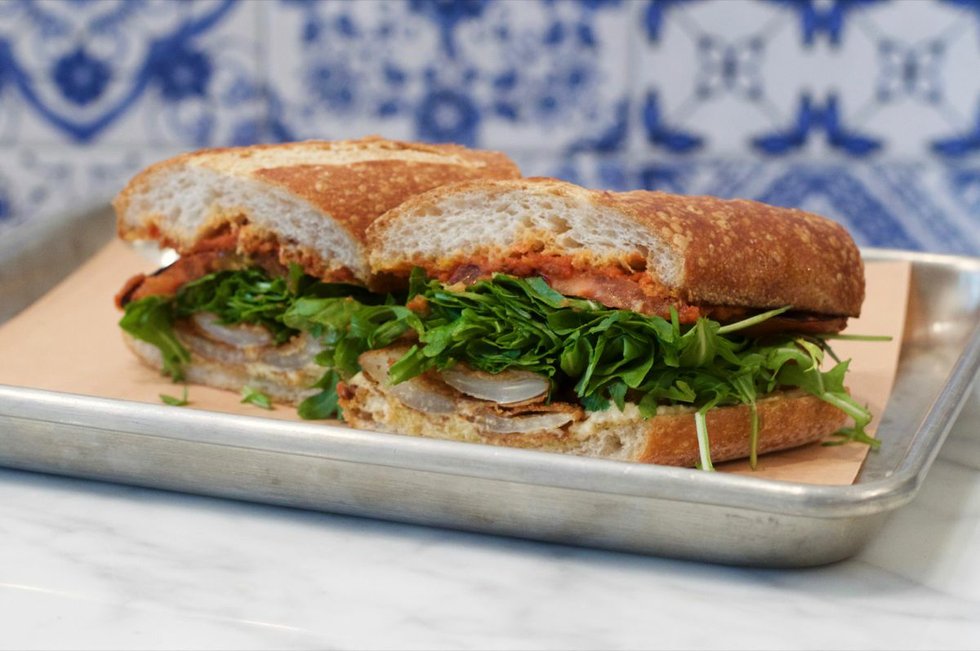