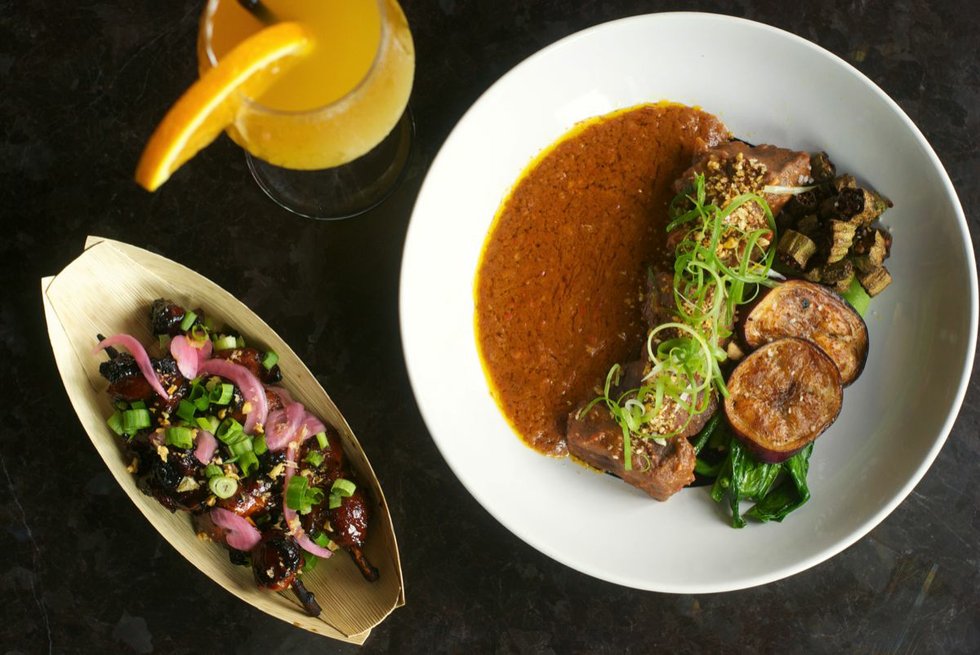 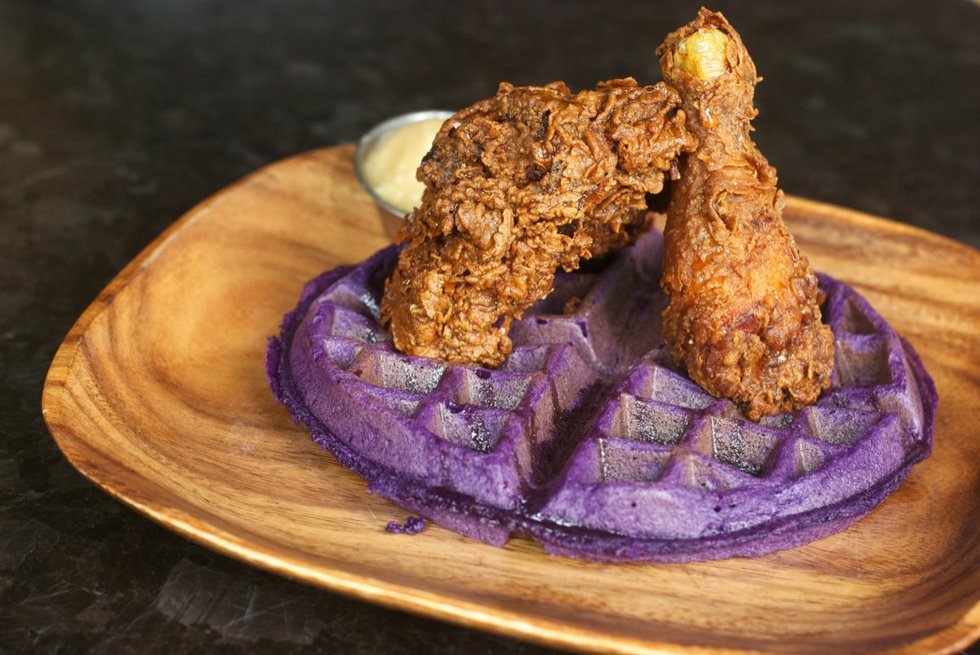 Baldwin Village’s Platito fits right in with every other cool small-plates joint in the city: a gorgeous two-floor space (formerly the home of Agave y Aguacate, then Reforma) with a modern look, tropical touches, a hip-hop soundtrack and a sunny front patio. But there’s plenty that many Toronto diners won’t immediately recognize, given the lamentable lack of Filipino food in the downtown core – until now, anyway.

Sisig, palabok, kare-kare and lechon kawali pepper the lunch and dinner menus. Most of the brunch dishes come with garlic-fried rice. Even the excellent fried chicken – the breakaway hit dish and only concession to “fusion” – comes perched on top of a fluffy waffle stained a striking grape-purple with ube (purple yam) extract.

Thus far, Filipino restaurants in the GTA have mainly been mom-and-pop shops in the burbs serving big family gatherings or cranking out catering and takeout. Platito brings those dishes within range of a young downtown crowd – whether that’s newbies to the cuisine or young Filipinos who haven’t picked up their parents’ recipes.

“A lot of the Filipinos in Toronto grew up eating at the table [instead of at restaurants], and now, if they’re not living with their parents any more, they don’t know where to get it,” offers Aaron Calupig, who co-opened the place with his godfather, Jonathan Mirasol, and his cousin, Derek Linay.

“First-generation Canadians were taught by their parents how to cook the food or else it’s just not passed on. They’re not cooking it – so where are they going to go?” (Somewhere with killer white sangria and cold bottles of San Miguel beer, obviously.)

The most obvious comparison to Platito would be Queen West’s Lamesa, which enjoyed a well-deserved bump in popularity when Daniel Cancino took over the kitchen last year. But where Cancino takes elegant liberties with the classics, Platito chef Karlo Cunanan (formerly of Momofuku Noodle Bar) does homestyle recipes he picked up from his grandma and aunt, then gives it the kind of plating befitting a downtown hot spot.

“We’re not trying to just put it on a plate and there you go,” Calupig says. “We’re presenting it in a colourful and flavourful way – especially for non-Filipinos who want to try Filipino cuisine.”

And so the hearty peanut oxtail dish kare-kare ($16), normally a steaming stew ladled over rice, is flanked by little rounds of crispy-fried bitter okra, green beans and bok choy. Those in the know get extra bagoong, sweetened shrimp paste, to mix in to kick up the umami factor.

Sisig, a sizzling chopped pork dish, comes topped with a fried egg and a drizzle of mayo in a piping hot pork skillet ($15). Sweet marinated BBQ pork ($10) is charred to ruby-red perfection and served on skewers, then scattered with purple and green onions. It’s a feast for the eyes, gut and soul all at once. 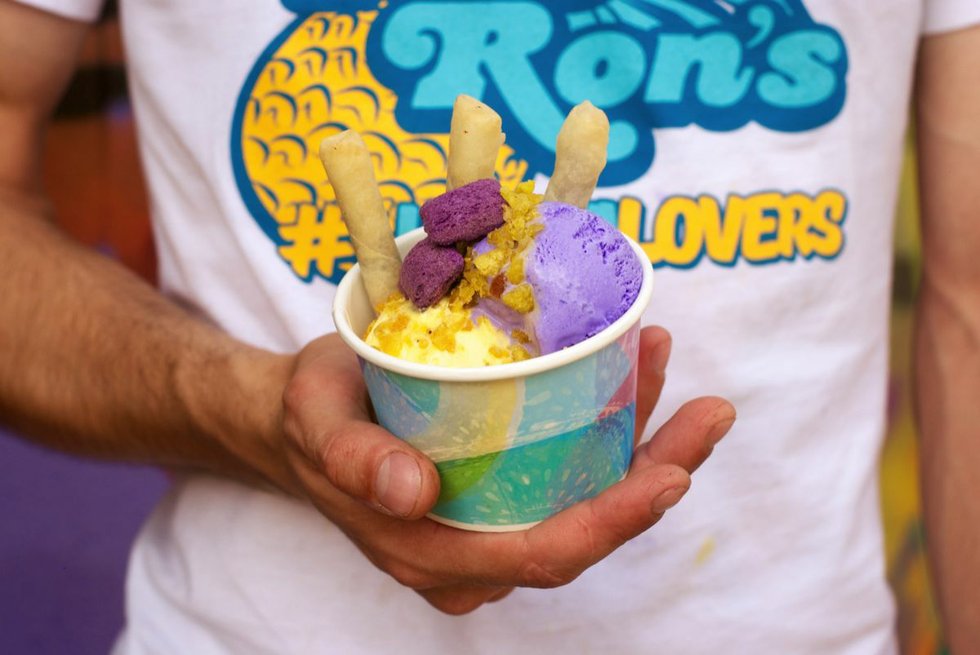 The story of Tristen Petate and Mike McFarlane‘s food stall starts like many, many other modern partnerships: a match on Tinder, then hours spent bonding over food. In their case, Petate introduced McFarlane to her family’s Filipino staples – and he promptly fell in love all over again.

“It’s like opening a time capsule of food,” he says of the Spanish, Chinese and American influences in Filipino cuisine. “Those are three of the most distinct food cultures ever – and they couldn’t be more different. And then they put their ingredients in the hands of people who didn’t grow up with them, and left.”

Interjects Petate: “So we did what we wanted with them.”

“And I think that’s so cool. It’s the original fusion food.”

But unlike other modern couples, when they couldn’t find a place downtown serving what they wanted to eat, they decided to quit their jobs and start one themselves.

Under a company name inspired by Petate’s dad, they hit the food fest circuit, with the self-taught Petate managing the flat-top and the fryer. This spring they moved on up to a spot in Kensington Market’s 214 Augusta food court. “Kensington Market has got to be the best place in the city for people who want to wander around and try something new,” McFarlane says.

“We regularly have people walking up and going, ‘Nope, never tried Filipino food before. Gimme whatever people like.’ Those are our favourite.”

And, of course, there are the people who grew up snacking on lumpia and ube sweets.

“The young kids bring their friends, and they’re all excited and the older folks are like” – Petate assumes a skeptical, unimpressed face – ‘Okay, if it’s good I’ll come back.'”

“They’re super-harsh,” McFarlane adds. “And then they come back with their lady friends, and you’re like, ‘We must have been good!'”

Along with a decidedly Toronto-millennial focus on local ingredients, Petate’s added a few Caribbean touches. “A big part of Tristen’s family is Caribbean, so we felt that was a really easy entrance point for people into a cuisine that’s very similar,” McFarlane says. “We’re just using the things about them that are the same to make people comfortable eating what’s essentially Filipino food.”

Take their biggest savoury seller, the tocino sliders ($7). Petate’s version of the ubiquitous Filipino sweetened bacon dish uses Sanagan’s pork shoulder (in lieu of the traditional pork belly) marinated in pineapple and soy sauce, then piled on a sweet Caribbean tennis roll. There’s also a jerk chicken version of their lumpia ($5), cigarette-sized spring rolls, which Petate rolls one by one.

But the rest is straight-up Filipino: gingery-sweet longanisa sausage available as little bite-sized balls on skewers ($2 each), “Shanghai lumpia” stuffed with Chinese-style pork, sliders with deep-fried Spam ($7), and the turon sundaes ($7) that account for most of their summertime traffic.

“The response to the dessert part of our menu was as unexpected as it was explosive,” McFarlane says.

Magnolia brand ice cream imported from the Philippines – in flavours like ube (purple yam), corn and cheese (tastes way more like vanilla than it sounds) and buko salad (young coconut with multicoloured candied fruit) – gets loaded up with mango condensed milk, a crunchy ube cookie, plantain chips and fresh-fried ube and plantain lumpia (a.k.a. turon) that Petate suggests using like a spoon to scoop up your sundae.

The ice cream’s been such a hit that when the duo open their future permanent location, they’d like to have a whole separate counter dedicated to desserts, Sweet Jesus-style.

First, though, they’ve got a wedding to plan.