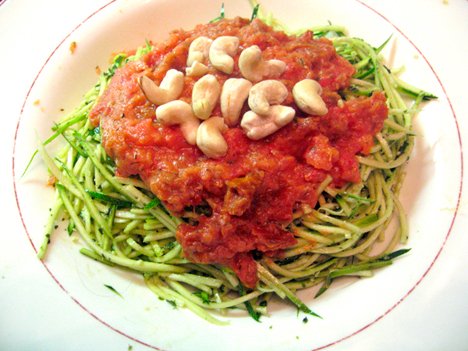 While most of you lot were binging on cheap nasty canapés and noxious egg nog, I was already undergoing the raw vegan detox that most don’t even consider until well after New Year’s Eve. You can read about my cleansing here.

It might just seem like fancy salad at first, but most of the dishes allowed by the diet, though often surprisingly tasty, are extremely time-consuming to make. Though I doubt I’ll ever have the urge for a wrap made from a raw collard green leaf stuffed with mashed avocado and alfalfa sprouts for a decade or so, one of them – a raw interpretation of spaghetti with marinara sauce – has made it into my permanent rotation.

Not only is it fairly easy to make, you can freeze most of it and always have it on hand to make an extremely nutritious and toxin-eliminating meal. And you can eat it by the bucketful!

I’ve had something similar in restaurants before. In the Annex, Live Organic Food Bar’s raw lasagna comes close and Rawlicious out in the Junction does a version of this raw food classic.

As does Hollywood raw chef-to-the-celebs Juliano Brotman is his Uncook Book. My interpretation’s based on the recipe found in Natasha Kyssa’s Simply Raw Living Foods Detox Manual but eliminates most of the salt. And the gratuitous dates.

I bunch of basil, rinsed, stemmed and roughly chopped

Combine in a blender or food processor and pulse until smooth. Presto: pesto!

½ tsp each dried oregano, thyme and crushed black peppercorn, to taste (use a combination of fresh herbs if available)

Combine in a blender or food processor and pulse until smooth. Adjust seasoning.

Using a Japanese mandolin or spiral cutter – you can find these at Sanko on Queen and Tap Phong on Spadina – cut zucchini lengthwise into long ribbons of “spaghetti”.

Place pasta in a large bowl and toss with pesto. Plate and top with tomato sauce. Garnish with red pepper flakes and a handful of raw cashews. Serves four.

Pesto and sauce can be frozen in separate serving-size containers for later use. Just slice ‘n’ dice your zucchini and you’ve got instant detox.[rssbreak]