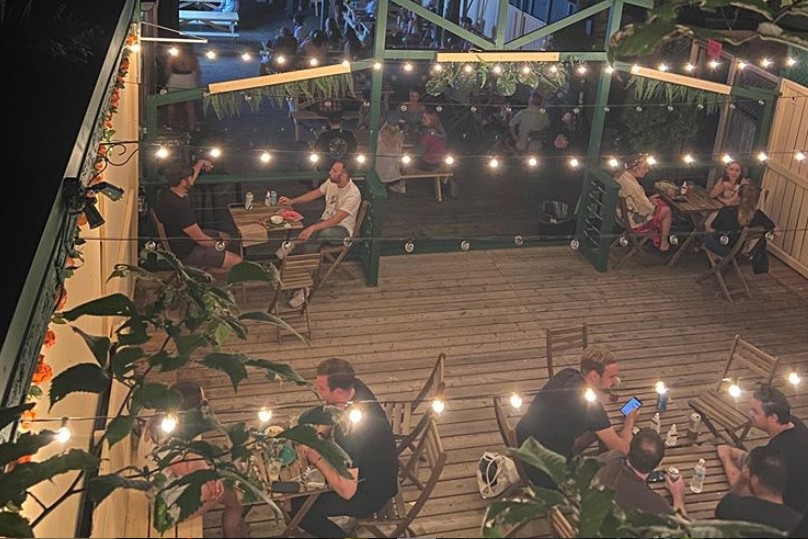 On August 5, the Caddi opened in the back of shuttered Parkdale institution Cadillac Lounge. Just shy of two months later, on September 26, the bar had its final service.

With a spruced-up patio, the Caddi became a new stomping ground for neighbourhood residents to grab some BBQ, order classic cocktails and cold beers while watching live performances or a catching a Raptors game.

In an Instagram post announcing the last day, the team said: “Our goal was to have a temporary haven of normalcy where we could get together and forget about these strange times we find ourselves in. Seeing so many people enjoying themselves in what we created means we achieved what we set out to do.”

The 100-capacity patio made it a great option for a socially distanced night out during the dog days of summer. The Caddi had a rotating list of chef pop-ups from BB’s Diner, Flora’s Deli, Boracay, Campechano and Good Hombres.

They were serving up easy handheld bites like barbecued short ribs, jumbo shrimp, tacos and burgers to cut down on the need for cutlery.

Pete’s Corner Grill, another Parkdale restaurant is also closing after 10 years in business. The neighbourhood mainstay is known for serving diner classics at affordable prices. Low-income and elderly residents in the area frequent it often.

According to a post in the Parkdale Community Updates Facebook page, the landlord sold the building without telling the family. An employee confirmed to NOW that the new landlord has given them a month to leave the space. They hope to open up in a new location in the future.

As the temperature dips, outdoor dining ventures that popped up throughout the city this summer are finding it difficult to sustain their business.

Further east, Taco Beach, the taco pop-up that opened in the old Ossington Tire space is closing temporarily. They are trying to move to an indoor dining space to keep business going through the winter months. Stay tuned to their Instagram for updates.