East End Cycling across the Bloor. 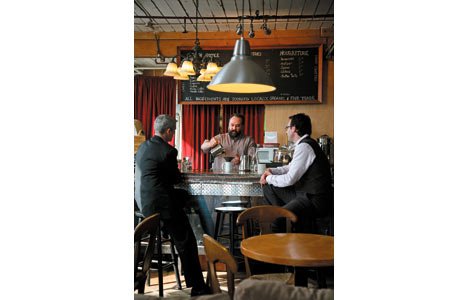 Cycling across the Bloor viaduct toward the newly launched Rooster (479 Broadview), I’m expecting a clientele consisting of two nannies and a Labrador retriever. Instead, I stumble upon one of the most percolating scenes around. And that’s not just the coffee talking.

“Everyone thinks Riverdale is all Globe and Mail readers and CBC listeners,” says Rooster co-owner Shawn Andrews, pointing to the nearly 20 customers who occupy every seat in the house. “We’re not. We’re writers and musicians and artists, self-employed people who just want to get out of the house but don’t have anywhere to go.”

Across town, west-siders swear by the Green Beanery’s (565 Bloor West) organic custom roasts. But this side of the DVP, true caffeine fiends get their fix at Merchants of Green Coffee (2 Matilda), an out-of-the-way warehouse known for its sustainable, small-farm, fair trade and certified green beans.

They also make a beeline for Mercury Espresso (915 Queen East) over in Leslieville. A Jet Fuel (519 Parliament)for the recently gentrified, the gritty four-year-old has just undergone a major remodel. Is Mercury moving upmarket?

“Our focus has always been the coffee, but we’ve totally revamped the space,” says co-owner Matthew Taylor, noting new hardwood floors and couches. “It’s all the same, only a little more comfortable.” 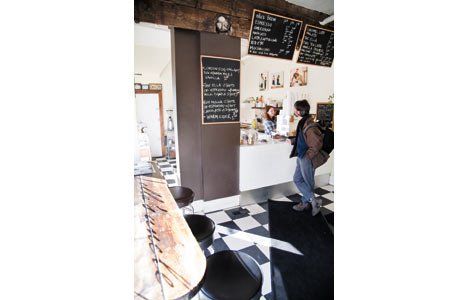 As with all generalizations, there are exceptions, blink-and-you’ll-miss-’em joints like Sam James Coffee Bar (297 Harbord). An espresso-puller of considerable note – NOW named him best in town back in 08 – the debonair barista worked his way through Cherry Bomb (79 Roncesvalles), Manic (426 College) and Hanks (9 Church) before launching his own spot last year.

“We get a lot of restaurant people,” says James. “There’s nothing else around here like us.”

There’s certainly no other Sonic (60 Cecil). Located in a historic coach house across from Grossman’s, this claustrophobic canteen brews up fair trade beans besides a short card of grilled cheese sandwiches and Wanda’s pies. The bike-friendly boîte also has a one-of-a-kind service.

“We offer quick bicycle repairs on the patio,” says Sonic honcho Anthony Darcy. “You grab an espresso on the way to work and fix a slow leak at the same time.”