Need to keep it hush-hush

I’m a straight guy, married to a straight woman for 15 years. Several years back, I opened up to my wife about my fantasies of her sleeping with other men. I was nervous about bringing it up. Her views on sex had always been traditional and she had always expressed a very strict idea of monogamy and commitment. So, I was extremely relieved when her reaction was intrigue rather than disgust. She was curious about it and wondered if I really wanted it to happen or if it was just something I wanted to keep in our rotation of dirty talk. Fast-forward to this week, and my wife tells me she is interested in exploring this. (Note to other guys who want this from their wives: be respectful, don’t pressure, and give her time to think about it. Your patience might be rewarded!)

Here is the problem: We both have careers that could be complicated or damaged by the stigma around “cheating.” I know about all the apps out there, but we live in a large city, and there is a non-zero chance that we might run into someone on the apps we are connected to professionally or socially. Are any of the apps out there geared toward folks who want to go about this carefully? Is it possible to minimize the risk of professional or social embarrassment here, or is this just something we must accept to pursue this lifestyle?
Hooking Up, Seeking Help

There are lots of dating apps for people and/or couples looking for casual sex and/or kinky sex (Feeld, 3Somer, #Open, et al), and lots of people – single and partnered – looking for casual and/or kinky sex on regular dating apps (Tinder, OKCupid, Christian Mingle, et al.). But hookup/threesome/swinger apps, while perceived as sleazier, are a safer bet for a couple like you and your wife.

While there’s no way to eliminate your risk of being recognized on an app, HUSH, anyone who spots you on Feeld looking for extracurricular dick was on Feeld looking for and/or offering up a little extracurricular dick of their own. The threat of mutually assured destruction – if they gossip about you, you’ll gossip about them – is usually enough to restrain bad actors, as is the threat of the obvious follow-up question. (“Wait, why are you on Feeld?”) And most people on hookup apps aren’t bad actors, HUSH, but fundamentally decent people like you and your wife, i.e., singles and couples looking for a little fun, not for an opportunity to hurt anyone. A friend or a relative or a coworker who spots your wife in a bar with a strange man – or in the lobby of a hotel or on her way into your apartment – is more likely to cause you headaches than one of your fellow perverts online.

To minimize your risk of being spotted and outed on the apps, HUSH, don’t post face pics and only share them after you’ve established – to the best of your ability – the person you’re talking to isn’t a bot, a pic collector or an extortionist. Again, there’s no way to fully eliminate the risk, but at a certain point you have to trust your gut and take a risk. You also have the option of creating a profile in a city you visit regularly but don’t live in, HUSH. After you’ve found and vetted a few good candidates, get yourself some airline tickets and a hotel room and have those drinks in a bar that a colleague, a fan or your father-in-law is unlikely to walk into.

There’s a story making the rounds on Reddit about people getting those metallic “bejewelled butt plugs” all the way into their asses and needing pretty intense intervention to get them out, ranging from partners pulling them out with their fingers (the unfun kind of double penetration) to actual surgery in a hospital (only fun for a very select few). The blame, apparently, is the fact that the base of these toys is rarely wider than the widest part of the head, which is pretty damning, and that lubed metal is slipperier than lubed silicone. So here are the operative questions: Are metallic bejewelled butt plugs safe or not so much? Are silicone bejewelled butt plugs any safer? Are there any safe bejewelled butt plug options out there? The world isn’t going to stop being obsessed with sparkly butt toys any time soon, so we’re going to need to find a way to do it safely.
Insertion Toy Extraction Messy Situation

I’ve seen those jewelled butt plugs in shops and in photos online – they’re usually made from stainless steel and have glass “gems” mounted at the end of an alarmingly narrow base – but I’ve never actually seen one in person. Or in a person, at least not in person. But knowing what I do about butts (and how they relax after some play), and knowing what I do about plugs (a flared base is your first line of defence against a trip to the ER), I would’ve worried too much about losing one to use one. As for safe bejewelled butt plug options, ITEMS, you’re going to want a flared base and a jewel that’s at least the size of Cullinan I Diamond, the fist-sized rock on the Queen of England’s royal sceptre, which, come to think of it….

Everyone needs to speak up

As you’ve surely heard, the conservative Supreme Court majority plans to overturn Roe v. Wade. While my wife and I were lamenting the state of this fucking country, she mentioned that nobody ever hears men talking about the abortions that kept their lives on track – even though that’s obviously a very common thing that happens. How many guys shat their pants after a condom failed during sex with a woman they weren’t that into? How many prominent men knocked up their mistresses or assistants or babysitters? How many Republican boys have pressed a wad of their parents’ money into a girl’s hand because having a baby would ruin his future? These men need to speak up. I’m not expecting actual Republicans to do so, but perhaps there are men out there who are willing to speak up and admit what we all know: Men benefit from abortion while bearing none of the shame associated with it. It’s time we heard from them. I’m sorry I don’t have a catchy name for this or a cute sign-off. I’m so tired and the world is falling apart.
Men Should Speak Up About Abortion

Now for some real worries.

We are weeks away from American women being stripped of a fundamental constitutional and human right. And we face the prospect of an out-of-control and illegimate Supreme Court stripping us of a host of other rights: the right to contraception, the right to same-sex marriage, the right to interracial marriage, even the right to have sex for pleasure – you know, the sex most people have most of the time. (In Lawrence v. Texas (2003), the Supreme Court struck down sodomy laws that criminalized not just consensual gay sex, but consensual sex between men and women that wasn’t open to conception as well.)

While it should be enough to hear from women who’ve benefited from safe and legal abortion – and it should be enough to know that women die from unsafe and illegal abortions, and enough to know that banning abortions doesn’t stop women from getting abortions – I happen to agree that cis men who support abortion rights and have benefited from them need to speak the fuck up about reproductive freedom.

“There are millions of men whose lives would have been worse without abortion,” the writer Jill Filipovic wrote on Twitter last week. “Men who wouldn’t have found their big loves, wouldn’t have their kids, wouldn’t have been as successful, wouldn’t have taken big risks” if they had become fathers before they were ready. To those men, to all men, Filipovic says, “This is your fight, too. Get in it.”

And gay men? The exact same arguments being used right now to strip women of the right to decide when and whether they want to bear a child – abortion isn’t within the “history and traditions” of the United States, abortion isn’t a right enumerated in the Constitution, abortion is a moral question – can and will be used to strip us of the right to have sex and the right to marry. Republican assholes are passing laws in red states right fucking now that force women to give birth to their rapists’ babies against their will. Don’t for a second think these same assholes won’t pass laws forcibly ending your gay marriage or throwing your gay ass in jail for getting your gay ass fucked. This is our fight, too, faggots.

Is there a website where we can legally find out how to buy the abortion pills you’ve mentioned on the podcast?
Make It Stop

Everything you need to know about abortion pills – how they work and where to get them – can be found at www.plancpills.org. And anyone using those pills at home needs to read Dr. Jen Gunter’s essay “Your Medical Team Cannot Tell If You Had a Self-Administered Abortion” at www.vajenda.substack.com. And everyone should read Jill Filipovic’s advice on what we can do right now to fight back (“Get To Work, Get Informed, Get Brave”) at www.jill.substack.com. And if you can afford to donate to the National Network of Abortion Funds, now would be a great time to do so. They’re at www.abortionfunds.org. And finally: don’t vote Republican, don’t fuck Republicans. 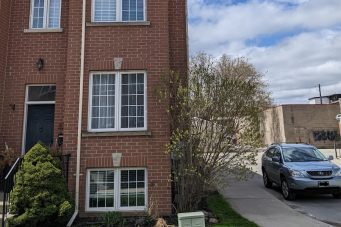 A sidewalk, grass and parking space is listed for $829,000 in Toronto

The listing at 24 Brick is selling a development opportunity as Toronto real estate prices dip following a mortgage rate.