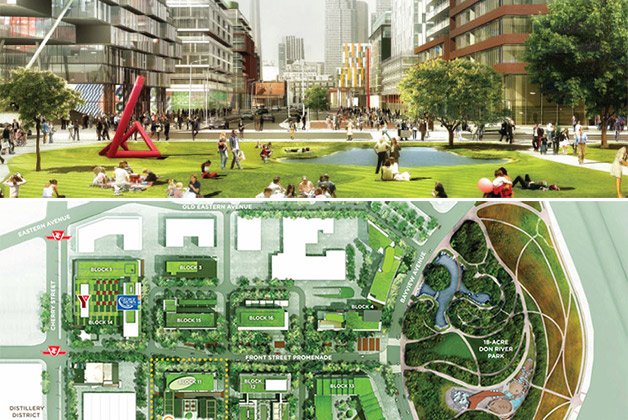 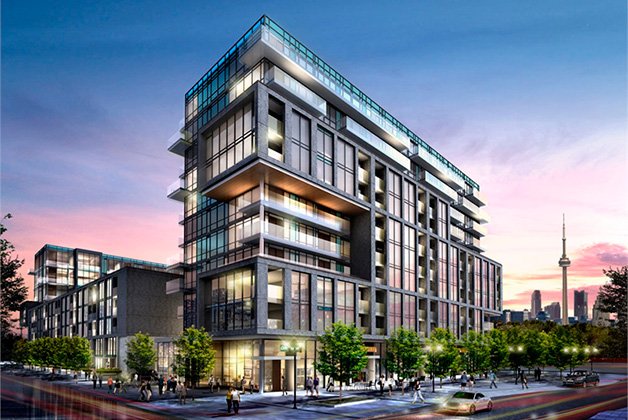 People are living closer together than ever but seem farther apart. In developers’ rush to capitalize on the condo boom, aided in part by the city’s lack of urban planning oversight, the idea of community has been put on the back burner.

The result is scores of would-be neighbourhoods with no sense of camaraderie, where everyone rushes in and out of their little spaces as quickly as possible, eyes glued to the ground.

Condo culture is here to stay, but there’s a sense that something is missing: the magic of getting to know your neighbours, the feeling of being truly at home in your home. These days, condo residents are looking for more than just four fancy walls and a roof over their heads.

In response, a new crop of developers is determined to build Toronto’s neighbourhoods of tomorrow. Where marketing materials used to trumpet luxury amenities and prime real estate, they now increasingly use phrases like “urban village” and “community.”

One such example is the Canary Park Condominiums’ Canary District in the east end. Located at Front and Cherry, Canary envisions the development as an actual community.

Opening in 2015, the first phase consists of four buildings all designed by different architects but physically connected. Krystal Koo, Canary’s vivacious marketing director, bubbles with excitement about the project. You get the feeling she truly believes in what she’s promoting.

“We made them work together by designing paths within the buildings so that you can cut through them and interact,” says Koo. “You can start at the park, Corktown Commons, and walk all the way through the buildings to the Distillery.”

Walkability is key to Canary’s outdoor spaces. The buildings sit back from the street to create a promenade the width of Spadina. There are just two lanes of auto traffic – the rest is pedestrian space.

“We wanted to have a walkable neighbourhood rather than just rows of monstrous towers,” says Koo. “You’re going to want to come outside here.”

Canary’s approach to street-level retail is also unique. Rather than simply throwing in the typical everyday necessities like nail salons and dry cleaners, the developers approached Live Learn Work Play, a company dedicated to mixed-use neighbourhoods.

The neighbourhood is also home to a new YMCA, which will develop its programming based on residents’ feedback. “It will be the heart of the Canary District,” says Koo. “Rather than having amenities tucked away in buildings, we wanted to create space where people can gather.”

Another huge incentive for residents to leave their condos? The entire neighbourhood will have free wireless internet.

Perhaps most importantly, Canary District doesn’t aim to be an island unto itself. Residents from surrounding areas are encouraged to drop in and take advantage of the community centre, parks, paths and local shops.

“It’s not like Liberty Village, where there’s not a lot mandated in terms of what can be built,” says Koo. “Here, everything’s mandated. You can’t go over a certain number of stories. There will always be open space.”

Elsewhere, developers and condo boards are turning to technology to better connect their residents. Over 250 Toronto buildings are using Bazinga!, web-based software that gives condo residents access to vital building information and the ability to easily book amenities, meet up for socials or even borrow a cup of sugar.

“Bazinga! was designed to help enrich the way people live,” says Bazinga! director of marketing Larissa Dundon. “We found that people living in a community are often like-minded and have shared interests. We’ve seen residents go on group outings, look out for one another and even set up tutoring lessons.”

Other condos are increasing the number of common-area spaces so that residents can get to know one another and host friends.

“Units are getting smaller and smaller, and we’ve probably hit that point where they can’t get any smaller,” says Ben Rogowski of Canderel Residential, developers of Aura at College Park, Yacht Club Toronto and the DNA condos.

“The condo lifestyle is moving toward a more European feel where people are spending more time outside their apartments,” he says. Canderel tries to dedicate more space than other developers to community spaces like dining rooms and terraces.

It all makes you feel that Toronto can grow into a world-class city that understands the importance of community. After all, a city is only as strong as its neighbourhoods.