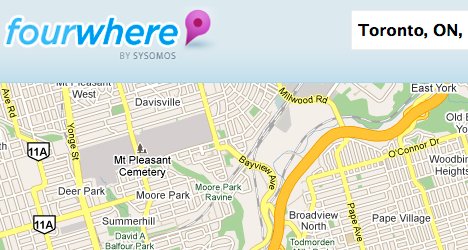 A Toronto-made, web-based application that is blend of already-successful Foursquare and emerging Gowalla networks and, most importantly, Google Maps.
In short, Fourwhere displays a Google Map which plots updates from Twitter and everything else wherever they may be in real time. This is great for festivals like TIFF or NXNE, and better for mass parties like Nuit Blanche. Case in point, the release of Fourwhere last week coincides, not by coincidence, with SXSW.
Sysomos, the creator, is a social media monitoring service born out of a U of T research project in 2005.
Starting with its unique service BlogScope, a search engine indexing nearly 100 million blogs, Sysomos has become a reliable measure of the importance of emerging technology, particularly since the rise of social media.
For instance, it wrote the book on Twitter (literally).
It got into creating applications, rather than just reporting on them, to organize the glut of information coming through social media.
“We always wanted to provide this free service. And Fourwhere is a free service because we recognize more and more people are using devices to share information. We providing a benefit to the public,” gushes Nick Koudas, CEO and Co-founder of Sysomos.
Fourwhere is basically Foursquare, the predominately mobile application Sysmosos obviously took its name from, but put through a Google-like search filter. Hence the TechCrunch headline: Foursquare + Google Maps = Fourwhere.
For anyone using Foursquare, that’s pretty useful. But for the rest of the world, broadcasting your location is like an invitation for a mugging. See pleaserobme.com.
Koudas disagrees.
“I definitely wouldn’t say that. All information is already public. If someone signs up to Foursquare, you will already be able see it,” he argues. “We make it easier to identitify, easy to discover, yes. But if you choose not to reveal anything publicly, then nobody can see it.”
According to Koudas, the project is simply “trying to make sense of user-generated content.”

User-generated content, of course, is becoming unruly. Every second, social media is digging itself further into a deluge of Tweets, updates, statuses. At least for some of that, there’s Fourwhere.[rssbreak]