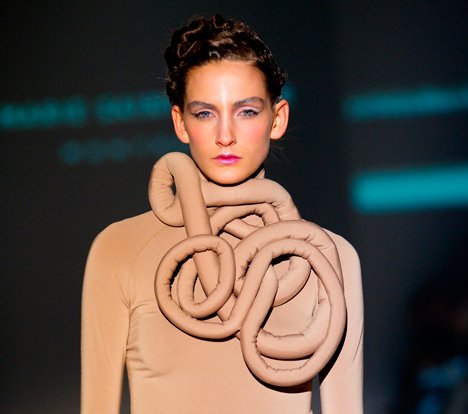 Above deck, a trio of Dubuc’s “urban sailors” in signature black were being filmed and photographed for the label’s Fall 2010 campaign. Below, editors put on hard hats to feel their way through samples hung from yellow cord in the boat’s engine room.

There were double-breasted, quilted vests in nylon and wool coats and suiting with stacks of seams on their cuffs modernly mimicking the braid trim on classic naval pea coats.

The first show at fashion week’s home in the Marché Bonsecours was Nadya Toto, an under-my-radar name who always surprises with a tight collection. Fall’s lineup had an eighties angle with its one-shoulder dresses and a palette of black, pink and grey accented with bits of lace.

Volume below the belt, in skirts textured with silk rosettes and pants that came to a point at their hips felt clunky but shoulder details on dresses, like loops of ribbon or a dusting of bugle beads, felt fresh. Sparkling cocktail looks in gold, silver and bronze made for a glam finale.

Later in the evening, the audience was torn over Marie Saint Pierre‘s presentation. Bubble coats that reminded me of the knit pieces in Jeremy Laing’s fall collection and light outerwear pieces with sharp lapels and beautifully topstitched seams were the strongest looks because of their confident simplicity.

Unfortunately, the majority of the collection was buried under belts and necklaces resembling twisted intestines. It wasn’t enough to make my stomach turn but they left a bad, gimmicky taste in my mouth.