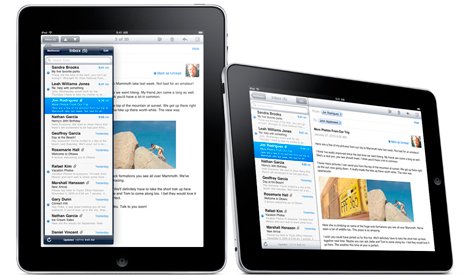 The iPad ties (Pad Thais?) together the iPod and the Macbook into one sleek, in-between-sized device, aiming to rid the persistent problems of the laptop and adding the functionality of the idevices.

It’s like a nano Macbook Air, or with its WiFi and optional 3G (but no phone), a bigger iPod Touch.

(This is from the Apple unveil on Wednesday, during which a turtleneck-clad Steve Jobs gave a brief demonstration. I haven’t come close to seeing an actual iPad.)

So what does it actually do, and what doesn’t it do?
The biggest plus, IMO, is it turns on like an iPhone or Touch. That is, like the slide of finger across a screen.
It has the ease of use of an iPhone, using the touch of the hand instead of the click of the mouse. It has the storage (well, if you pay for it) of a decent-sized hard drive (16GB-64GB).
Look at it like a computer, it’s the most portable ever – 0.5 inches thick, and 1.5 pounds. It’s purported to have 10-hours battery.
Look at it like iPhone or Touch, it’s got the most impressive screen to date, with a 9.7-inch display at 1024 x 768-pixel resolution.
Look at it like a Kindle, and it does everything an ebook reader should do, except without proprietary formats. And reading newspapers, which Steve Jobs dutifully demonstrated with the New York Times, looks like it was meant for the iPad.
But, like the diligent haters they are, bloggers are mostly focused on what it doesn’t have. Like:
This shouldn’t matter though. I find flash, for the most part, useless anyway. It slows my current Mac with its CPU-eating, and is mostly used for annoying ads. And it hasn’t stopped me from wasting hours on the iPhone, so I can’t see it being an issue here.
No GPS seems bewildering, but it’s not as if users will be walking the streets staring at an iPad. It’s portable, but not quite that portable.

The lack of camera, I predict, will be solved before it ships, or definitely by the second generation. It’s an odd omission as well, but non-essential for a laptop, so why hang on to it for a tablet?

The challenge of multitasking has been my biggest complaint about the iPhone, so I suppose there’s some credence to this one.
And lastly, the name. Well, I’ve read the theory that the gadget industry has been feminized, but this is a little over-the-top. iTampon was, for most of the release day, trending on Twitter. For such a forward-thinking company, could someone not have seen that one coming? It doesn’t look like it.
The iPad is reportedly arriving in Canada in March.[rssbreak]