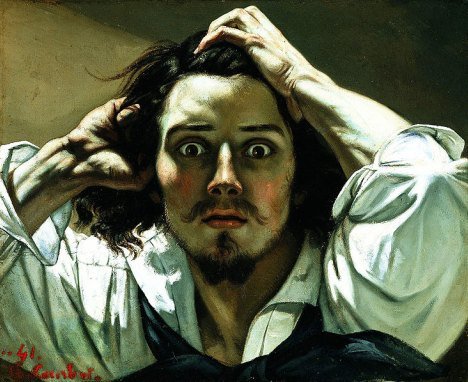 Gustave Courbet's Desperate Man just needs to get out there.

I am a 26-year old straight guy who hasn’t had sex for more than a year. Reading your column is really entertaining, but whatever problem people have, they always have a great sex life. Most of the questions are about the pros and cons of infidelity, dealing with threesomes, etc. But just the idea of having sex with someone arouses me, and I wish I could have some of the “problems” discussed in your column.

I’ve tried many things to break that year of boring chastity: online dating, going to clubs and talking to girls I know, all without success. I’ve considered hiring an escort, but I’m not really comfortable with the fact that I might get addicted to it and waste a lot of money. I’ve heard about swinging (not for singles), random encounters and sex chatrooms where you can meet people for so-called NSA. Craigslist is full of fakes, unfortunately, since it’s the kind of stuff I’d like to try. I’m running out of ideas and it bothers me – like, a lot.

My guess is that you could get laid but have certain personal standards that are impeding your prospects. Judging by my own experience and those of friends, Craigslist is not completely overrun by fakes, so it’s possible that you’ve been lured in by ads snuck onto these dating sites by professionals. Because they’re fucking cute, right? With their crop tops and belly piercings and tans, doing the sideways smooch with their BFFs. Yes, honey, those are hookers, not girls on a level playing field with you.

Try the ads with more realistic-looking women, open your mind to variety, avoid the ones that abuse the caps (translation: BANANAS) and you’ll have better luck.

And what does your ad look like? I could probably assist you with that, too. If you want to send some copy along, I’ll help you write one that’s a little more appealing.

What you’re asking is probably the most common question any sex columnist gets, and after so many years on the beat, I’ve got no definitive answer. I’m sure you’ve heard all the clichés: that you reek of desperation, that you’re trying too hard, that love will find you when you least expect it.

These are all vague truisms with an underlying implication about an “energy” you’re putting out. Okay, fine, if we’re going to conspire knowingly but abstractly to perpetuate these esoteric bits of wisdom, perhaps we should turn to a qualified mystic to elaborate on them a little.

Abigail McCullough is a master of intuition medicine. She can read energy off an email, so I sent her yours. Here’s what she said:

“It’s a little difficult when I can’t do direct consultation with his spirit. What I sense energetically from the email, though, is this: he has a big fear around sex that makes it inaccessible. I see him looking at it like a cookie jar on a shelf that’s out of reach, and I sense Mom’s energy interfering.

“It’s quite common for children to run to their mother’s energy around sex until they learn how to break the pattern. Sometimes we have embedded fears around sex and patterns of shame that are hard to release. If he wants the cookie, he needs to know it’s okay to take the jar down and enjoy the yummy cookie. He won’t get punished.”

So, Starved, here is your game plan, a little more fleshed out: dispense with the Norman Bates business, throw your calendar and your agenda away and just get out there.

A year ago I met a lovely young woman. After getting to know her for a while, she mentioned that she was trans. She was worried I would react negatively, but I didn’t. We were involved for close to a year, but she decided we should break things off, using the “it’s not you, it’s me” line.

I’m back into dating. The problem is that I’m having difficulty finding someone I like. As far as I know, every woman I’ve gone out with after my ex has been biologically female. So what I’m wondering is, should I give other trans women a chance? I’m just really confused. Can you help me figure this out?

Have disheartening experiences with biological women prevented you from dating them again? Probably not, and it looks like your first relationship with a transsexual woman ended as so many do.

The “it’s not you it’s me” speech can leave you feeling a little duped, a little groundless, and sometimes it feels like an insultingly benevolent fiction, but turn it over and look at it another way and you’ll see there is some real truth to it. Her feelings have changed, yours haven’t. So, yeah, it really is her and not you. Sure, it still kinda sucks the wienie, but anyone could have said this to you, and I’m sure some have, regardless of biological sex.

Swearing off a “type” is something we do to protect ourselves from hurt. Falling in love with someone – especially someone who expands our vision of ourselves and our desires – and losing them can bring up a lot of old fear, which for many of us manifests as anger.

It can feel easier, more reliable, to sit in anger rather than heartbreak but in the long run, this makes it harder to acknowledge that we can get past it and trust again.

Let the heartbreak run its course, be gentle with yourself and keep a broad mind. Consider yourself a lucky man: there’s a whole other segment of the female population you’re open to dating.

Got a question? Ask Sasha. sasha@nowtoronto.com.[rssbreak]