Every time Fashion Week comes around, people ask me whose collections I most look forward to seeing. For me, it's. 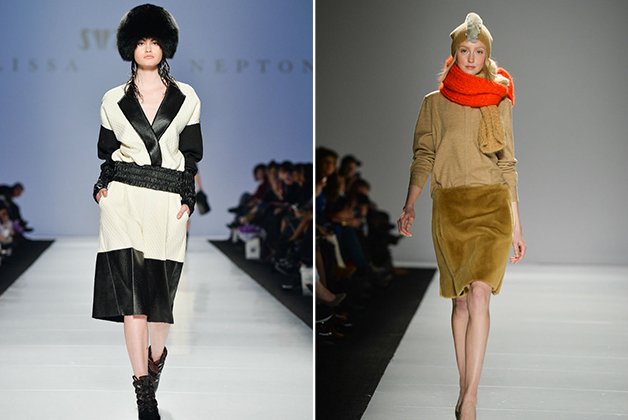 Every time Fashion Week comes around, people ask me whose collections I most look forward to seeing. For me, it’s never the powerhouse designers that have been around for years, it’s the newbies.

Rookie designers are still experimenting and haven’t yet hit the point in their careers where the constant struggle to drum up retail support has dulled their creative senses.

It’s also fascinating to see a designer grow, to discover who their woman or man (or both) is. Whether their first few collections are good, bad or somewhere in between, a new name splashed across the runway’s backdrop presents the possibility for potential that I find thrilling.

So, apart from my issues with the sponsorship component of Mercedes-Benz Start Up (the automotive giant ranks 16th on Forbes list of the world’s most valuable brands, but can’t seem to offer designers a cash prize), I was eager to see recent winners Matiere Noire’s and Malorie Urbanovitch’s fall 2014 collections.

Despite the decision to greet guests with what was described by some as “murderous” ear-damaging music, Montreal-based Matiere Noire (French for “dark matter”) had a relatively strong showing. Gothic, seemingly Illuminati-inspired looks came down the runway paired with twisted cylindrical pigtails and black chokers that reminded me of Wednesday Addams. Punked up versions of Kenzo wrap skirts with big leather straps and shirts and dresses featuring applique moons were highlights of the line. At the right price point, these could definitely sell.

Malorie Urbanovitch followed with a trendy 90s schoolgirl-inspired collection. Private school-style skirts, brushed alpaca coats adorned with jumbo safety pins and ribbed knits were all very “the girls from Clueless grow up and become librarians.” There were some strong pieces, but the styling was way too conservative. The collection also reminded me quite a bit of Lacerda’s fall 2013 collection, which was actually inspired by Clueless.

At the end of the shows, Mercedes-Benz announced they are starting “phase two” of the competition. For a moment, I thought this might mean upping the ante with more valuable prizes, but no such luck. It only meant that they’ve signed another three-year contract to run the competition.

The best show of the evening belonged to Melissa Nepton, the queen of jumpsuits. The show was a game of “is it or isn’t it?” as guests tried to determine whether what appeared to be long flowing gowns and voluminous skirts were actually artfully concealed wide-leg shorts or pants.

Shades of cream, light grey and pastel pink contributed to the collection’s sporty, but feminine feel. Cool cyber-age geometric prints, both big and small, mixed with just about every texture in the book. Fur, leather, knit – Nepton experimented with them all, often on the same garment. What might have been downright ridiculous in the hands of a less skilled designer was a visual playground on Nepton’s runway.

Day three at the tents saw the infamous Joe Fresh/Pink Tartan combo take centre stage. I was happy to see Kimberley Newport-Mimran present her line with a little more showmanship than usual. Touches like a quilted black jacket that resembled a giant duvet and quirky sunglasses kept things interesting in what would’ve otherwise been just another sea of sporty separates. Standout pieces included a pant-shirt combo in a vibrant red houndstooth print and an ultra-modern black jacket with a high fold-over neck.

Joe Fresh followed with what was essentially a cheaper looking version of Pink Tartan’s collection. Instead of fur, Joe Mimran and team used something euphemistically referred to as “teddy” material. Apparently Mimran was inspired by Canada, but it looked more like he’d raided a Build-A-Bear workshop.

The hats were the worst. Models donned knit toques with a skunk-like stripe of faux fur down the centre. At the end of the show, a man in the front row, for unknown reasons, decided to serenade Joe Mimran with a gold-trimmed vuvuzela. It was weird, but still not weirder than those hideous hats.

The best part of day three was the Toronto Fashion Incubator’s (TFI) press and buyers brunch. It was an intimate gathering where you could spend some actual face time getting to know Canadian designers and their lines. Deputy Mayor Norm Kelly even gave a keynote speech, saying he’s “in awe of the industry” and that he believes Toronto’s creative fields will be key to the city’s economic growth this century.

Some labels that caught my eye included local womenswear brand Blak.I (I own a couple of their pieces and they fit like a dream), Toronto’s own Tuck Shop Trading Co., which plans to capitalize on their successful City of Neighbourhoods toques with an array of new styles for fall coupled with an extension into the U.S., and SS&Co’s colourful chunky knits.

Local jewellery brand Sappho moved everyone with its mission to empower women through design. They hire marginalized Toronto women to craft their intricate pieces and provide them with training, work experience and a living wage ($18 per hour). The company also donates a percentage of its proceeds to various charities.