The legality of public erotica, and defriending exes on Facebook 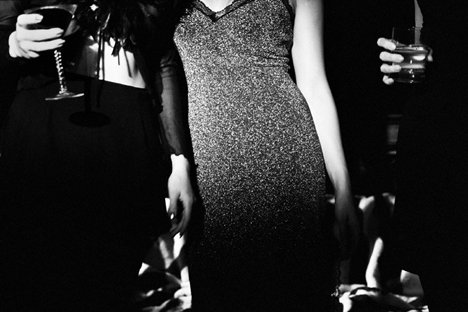 HOW FAR IS TOO FAR IN A BAR OR PUBLIC SPACE?

I’m helping a friend launch an erotica reading/cabaret night. The bulk of the night features writers/performers/content we select ourselves and a small part of the evening will be open-mic format.

We are debating whether or not we should have a submission policy around the type of content we would allow in the performances. I don’t like the idea of setting up restrictions, as I feel like the whole idea of an event like this is for performers (and the audience) to freely explore ideas around sex, even if it means pushing boundaries. At the same time, I don’t know if I feel comfortable having someone do a piece that borders on child pornography or bestiality. How does one determine the lines of what can and can’t be shared? Are there legal issues around what you can and can’t say/read during a public performance in a bar, or can people say whatever the fuck they want as long as people are given some sort of warning?

“Our Criminal Code, which is applicable in all provinces, contains numerous provisions that could apply to a public performance,” says Toronto criminal lawyer Alexander Ejsmont. As that pertains to pederastic content, “The Code’s definition of child pornography includes any written material [his italics] or visual representation that advocates or counsels sexual activity with a person under 18.”

Until fairly recently, our Criminal Code had a provision that took into account “artistic merit” but in 2004, a bill (C-2) was passed that changed this more liberal terminology to “legitimate purpose.” The Evolution of Pornography Law in Canada states, “Section 163.1(6) of the Criminal Code now requires that the accused satisfy an objective, two-step harms-based test: No person shall be convicted of an offence under this section if the act that is alleged to constitute an offence has a legitimate purpose related to the administration of justice or to science, medicine, education or art and does not pose an undue risk of harm to persons under the age of eighteen years.”

“In public performance cases, note that there is also a section criminalizing an ‘immoral theatrical performance’ which places liability on both on- and offstage players,” says Ejsmont. You can look up Section 167(1) of our criminal code for more details on that.

You may be thinking, “Why is it legal to have sex with a 16 or 17 year old, but if you do spoken word about it, you’d better be prepared to defend it as being legitimately artistic?”

I have no idea, and what a hopeless standard by which to judge erotica, anyway. I mean, good lord, sex makes most of us just daffy – an incalculable percentage of the art we create about it in a state of untethered lust, regardless of age or species, is bound to be objectionable by someone’s measure.

As for bestiality, we only have laws that make it illegal to commit the actual act or coerce someone else into the act. But let’s assume that, given our obscenity laws (which are vague on the issue at best), a cabaret piece that deals with zoophilia could constitute an immoral theatrical performance.

Jason Gratl, a constitutional lawyer who volunteers for the British Columbia Civil Liberties Association, says, “Yes, there are limits on what a person can say in public that are independent of the consent of the listener: criminal code restrictions on hate speech, communicating for the purpose of prostitution, counselling the commission of criminal offences such as sexual assault, etc.

“There are also criminal code offences for which the consent of the listener is a factor to be considered in determining whether the content offends ‘community standards’ and is therefore illegal: indecent acts and indecent theatrical performances are two examples. Where there is consent, the Court is less likely to find indecency based on community standards.

“‘Community standards’ is the test for indecency, with the standards being assessed by a judge with reference to anticipated harm to the proper functioning of society, especially with reference to gender relations. For ‘indecency’ related crimes, the courts have backed off, requiring greater evidence of psychological or attitudinal harm to spectators and participants.” Gratl gives the sex club cases in Montreal as an example.

In short, AG, no, you can’t just say whatever the fuck you want and, although warning people about salty subject matter can’t hurt, it doesn’t necessarily mean the authorities are going to look the other way.

“If you’ve got any doubt about whether a specific act crosses the line,” says Gratl, “call a lawyer and get legal advice beforehand.”

After about 10 months, my boyfriend and I have decided to call it quits – mostly at his behest. Needless to say, it’s been painful and, though we’ve agreed (cautiously) to be friends, there are a number of things making this transition difficult for me, a glaring one being – I’m afraid to say – Facebook.

I am both eager and reluctant to unfriend him. Eager because looking at his status updates, photos and wall posts has become an unhealthy obsession, and reluctant because in the world of being-friends-post-breakup it seems an unnecessarily harsh step.

I don’t really want to have the conversation with him because I’m not interested in continuing to gnaw at fresh wounds, but I also don’t want him to be confused by this sudden, “unfriendly” gesture. What should I do?

It is interesting how these online social networks have created, with our complicity, these new and unreasonable pressures on our personal lives. We have always socialized and loved publicly by declaring ourselves in relationships and creating contracts and rituals around them. But now, we have established these additional records (along with a new language and a wider ranging audience), and the next thing you know, you have a whole new set of concerns once you disengage.

Things like changing your relationship status and dealing with that fallout wondering if an ex is looking at your updates and making them amusing and vivacious in the hopes that you are being observed checking their new friendships and events scrutinizing photographs of people they’ve been tagged with worrying about the friends you have in common and those your ex made through you and whether your ex continues to socialize with them online and otherwise.

We invite these virtual networks into our intimate lives and suddenly the connections they create become very real and, occasionally, very distressing. That’s because we’ve compromised our right to grieve privately when one of them falls apart. And just to torture ourselves further, we continue putting on brave and upbeat faces on our own profiles. It’s exhausting.

Unless you are really into challenging the limits of your tolerance, it’s probably best not to be privy to the ongoing details of your ex’s life. Though they are made easily accessible to you (and are potentially being tailored dazzlingly for your benefit) it is unkind to yourself to snoop.

And while agreeing to be friends after a relationship ends is commendable, it also implies that you are ready to behave in a way befitting a friend. That is hard enough to do when you’re a big sloppy mess to begin with, never mind apoplectic over a photo of your former beloved at a party with some writhing chorus girl in his lap. To be friends with someone when you were recently lovers requires delicate footwork, and forcing yourself to learn it while you are feeling clumsier and rawer than ever is not always what’s best for you – or the potential friendship, for that matter.

In an earlier column I mentioned overshare being the 2008 Webster’s New World Dictionary Word of the Year. Guess what the New Oxford American Dictionary’s choice is for 2009’s Word of the Year? You got it, Facing: Unfriend.

Intellectually and culturally we have acknowledged how prevalent the conventions of these networks have become in our lives, but it doesn’t mean we’ve had time to catch up to them emotionally. We want to revel in our joys and accomplishments and these social networks allow us a place to do that but then we are stuck living out our disappointments and heartbreaks in equal measure.

Negotiating a friendship after a romantic relationship at your own speed and with your own limitations in mind is key – you are under no obligation to do this at a breakneck pace and with troubling boundaries. And while it may be gracious to offer some gentle forewarning when “removing a connection”, you are also free to do this on your own terms and without revealing your reasons. You are simply allowing yourself a little space and compassion so that you can heal.

I think he can understand that without having to get a personal status update from you. And if he doesn’t, well, you’ve broken up. You don’t need to run all your decisions by him if you don’t want to.

You may even consider a short break from Facebook altogether and get back to real time connections with your friends. You’ll need them through this difficult time.[rssbreak]