We mean, can you believe the nerve of fashion bloggers these days? 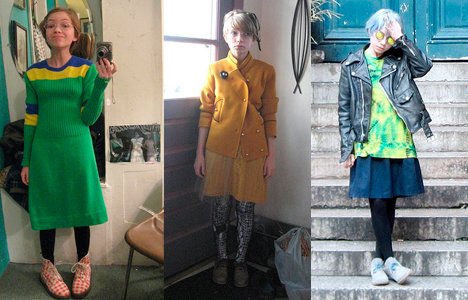 Not since Shirley Temple stole the silver screen from the grown up stars of 1930s Hollywood has a girl with a bow in her hair caused such a sensation. We’re talking Tavi of course, the 13-year-old style blogger who went from industry pet to front row sitting duck with one over-the-top wardrobe choice last week.

Enjoying her primo seat at Dior’s spring haute couture show in Paris, Ms. Gevinson had the nerve to top off her outfit with a giant pink bow gifted to her by British milliner Stephen Jones.

“So what?” is what you, I and Tavi herself are thinking. Better to be positioned behind a diminutive fashion phenom sporting a substantial though, for the most part, see-through fascinator than Lady Gaga at the Grammys.

Tavi’s age is irrelevant of course. She writes better than most of us and understands fashion in an entertaining and pop culture-savvy way that only someone who has never known being interested in clothing without the web can get it.

The moment was a tipping point or, rather, an excuse for established editors, writers and critics to vent their digital age insecurities. The latest angle of debate on the subject, questioning whether some bloggers are now as much on the swag-take from designer brands as the usual front row suspects, reads more like jealousy than concern for the industry’s shallow code of ethics.

But I’m not telling you anything you don’t already know. The blog-as-trend story’s slow burn burns slowest in the fashion pages. Unfortunately, declaring it over at this point would look just as silly as writing about it in the first place.[rssbreak]