Jay Baruchel is The Trotsky 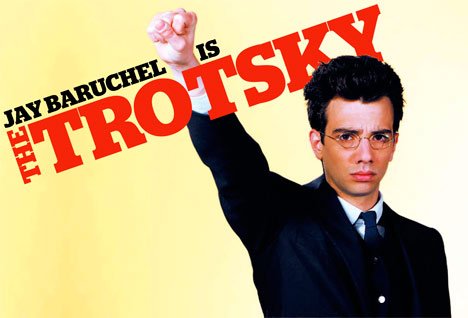 There was a time when Jay Baruchel and his former roommate Seth Rogen would flip channels and wonder when there’d be regular-looking people on TV – when synthetic heartthrobs would give way to average dorks like them.

It’s taken some time, but they’ve finally got their wish. Baruchel and Rogen, among others, are at the forefront of the “revenge of the nerds” movement, bringing normal back to the big screen in a big way.

With his noodly physique and a voice that sounds like a pubescent teen with sinus issues, Baruchel became the staple supporting player in comedies like Knocked Up and Tropic Thunder.

And now he’s taken his geek persona and graduated to marquee status, playing the insecure leading man in the romantic comedy She’s Out Of My League, voicing the sensitive hero in the animated hit How To Train Your Dragon and taking on the title role once played by Mickey Mouse in this summer’s The Sorcerer’s Apprentice.

Baruchel isn’t embarrassed to list the ways he resembles the socially dysfunctional characters he so often plays. He gets obsessed with odd facts, reads a ton and would rather stay home and play video games than go out.

“But I’m also far crazier than people realize,” Baruchel says from his home in Montreal. “I have an obsession with medieval weapons, and I always buy Soldier of Fortune magazine.” 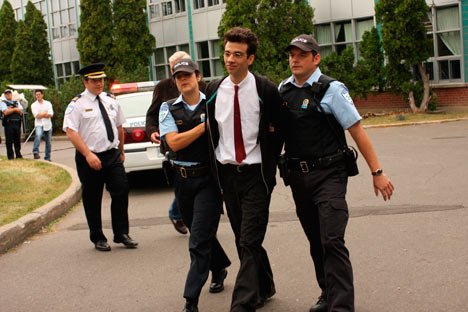 “Crazy” could also describe Baruchel’s character in The Trotsky. The Montreal-set film, written and directed by the star’s old neighbourhood buddy Jacob Tierney, premiered at TIFF last year and was selected as one of Canada’s Top Ten. Baruchel plays Leon Bronstein, a brilliant but unstable shit-disturber who believes he’s the reincarnation of Russian revolutionary Leon Trotsky. Leon mounts an adolescent revolution and resorts to extreme measures to unionize high school students against a “fascist” educational system.

Baruchel was drawn to the complex character’s profuse and intimidating knowledge. He also saw a little bit of his own big mouth and teenage tirades in Leon’s passionate outbursts – with one major exception.

These days, the actor’s pretty much a lefty like Leon, but it was a different story when he was younger. Being liberal was pretty typical at the fine arts high school Baruchel attended, where kids were openly bisexual and devout Marxist-Leninists.

“That was the surrounding I was rebelling against,” he says, laughing. “I was the one teenager in the history of teenagers to actually become a knee-jerk right-winger in high school. It was embarrassing. I was very pro death penalty. I was fucking Glenn Beck.”

Baruchel and Tierney have already reunited after The Trotsky for their second film together, Good Neighbours, and now the actor is awaiting production in Manitoba on a film he’s written called The Goon, about a bouncer who becomes a hockey enforcer. How Canadian.

“It’s going to be the hockey movie that hockey fans have been waiting for,” he says.

In the meantime, the actor reprises his nerd persona in this summer’s The Sorcerer’s Apprentice, a Harry Potter-meets-National Treasure blockbuster. Baruchel gushes that it was a geek’s wet dream to star in a Hollywood fantasia opposite renowned comic book aficionado Nicolas Cage.

“We had car chases and ancient monsters,” he oozes with fanboy enthusiasm. “I got to shoot plasma out of my hands. I got to fight bad guys alongside the star of Con Air! We geeked out together for six months over comic books, history, mythology and all sorts of weirdness. It was fucking sweet, man.” 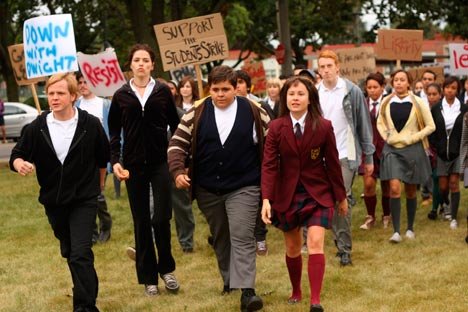 And while his own star keeps rising, Baruchel is pleased at the attention he’s bringing to Canadian movies like The Trotsky. An outspoken patriot, he consistently returns home to lend his name to local films.

In fact, he finds it appalling that most other Canadian celebrities don’t do the same (ahem… Michael Cera, where you at?) or that when they do it’s usually because they’ve failed to make a dent stateside.

“I think that’s a shitty lesson, a shitty moral and a shitty truth,” Baruchel fumes. “To tell Canadian kids that the only time Canadians want to be working here is when they can’t get work in the States, that’s fucked. I will always have a career in both countries as best I can.”

Still, Baruchel’s success didn’t come easy. The former Popular Mechanics For Kids star was on the cusp of “breaking out” for a decade, stuck in minor-role limbo since appearing as a maniacal Led Zeppelin fan in Cameron Crowe’s Almost Famous and then as a mentally handicapped teen in Clint Eastwood’s Million Dollar Baby.

He’s met his fair share of challenges along the way, but one obstacle has been particularly annoying.

“There’s nothing more frustrating than working your ass off to get a part and the only criticism of your audition is, ‘He’s great but too ethnic-looking.'”

Baruchel’s had to deal with his share of anti-Semitism, both within the industry and maybe even more online. 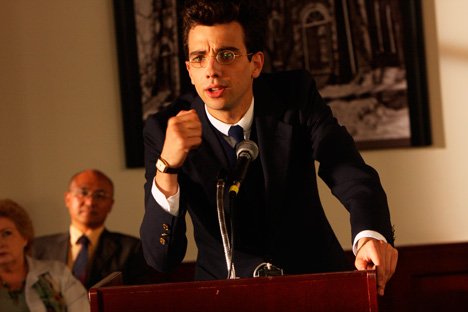 “The Internet is the last refuge of bigots,” he says with irritation. “Often when people shit on me, they mention something about my being Jewish.”

“It wasn’t for lack of trying,” he laughs.

The funny thing is, Baruchel is only a quarter Jewish, even though he’s often cast in Semitic roles. His background is also French and Irish-Catholic, but that doesn’t deflect the prejudice. He may be hard to identify ethnically, but that only means Baruchel also gets hit with derogatory comments about Latinos or Italians.

“I’m the pan-Mediterranean whipping boy,” he says, acknowledging that he’s proud of all his heritages.

The fact is, the idiosyncratic actor is difficult to pin down, as much as people may try. He’s constantly straddling the divide between Jewish and Catholic, nerd and psycho (his words, not mine), Hollywood and Canada.

He admits that in a lot of ways he’s “blessed” with the kind of perspective most actors can only dream of, just because he’s always been living many separate lives at the same time.

“I am all of them,” says Baruchel, in that trademark nasal voice, with cool satisfaction. “And none of them.”

The Trotsky’s Leon Bronstein isn’t the first cinematic student to buck authority and stand up to The Man – though he’s the only one on our list of rebellious students to stand up to Colm Feore. Take a look.

And: read a review of the film.