NOW MagazineMovies & TVNews & FeaturesToronto sex worker Andrea Werhun: “Whores are pretty relatable when it comes down to it”

Toronto sex worker Andrea Werhun: “Whores are pretty relatable when it comes down to it”

The former escort, author and star of the short film Modern Whore talks sex in the time of coronavirus, escort review culture and "the whore-archy" 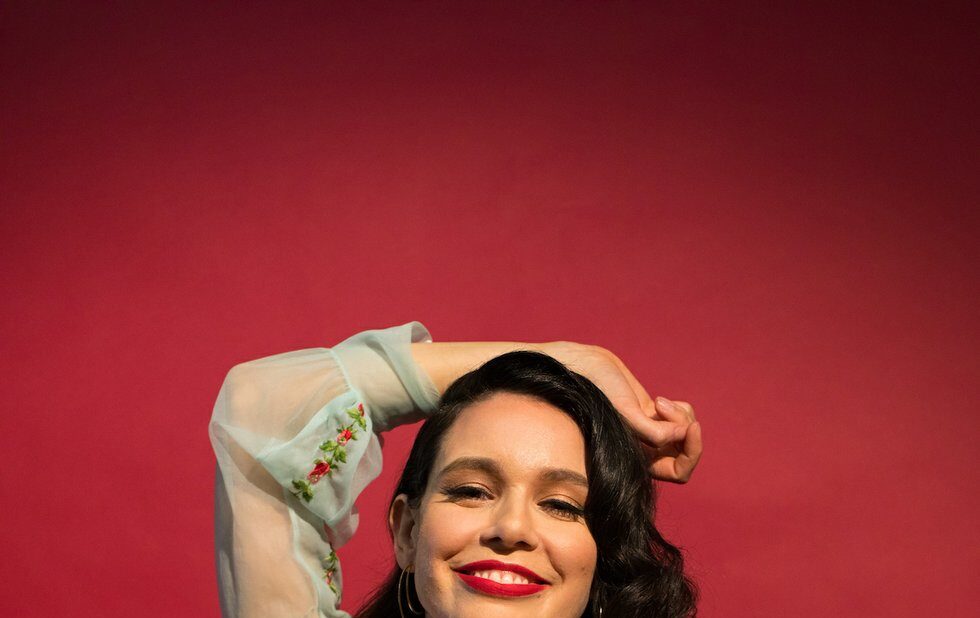 Andrea Werhun can be whoever you want her to be. That’s one takeaway from the Toronto-based former escort’s new short film Modern Whore, based on her memoir of the same name.

Director Nicole Bazuin’s provocative and hyper-stylized short recreates a handful of Werhun’s past encounters while alternating between looks: she’s a bohemian, a Douglas Sirk-style suburban housewife and an academic ready to debate pipelines.

The fantasy costumes are fitting. In just over 10 minutes, Modern Whore is not unlike chatting with Werhun: she’s cheeky and funny but also a serious and insightful critic who takes on the subculture of escort reviewers who post on websites that are like X-rated versions of Rotten Tomatoes. It’s a funny, celebratory and cautionary film.

My own encounters with Werhun also started off as funny and celebratory before becoming sombre. I first met Werhun to discuss her film’s world premiere at SXSW. Then, in the middle of our photoshoot, as news broke that SXSW was cancelled, I saw the colour drain from Werhun’s face.

COVID-19 was spreading to North America and the era of social distancing was about to kick in. The hits kept on coming. Werhun had to step away from her gigs as an exotic dancer as well as an outreach worker at Maggie’s Toronto Sex Workers Action Project, where she handed out supplies to sex workers.

As a COVID-19 information package provided by Maggie’s and Butterfly Asian and Migrant Sex Workers Support Network points out, most sex workers can’t access labour protections like sick leave and EI. The info pack outlines resources and guidelines on how escorts who feel they must continue working can do so during the COVID-19 pandemic. The guidelines cover everything from hygiene practices to best positions with limited face-to-face contact. The package also asks allies to not shame sex workers who must continue on the job and includes info on an emergency support fund the public can donate to.

“It’s a privilege to stop working,” says Werhun, who has observed many sex workers on the stroll despite safety concerns. She points out many are precariously housed and don’t have enough money to stockpile food.

Some sex workers have gone online, using subscriber-based services like OnlyFans to earn money. Werhun still has her film and the book, which is getting a second print run. Werhun has expanded Modern Whore to include her recent experience as an exotic dancer and is raising funds on Kickstarter to print the second edition.

In the meantime, SXSW has premiered Modern Whore online for a limited time. Watch the film here and read our conversation with Werhun about the short, the stigmas and stereotypes surrounding sex work, escort review culture and onscreen representation of sex workers.

I am very nervous about having this conversation.

I understand that sex makes people feel uncomfortable. The best way to think about sex work is as work – as a job. It helps takes some of the piss out of it as far as the things that make us afraid.

It’s not an industry as it is popularly portrayed – where every single person is a universal victim that has been human trafficked or forced into the industry and men should feel guilty about the way they engage with the industry or all of the women should feel like they’re not empowered and they haven’t chosen it, when perhaps they have.

I also find the conversation about sex work is changing now because it’s work. We live in a capitalist society. We all have to work to make a living. We all have to make choices when it comes to the money we make. We don’t all do things we like for money. Whores are pretty relatable people when it comes down to it. We all suck the proverbial dick at some point.

I can’t help wondering whether you have to tell yourself that in order to feel comfortable with what you do?

No. When I hang out with my coworkers, we all have a similar spirit: the fiery, fierce, fuck you pathos. We’re all outcasts. And we’re shamelessly fun. And we like making money while having fun. And we have each other. And we all understand each other in a way that people who have never sucked a dick for money don’t understand. It’s a pretty strong sense of community if you can find it.

The thing about sex work is it’s so isolating sometimes. It’s so hard to talk to people outside of the industry about it. That’s why it’s so important for sex workers to talk to each other about it.

When you say you’re all outcasts, are you saying you’re outcasts because of what you do or because of what brought you to this work to begin with? I understand that the latter notion plays into the stereotype that all sex workers come from a damaged home or something like that.

The work that we do makes us social outcasts by virtue of the stigma and the criminalization that we face. Canadian law puts prostitution into a legal grey area so that we can’t rely on law enforcement the way civilian women can, for instance. Of course, civilian women can barely rely on the cops as it is.

Sex work adds this extra layer of stigma. That does lend itself to feeling like an outcast. You can’t rely on the power structures that be to protect you. You have to rely on each other.

As far as feeling like an outcast in general, and finding a home in sex work, there’s some truth to that for some people. But there are such a wide variety of people that engage in the industry. People come from all sorts of backgrounds and every privilege level imaginable. Yes, a lot of us come to the work as outcasts, but a lot of us don’t. A lot of us are extremely privileged and capitalize on that privilege to make more money.

There is something within sex work that we call the whore-archy. You have the white, high-class escort at the top who has the most privilege. She’s all out in the open and charges $1,000 an hour. At the bottom of the hierarchy you have marginalized people of colour and Indigenous people people who are working on the street drug users people that don’t have any power whatsoever in our society.

The closer you get to the top, the more distance you are from the people at the bottom: “I’m not like that. What I do is nothing like what they do.” But at the end of the day, we’re all sucking dick for money.

You deal with escort review culture in the film. I see your job as a performer. You’re an actor. You’re performing a role when you do sex work. Do you see the reviews as a review of your performance as an actor? Or do you see those reviews as objectification? They can sound very dehumanizing, as if they are product reviews.

It is a very fine line between a performance review versus what feels like the most literal form of objectification. Somebody is publicly writing about what your body looks like and what it is like to have sex with you. It feels dehumanizing, but it’s complex because that objectification is essential to the careers of a lot of escorts.

That’s why a bad review can be so dangerous – it can destroy a sex worker’s career. She works very hard at building her reputation. A hobbyist can say: “I want you to do X and if you don’t I’m going to write a bad review.” That threat holds a lot of weight unfortunately in this [subculture] that still takes reviews seriously.

I’m in this privileged position where, as far as I know, most of the reviews that I got were positive. So I can be like, “Oh they’re not that harmful, they’re kind of validating.”

But what if they hadn’t been complementary? What if there had been serious implications to something that had been fabricated in a negative way? These guys aren’t writing to tell the truth about the experience. They’re writing for a particular audience and that audience is other men. They’re writing erotica for men. Escort review boards are places where men write essentially fan fiction.

You call these guys “hobbyists,” which is an interesting term.

I want to go back to the worst part of what you just said – they threaten bad reviews to get their way?

A sex worker is in a difficult position when she doesn’t want to get a bad review. It’s coercion. It’s a form of rape that doesn’t get acknowledged because of this weird legal grey area that sex work occupies in Canada. 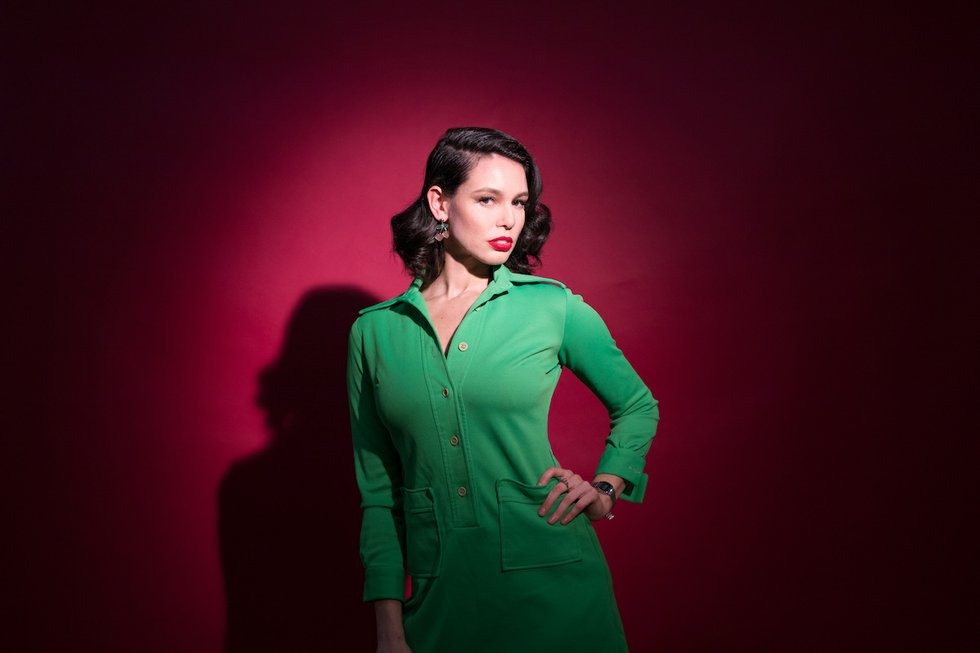 What are you trying to accomplish with Modern Whore, both the book and the film?

The overall mission of Modern Whore is to de-stigmatize sex work and make it relatable to civilians. It’s also to give sex workers visibility and representation, to make sex workers feel a little less alone, a little less isolated and a little less ashamed. There’s nothing wrong with pleasuring people for money. It’s a pretty good gig when everyone’s happy and safe and everything is consensual.

I want to see the decriminalization of sex work in my lifetime. That is my mission. I would like to do to that with my art. If my art can’t get us over the finish line, I’m going to lobby politicians to do it. And if the politicians aren’t doing anything, I’m going to become the politician. And I’m going to fucking see it happen because there is no reason why consensual sex work should be a criminal offence in this country.

Modern Whore is a rare film in that a sex worker is representing her profession onscreen. What do you make of how sex workers are represented in movies?

Hollywood depictions of sex workers enforce stereotypes. When sex workers are not consulted in the development of those characters, when it’s men creating a fantasy world of how they think sex workers talk to each other, they’re not doing anyone a service. They’re feeding their own fantasies.

It’s almost like an extrapolation of escort review board culture – men talk about who these women are in their own little fantasy world to entertain each other. It’s garbage. We need to empower more sex workers and make sex workers feel safe enough to tell their own stories so that we can start changing the game ourselves.

Modern Whore is available to stream online here until April 24.