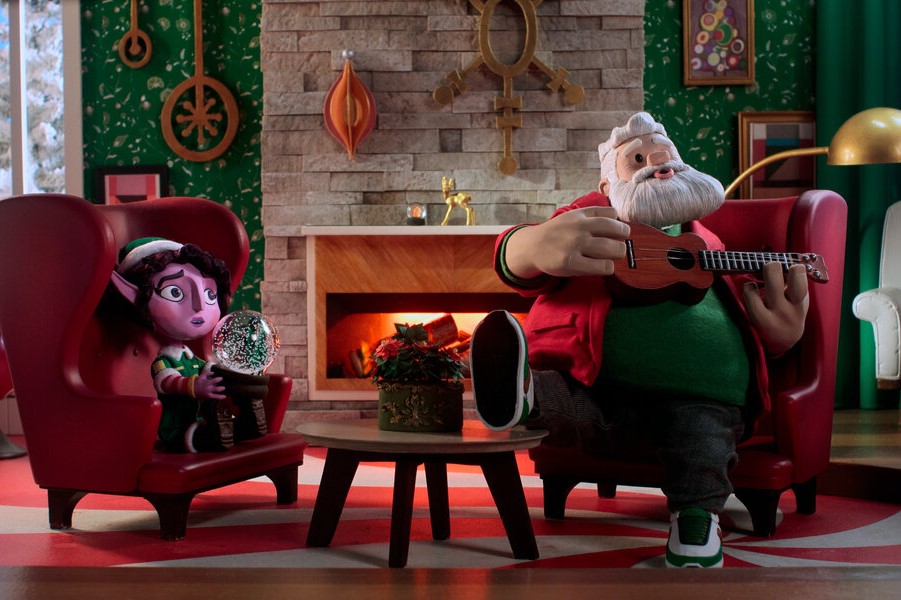 Our picks for the best new movies and TV shows hitting Crave in December 2021 include Olivia Colman and David Thewlis in Landscapers, post-apocalyptic drama Station Eleven and the Sex And The City sequel And Just Like That…

If you’ve seen all the holiday movies and specials a bunch of times, this new adult animated series could be a nice change. It’s about Candy Smalls (voiced by Sarah Silverman), who attempts to become the first female Santa Claus after the most recent one (Seth Rogen) is poached by Amazon on Christmas Eve. The voice cast is impressive and includes Gabourey Sidibe, Craig Robinson, Nicholas Braun, Joel Kim Booster and Maria Bamford. December 2

In this four-part drama – inspired by actual events – Olivia Colman and David Thewlis play Susan and Christopher Edwards, a middle-aged English couple who were arrested in 2013 for murdering Susan’s parents a decade and a half earlier. But this isn’t a true-crime drama; writer Ed Sinclair –  Colman’s real-life husband – burrows into the Edwardses’ co-dependent relationship, using Susan’s fondness for Gary Cooper in High Noon to illustrate her frame of mind. The project also reunites Colman with director Will Sharpe, with whom she made the deadpan family comedy Flowers; she also provided the narration for his recent feature debut The Electrical Life Of Louis Wain. Expect eccentricity, intensity and at least one awkward bit of shovelling. Mondays from December 5

The influential HBO series that helped sell a zillion cosmopolitans and pairs of Manolo Blahniks and even spawned Sex And The City bus tours is back for a sequel that follows friends Carrie (Sarah Jessica Parker), Charlotte (Kristin Davis) and Miranda (Cynthia Nixon) as they navigate their 50s in New York City. Fans will be eager to see how the series deals with Samantha’s (Kim Cattrall) absence (apparently her character will be living in London). And it will be extra sad watching co-star Willie Garson (Stanford), who died a month after finishing taping. December 9

Brooke Lynn Hytes is branching out from the Drag Race world with this reboot of the MTV Canada panel show that saw a group of gay guys and one woman talking about sex, dating and everything else. The Toronto drag performer told us the format felt dated, so it’s been revamped to include more diverse voices from across the LGBTQ2S+ rainbow. And unlike on Canada’s Drag Race, no one gets eliminated at the end. “This show was just fun,” she said. “We got to sit, talk, laugh and sometimes cry. We left not feeling like ‘I just crushed that person’s dreams.'” December 9

HBO’s excellent Music Box series of documentaries continues with director Penny Lane’s critical dissection of the smooth jazz phenomenon and its inventor, Kenny G. Much more than a biopic, Lane goes deep into the pop cultural circumstances and music industry context that gave rise to one of the most polarizing and successful musicians in recent decades – and Kenny G himself is very much game to go along for the ride. A smart, funny and illuminating film. December 2

The timing for this limited-series adaptation of Canadian Emily St. John Mandel’s acclaimed 2014 novel couldn’t be more appropriate. It’s set in a post-apocalyptic world where groups of survivors of a flu pandemic have to rebuild a new world. The cast includes Mackenzie Davis, Himesh Patel and Lori Petty, and the roster of directors includes Canadians Jeremy Podeswa and Helen Shaver. December 16

The true-crime phenomenon continues this month with a three-part docuseries that should hit home for Canadians. On June 18, 1982, Quebec-born supermodel Marie-Josée Saint-Antoine was stabbed to death in her Manhattan apartment. There were no clues, but the main suspect was Alain Montpetit, a major TV star in Quebec. Now a team looks at this cold case to see if they can dig up any new answers. December 16

Shoplifters Of The World

Stephen Kijak’s shaggy ensemble picture – set over 24 hours in Denver on the day the news of The Smiths’ breakup reaches the band’s American fans in August 1987 – is about the usual teenage stuff: fandom, heartbreak, coming of age and storming a radio station to get the metal DJ to play your epic new-wave misery music. The Wilds’ Helena Howard and Boyhood’s Ellar Coltrane are among the Smiths fans sent reeling by the announcement, and Joe Manganiello (who also produced the film) is pitch-perfect as Full Metal Mickey, the beefy, cynical counterweight to their fervour. He knows angry young men can grow into cranky old bastards. December 10

Ed Helms and Patti Harrison find an unlikely connection in Nikole Beckwith’s gentle two-hander about the friendship that blossoms between an older single guy and the 26-year-old woman he hires as his gestational surrogate. Helms is well-cast, but Harrison – a rising writer and performer who exploded as a comic force this year on Tim Robinson’s I Think You Should Leave – gets a part that makes full use of her spiky, hyper-alert energy. But this isn’t, strictly speaking, a comedy: it’s a smart drama about two lonely souls who drift into a supportive, moving friendship without ever becoming a couple. December 24

Here’s the full list of new titles available on Crave in December 2021. The * symbol indicates a TV show or movie that is only available with the Starz add-on.

The Bold And The Beautiful (season 35, episodes 46-50)
The Slow Hustle

The Bold And The Beautiful (season 35, episodes 51-55)
Murders At Starved Rock

Hello, This Is My Penis

Sex And The City: The Movie

Christmas Ever After
Comedy Central’s A Christmas Clusterfunke
Dancing Through Christmas
The Doors*
Free Angela And All Political Prisoners*
The Glass Castle*
Joshy*
The Limey*
Murder She Baked #2: A Plum Pudding Mystery
Pitch Perfect 2*
Shoplifters Of The World
Space Jam: A New Legacy
You Make It Feel Like Christmas

The following titles are leaving Crave in December 2021.

The Kindness Of Strangers

Duran Duran: There’s Something You Should Know
New Order: Decades