Q&A: Bruce LaBruce sends up second-wave feminism in The Misandrists

The Toronto-based cult filmmaker on his lesbian separatist satire, rejection and gender segregation on the gay film fest circuit and the state of radical queer cinema 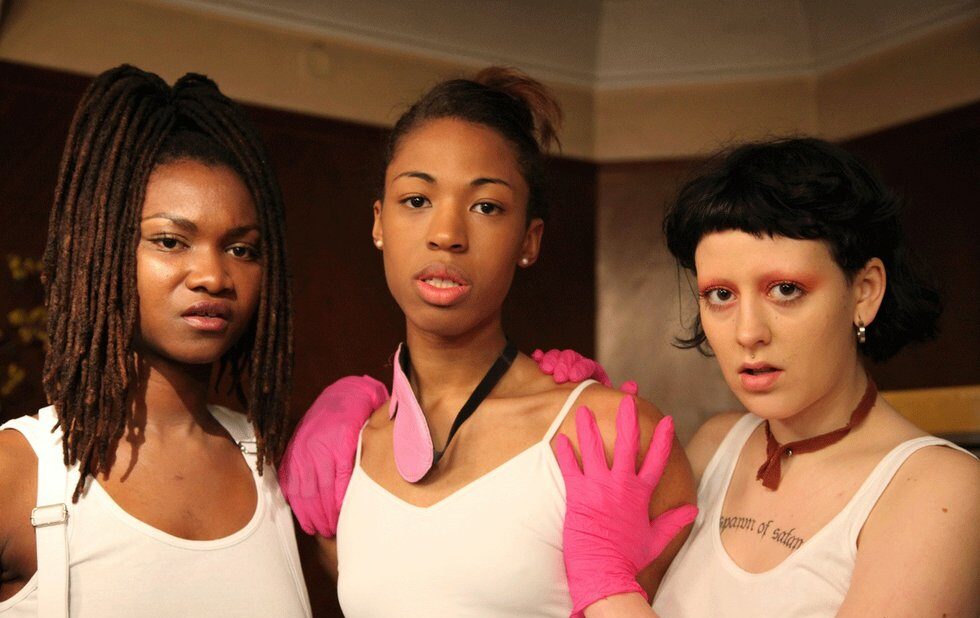 The last time Toronto got a heavy dose of hometown queer pornographer Bruce LaBruce, it was 2014.

The city was basking in the euphoria of World Pride, Rob Ford was mayor, and the director of such sexually explicit agit-prop satires as and The Raspberry Reich and Hustler White was receiving the career retrospective treatment at TIFF Bell Lightbox.

Produced in Germany and partially financed through crowdfunding, The Misandrists follows the Female Liberation Army, a cell of lesbian separatist terrorists posing as Catholic nuns and boarding school students “somewhere in Ger(wo)many.”

It features a cast of underground stars and cult actors – including artist/DJ Viva Ruiz, glam-punk icon Kembra Pfahler and model Kita Updike – classic cinema references to The Dirty Dozen, The Beguiled and The Trouble With Angels, some graphic sex and a castration scene so vivid it’s practically educational.

It’s familiar territory for LaBruce, whose work has long criticized those who define LGBTQ equality in the context of hetero-patriarchy. By reviving second-wave feminist idealism, The Misandrists sends up both radical liberationists and assimilationist feminism that seeks to replace men with women in capitalist power structures.

The film premiered at the Berlinale in February and screened at the Guadalajara International Film Festival in March but does not yet have a Toronto premiere date. LaBruce says it’s been rejected by one major gay film festival, which he blames on the conservative attitudes The Misandrists parodies.

Why make a film about lesbian terrorists?

It’s a very second-wave feminist concept. Why use that device to talk about feminism today?

Well, the film is set in 1999. I did that deliberately to slant it more toward the idea of second-wave feminism, and the film is a critique of both second-wave feminism and post-feminism, in which women are merely trying to gain power within the corrupt neo-liberal system that now exists. Their idea is to become equal in a corrupt system, which is a failed strategy. The film is both a critique and kind of an affectionate tribute to these extreme radicals I can totally sympathize with.

I hung out with radical lesbian separatists when I was younger. Of course you’re sympathetic to their cause if you look at the weight of history, how entrenched the patriarchy is and how women have been systematically exploited and marginalized for millennia. You understand why they would want to just try something totally outside of the existing power structures.

What are some experiences you’ve had with lesbian separatists?

When I lived in San Francisco in the 80s, I had lesbian separatist friends who would take me to gatherings. There would be, like, 100 or 200 women, and they insisted on bringing their gay friends. We were the token gay friends – the opposite of fag hags. Because there were so many problems in the gay community in terms of racism, classism and sexism, we were considered the smart ones. But we practically had to be protected by really tough dykes from some of the women who didn’t want us there.

In university in the 80s, I took a postgrad course called Psychoanalysis And Feminism, and I was the only male in a class of about 18. The prof was male, a lay analyst, and we’d meet at his home. At the end of the year, they wanted to continue to meet throughout the summer extracurricularly. They took a vote about whether I would be invited, and I was rejected. Again, I kind of understood, but it was annoying at the same time since I’d made friends with some of those people.

You recently said The Misandrists was rejected from an LGBT film festival because it’s a film about lesbians directed by a gay man.

It’s probably an issue. The festival was Frameline in San Francisco, which has become such a neo-liberal city. The queer identity of the festival has really been severely reduced.

It’s the same thing with distributors and sales agents. It’s this predetermined notion: the fix is in, you can’t change it, and there’s no point in trying to break that cycle.

There’s a tendency in gay and lesbian festivals to be ideologically fixed in that way. Literally, they are segregated. You go to a lesbian movie and it’s only women [in the audience]. I’ve seen that in London and San Francisco. It’s something the LGBT circuit hasn’t really broken out of – that ideologically entrenched mentality.

[Editor’s note: When asked for a response to LaBruce’s comments, Frameline executive director Frances Wallace told NOW: “Frameline is able to program only about 15 per cent of the 900 films submitted, so we do not comment, either publicly or to the directors, about the many films that we are not able to include in the festival lineup. We always look forward to considering Bruce LaBruce’s work, and have a long history of programming quite a few of his titles on a variety of topics.”] 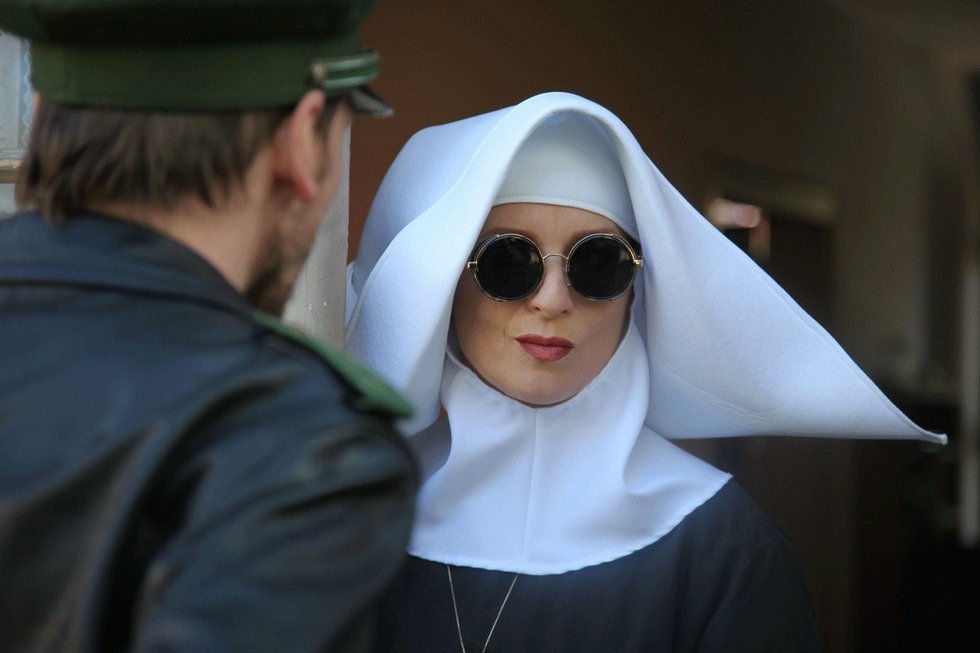 Susanne Sachße in The Misandrists

Where do you see prescribed attitudes changing?

In certain European cities at more alternative queer festivals. The Pornfilmfestival in Berlin is extremely mixed in terms of trans, gay, lesbian and everything else. On the other hand, people say, “Oh well, maybe queer festivals are redundant and should be discontinued because they’re not necessary any more.” I was on the Queer Palm jury at Cannes a couple of years ago, and they could barely find enough queer films for us to watch. That’s true of a lot of A-list festivals. The programming doesn’t allow for a lot of radical queer or even queer in general films.

Is that purely due to conservatism or is it also an issue of quality?

I was on the jury of the Guadalajara International Film Festival for the gay section, so I’ve been watching a lot of films with queer content, and the standard of gay/lesbian/queer filmmaking is really high now. There’s a lot of impressive work being made. So I still think there is this culture of conservatism in some festivals when it comes to radical queer ideas.

But that’s typical across the board – with race and gender – not just queer people. When people hit power, they don’t try to change the system.

Economics do always play a big part, too. My distributors will insist on using a hard-bodied guy on the DVD cover even though it’s not central to the movie. It’s pandering to the idea that gays are only interested in gay sex. It deals in conventional notions of what is sexually attractive.

Are there ways to game the system?

Lately, my films have been getting into fantasy film festivals, which is cool because I’ve worked more in genre films in the last 10 years. So that’s one way of getting out of it. I still try to make films with queer content, but if you make a zombie film or, for example, The Misandrists is in the schoolgirl film genre, then you can reach a broader audience.

I should mention that The Misandrists also has a very central transgender plot dealing with that second- wave feminist issue of whether to accept transwomen as women in any kind of lesbian or feminist context.

How big an issue do you see that being­ still?

The Michigan Womyn’s Music Festival, which was ground zero for that debate, has been discontinued. You run into social justice warriors online, and some of a certain stripe – I don’t know how widespread they are – are vicious toward transwomen. They think they’re perverts with really sinister motivations.

Who are some filmmakers working with radical ideas that you like?

[Jill Soloway’s] Transparent, of course, which is so brilliant because it also is so much about the Jewish experience and it treats both [the Jewish and LGBT] subjects equally.

I really like Sean Baker, who did Tangerine, and João Pedro Rodrigues, who did The Ornithologist. There’s Alain Guiraudie, the director of Stranger By The Lake and Staying Vertical. His films are problematic in some ways, but he’s definitely an auteur who is doing interesting things.

There’s Mexican director Amat Escalante, who made an homage to the Isabelle Adjani movie Possession [The Untamed]. There are a lot of people making queer work that really challenges the status quo.

Moonlight is a very impressive piece of cinema. I was a little surprised at how tame it was in terms of the representation of gay sex. I thought it really tip-toed around a lot of issues and toned them down, which is why it was so popular.

In some ways, it’s conservative because it’s about the idea of a mono­gamous couple. The story is framed in terms of coming of age, monogamy and trying to fit into society rather than being oppositional. Those are the films that people want to see on a commercial level.