The Toronto-born co-creator, showrunner and co-star of the wildly popular CBC comedy reflects on the show's origins, ending and Canadianness

After Schitt’s Creek ends, Dan Levy will develop his own TV projects through a three-year deal with Disney’s ABC Studios.

It may seem difficult to believe that Schitt’s Creek – the beloved CBC sitcom about a rich family that relocates to a small, quirky Ontario town after losing it all – was inspired by the likes of MTV reality series Laguna Beach and The Hills. But upon closer inspection, there’s no mistaking it.

It all began with Dan Levy, son of Eugene, and Jessi Cruickshank recapping and ridiculing the reality series with a singular wit and wink on MTV Canada’s The After Show, making their own half-hour more of a pleasure than their subject matter.

“Looking back, working with reality shows that were following the lives of privileged people was a really interesting social study,” Levy tells NOW. “We essentially editorialized the content to let our viewers know that it was fine to indulge in reality TV, but we shouldn’t look to those people as heroes. It’s entertainment, but it’s not necessarily how we should live our lives. That philosophy carried with me when it came to breaking the ground on what would become Schitt’s Creek.”

Despite being a late-night talk-show geared toward a young audience on a network that wasn’t known for original programming, The After Show cemented Levy’s creative process as the co-creator, showrunner and co-star of Schitt’s Creek, which airs its finale episode tonight (April 7) after six seasons.

“The idea of building something from the ground up has always been really exciting to me,” he says. “The After Show was a really small team of three to four people, Jessi and I included. Once I left MTV, I knew that I wanted to create scripted television because of the sketches we would do, and a Christmas special we did that I got to write and star in. I loved the scripting process and putting it all together.”

But hosting had never been in Levy’s plan. Writing felt more natural, more creative. When The After Show wrapped in 2010, Levy made his way to Los Angeles. In 2013, he formed Not a Real Company Productions with his similarly well-browed father.

After pitching Schitt’s Creek to his dad, the two went on to co-create the series for CBC, adding comedy legends Catherine O’Hara and Chris Elliott to the cast, with Annie Murphy, Emily Hampshire and sister Sarah Levy adding to the uniquely charming line-up. For six seasons, they’ve played the Rose family, a quirky group of characters who, against all odds, fall in love with their new town and become a lot less superficial and a lot more sentimental. 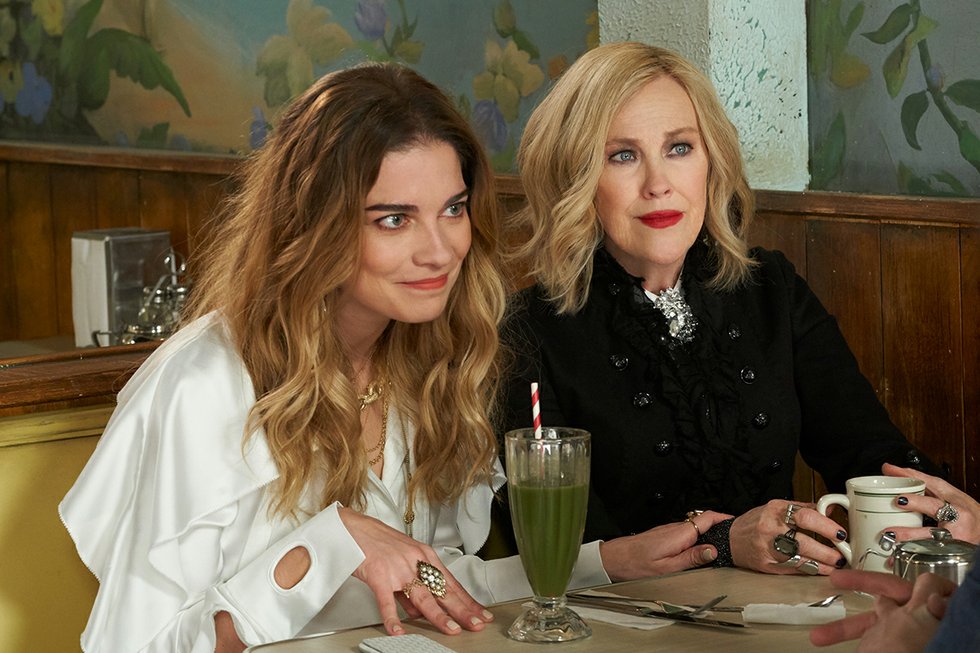 In fact, it’s that heart that seems to have attracted cult-like fans. That and the show’s off-key humour, which is very meme-able and gif-able Levy brand. (For many television shows, winning Twitter can mean winning it all.)

A single scene will have you sobbing out of joy and, in the next second, choking it back with laughter. It’s an impressive balance that catapulted Schitt’s Creek into iconic sitcom territory.

“We always want the audience to feel safe, and that lies in a certainty that when they tune into the show, we’re never going to lead them astray,” he explains. “We’re always going to live in this lovely little world of hilarity and sentimentality. Our characters might change and flourish, but the tone of the show remains the same.

“The important thing was always to be very critical about when and how we chose our more sentimental moments,” he continues. “There always had to be something that broke the ice a little bit in terms of alleviating the tension so that our audience never felt too sad or too scared.”

When it came to the sixth and final season, which has seen patriarch Johnny (Eugene Levy) franchise his motel business with Stevie (Emily Hampshire) and town mayor Roland Schitt (Elliott). Matriarch Moira (O’Hara) rediscovered her acting career with wigs aplenty, while Alexis (Murphy) become a successful publicist with plans to break out on her own. Levy’s David fell in love with Patrick (Noah Reid) and started his own business.

It looks like the characters are going their separate ways, and evolving to a degree that’s rare on primetime sitcoms.

“It was really important that we staggered the details of how the show would end over the course of the entire season, and not just back-end them into one episode and try our best,” Levy explains.

To nail the landing, he studied the best of series finales past.

“It was a lot of research. There were common threads to the finales that I really loved, and that tended to be stories wrapping up over a season, and having an ending the audience would appreciate but might not see coming,” he says. “We wanted to send viewers off on a lighter note, one that makes them feel joyful because that’s been the thread of the entire series.”

That sentiment is felt not just in the series’ humour, but in its characters’ evolution. In the penultimate episode, Stevie asks David why he wants to move back to New York City to friends who had never been kind to him. Tearfully, he responds, “Because I want those people to know that I’m not a joke, and that I’ve won.” It’s not just David’s insecurity, but one the entire family has worked through over six years. 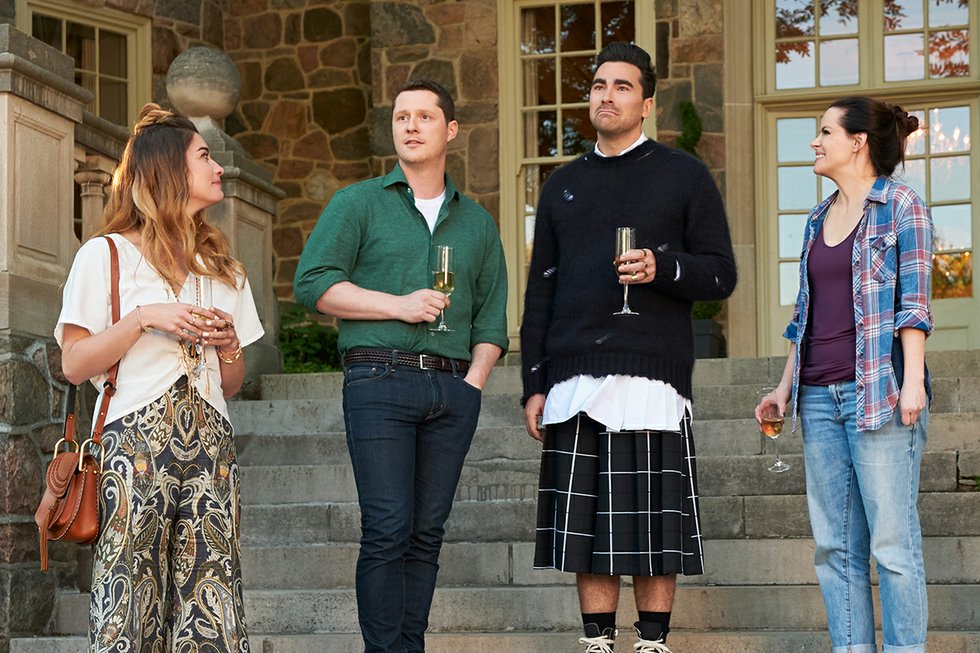 He realizes he doesn’t actually have to move back to complete his journey. He already has, in finding work that uses his talents, in finding love that makes him feel himself and in finding a town that he – believe it or not – fits right into.

“We care so much about these characters and know them so intimately that they led us down this path,” says Levy, who put an emphasis on a real-life version of growth rather than one that could only make sense on screen. “We didn’t want them to stay in Schitt’s Creek as a group forever because that would just become this strange enmeshment that I wasn’t interested in. I wanted this family to learn, grow, and then be released back into the wild changed, better people.

“It’s something that I wished that I had at some point in my life – the ability to just extract myself, reprioritize, and then be reintroduced back into society a better person,” he says. “Actually, that’s what this show has done for me. It’s given me time to think about life, and what the true value of love and joy is, and that it is rarely, rarely, rarely tied to anything financial.”

The acceptance David and the Roses find in Schitt’s Creek – a place where bigotry doesn’t exist, which has helped make it a favourite in the LGBTQ community – feels reminiscent to Levy of the way Canadians fell in love with and placed the series on a pedestal before anyone over the border caught a glimpse.

“It’s been really overwhelming, because I will never not see this show as a small Canadian family,” he says. “We shot the show in Canada, it was a Canadian cast and crew. And I feel like the show embodies the Canadian identity and the philosophy of acceptance, love, compassion and empathy. So for it to have become a success story on an international level has been remarkable, because I really see it as a representation of Canada and all that Canadians can do.”

Levy adds, “If Schitt’s Creek can, in some way, open the door a little wider for more Canadian television to be seen on the world stage, then that’s a wonderful thing even just from a financial standpoint, because it means a greater investment, which means more opportunity, more ways to build the industry, to support our own and continue to take risks.” 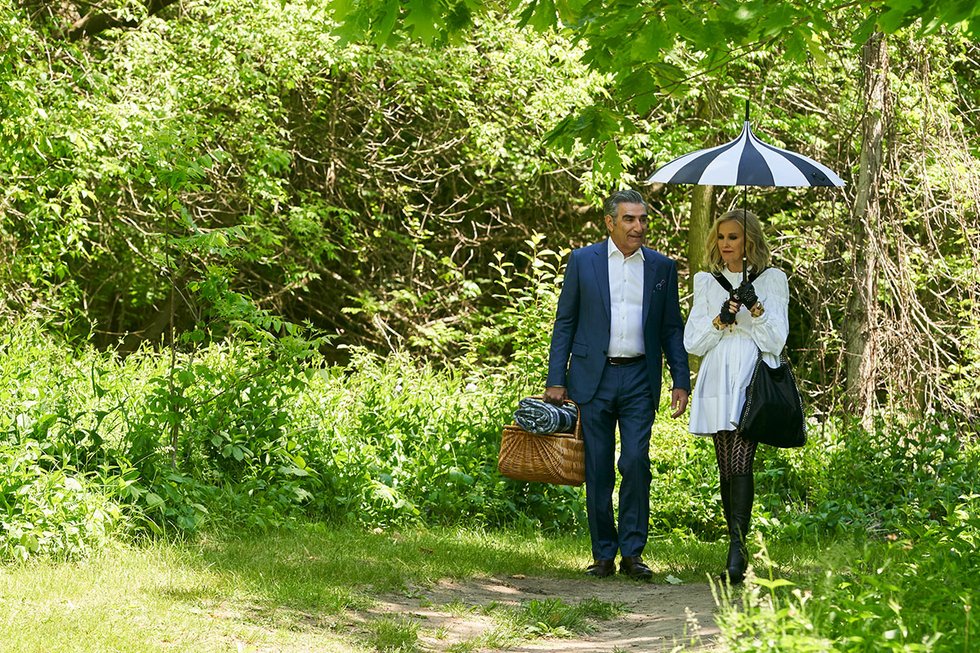 But don’t expect a Schitt’s Creek movie any time soon, though Levy has all but guaranteed there will be one – eventually. It’s all part of that process that led him to leave The After Show when it was on top. Similarly, Schitt’s Creek is ending at its peak.

“The viewers need to take a breath, because nothing we will do in the next year or two will come close to what we’ve done in these last two episodes,” he says. “I’m so proud of this show and what we’ve managed to accomplish that I wouldn’t want to do anything to tarnish that. We never wanted to overstay our welcome.”

With his signature smirk practically audible over the phone, Levy adds, “What I have been thinking about is what’s next.”

The multi-hyphenate talent recently announced a three-year overall deal with Disney’s ABC Studios, through which he is already hard at work developing several shows.

“All I can really do is take the information and the life lessons that I’ve learned in making this show and apply it to what I want to do next,” Levy concludes. “Schitt’s Creek was a passion project and we were all such a close-knit family that it has informed me in terms of the standards that I want to continue to employ on my next work, which is to leave your ego at the door and show up wanting to make good TV. It’s as simple as that.”