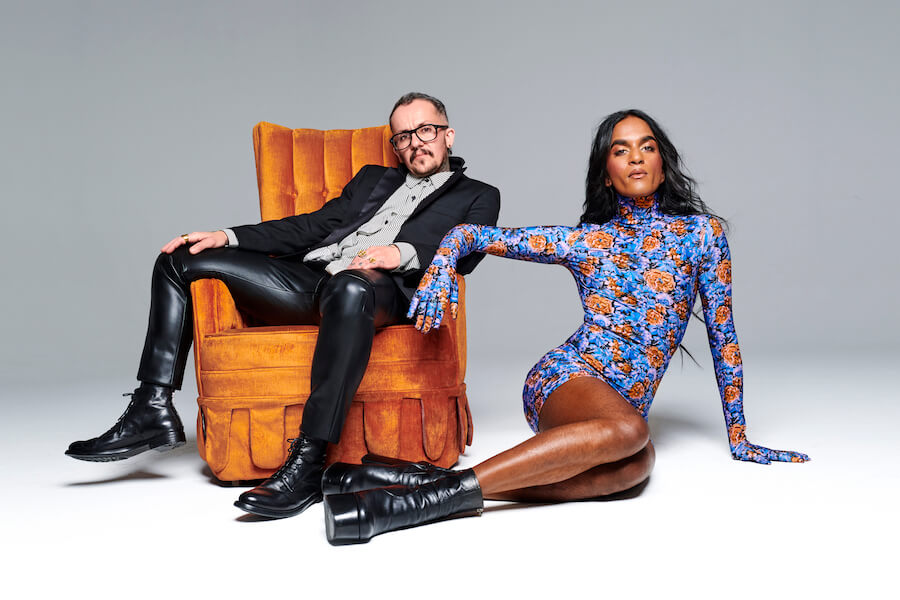 The makeover genre is well-worn territory on reality TV, but OUTtv’s Shine True puts a few twists on a familiar format to create compelling drama out of seemingly mundane situations.

Shine True is about transformation, but it also manages to subvert the usual portrayal of people defying gender norms by hyper-focusing on the part of the story that starts when the coming-out narrative ends: The person has told friends, family and colleagues. Now what?

Enter Toronto-based musician and relationship coach Lucas Silveira and New York-based model and photographer Richie Shazam. The duo spent three months on the road last summer, travelling during the pandemic between Toronto, Chicago and Reno, and meeting with trans, non-binary and gender non-conforming young adults apprehensive about leaning fully into themselves.

In each episode, Silveira and Shazam arrive, listen to each subject’s story, meet with their families and then take them shopping so they can debut their new look at a small, COVID-appropriate social gathering.

Ronnie is fearful of appearing more glam and femme in public and gets coaching from Silveira, styling advice from Shazam and goes to their first gender-affirming hair appointment at Toronto salon Proudest Pony.

The process is familiar, but Shine True’s emphasis is on ever-evolving experimentation and growth rather than definitive perfectionism. It’s an optimistic series about possibility, one that’s also about families attempting to show love even when it’s clear they don’t completely understand queerness.

“I really want to make fashion more accessible and tangible – at least the conversation of it,” Shazam explains in an interview. “As a kid, I was sneaking out of my house and I would completely transform on the train ride into the city. I would have a backpack of clothes and change my outfit because the way that I presented was not accepted in my household.”

Other Toronto-based subjects on Shine True include Jaden, who isn’t quite sure how to pull off a more masculine silhouette following top surgery. And in Georgetown, Juan wants to adopt a more gender non-conforming style, but they are faced with a dearth of local shopping options – a situation only compounded by the pandemic’s impact on local businesses.

Ahead of the show’s premiere, NOW Zoom called Silveira and Shazam to chat about reality TV tropes, the rise of genderless fashion and helping trans, non-binary and gender non-confirming people define their sense of value.

The Netflix documentary Disclosure made the point that screen portrayals of trans people have largely been on reality or daytime TV – for better or worse. What do you hope this show will add to that canon?

Richie Shazam: The blessing of this show is that it’s an all-queer crew and cast, and all of our subjects are BIPOC/people of colour. It’s really integral to give us this position of power to tell our stories. It’s not this scripted situation where there’s a loss of authenticity and a loss of our ability to speak up for ourselves. It’s really about respecting our stories and this idea of queer family.

Lucas Silveira: As somebody who grew up not seeing any trans people on television except exactly what you said, which was exploitive representations, doing this show is anti-that. It shows the absolute authenticity of what trans people are like, the spectrum of trans lives and it goes in from that place of humanity. We’re able to explore who we are as human beings without having to answer to this cis-heteronormative idea of what we should and shouldn’t be.

What did you want to bring to the makeover format, which is such a familiar format on television?

RS: Makeover shows have this idea that you have to present in a certain way. You have to do a complete 180 of perfectionism that is suited to the binary. Our docuseries works with each subject to really find the things that they are drawn to, really understand their stories and how their stories impact their identities and how they want to present.

RS: Us transgender non-conforming/non-binary folk are always on the cutting edge of fashion and style. We’re always so much ahead of the curve because we’re always thinking about our present and our future. Historically, we’re always thinking about today because our tomorrows aren’t promised. We really try to show out, show off, feel good and feel glam. I feel like this show is so cool because we’re finally able to look at our futures, and how we want to feel.

One thing that connects the subjects is this idea that they are constantly thinking about how others perceive them – with good reason in some cases. It seems like you really try to get them out of that mindset. How did that theme resonate with you?

LS: One thing that I think resonates with most trans people is taking that one step into yourself because you actually feel like if you do, you won’t be loved anymore. That is the piece that we always carry with us as trans folks. If we actually become who we need to be and who we are in our truth, that other people will actually leave us. That’s the piece in value that we need to have first in ourselves. Interestingly enough, it was through clothing that I first expressed who I was in my gender. It was like a catalyst to me being able to find that comfort. I came into the world expressing that part of myself, my masculinity, and how I see my own maleness, because I do fall on the binary. But to see so many folks, especially in the non-binary world, be like “this is something people don’t understand” we had to be like, “You know what? People don’t need to understand – all they need to do is love you and accept you.”

RS: For our community, it’s very important to constantly play with different silhouettes and really find what feels most comfortable. I really found myself in Salvation Armys, and by trying on all different things and really experimenting. That’s the beauty of our identities – they’re not fixed. We can do whatever makes us feel the best. I’m a glam girl through and through. I wanna look good. I want to feel good. And I want to project fantasy. I want to give the girls something to talk about. You will never see my troubles. I got a lot of them but I’m never gonna project that. Period.

How are you seeing the high street shops and designer brands interpreting this or jumping on ‘genderless fashion’?

RS: It’s very interesting because not only is [high fashion] not affordable, but they also love to use our language to sell clothing that is all-encompassing. You may see something you can’t afford but you can go to vintage stores or second hand shops and create that silhouette with whatever means you’re working with.

What was it like shooting with the parents and family members and inserting yourselves into someone else’s family dynamic?

LS: It was always beautiful no matter what, because you could see the parents had this desire to be in a place of acceptance, if not fully understanding. It was so beautiful to see how these folks were going in the complete opposite of everything they’d been taught to believe and deciding that, because of their love [for] their child, they were going to break that down. That in itself speaks to me about the hope we have in humanity for folks to decide that love is what matters.

RS: We’re literally just listening and their parents are also looking at us. It’s also making queerness more tangible and seeing the beautiful rainbow spectrum IRL. Talk about quasi-triggering stuff happening – the parents were asking us questions and trying to mirror their child’s identity with us. We’re like, “No [your child’s] journey is different than ours and it’s not linear.” But we’re also creating a very easy language. That’s also what I learned: Not complicating things because it gets very complex very quickly. It’s about knowing that real change happens through love and understanding.

Did you come out of the show with a different perspective?

LS: It was explosive as far as personal growth. I learned so much of what it takes for certain people to be able to just move into something that to somebody else seems so simple, but for them is a huge step. I learned a lot about courage. Like Richie said, we’ve never had the promise of a future and we were taking part in something that feels not just like a promise of a future, but we’re taking a step in educating people. Getting close to my community in a way that felt really safe – we aren’t always necessarily safe to each other. We’re always feeling hyper vigilant about what’s around us. For me, it felt like leaning a little bit myself even though I was the one being leaned on.

RS: I’m definitely not the same person that I [was] before going on the road to work on this show. We as trans/gender non-conforming/non-binary folk deal with a lot of our dysphoria personally behind closed doors. People are judging us on our exterior and how we’re presenting, but they don’t want to hear what’s coming out of our mouths. That’s why it’s imperative when we speak [that people] listen to us and what we have to say. If you don’t want to hear it, just respect it. Society just wants to let us live in this marginalization. I don’t want to bask in marginalization. I want to break free from it.