The #MeToo movement has been a watershed, yet many women working in film and TV are still choosing to stay silent 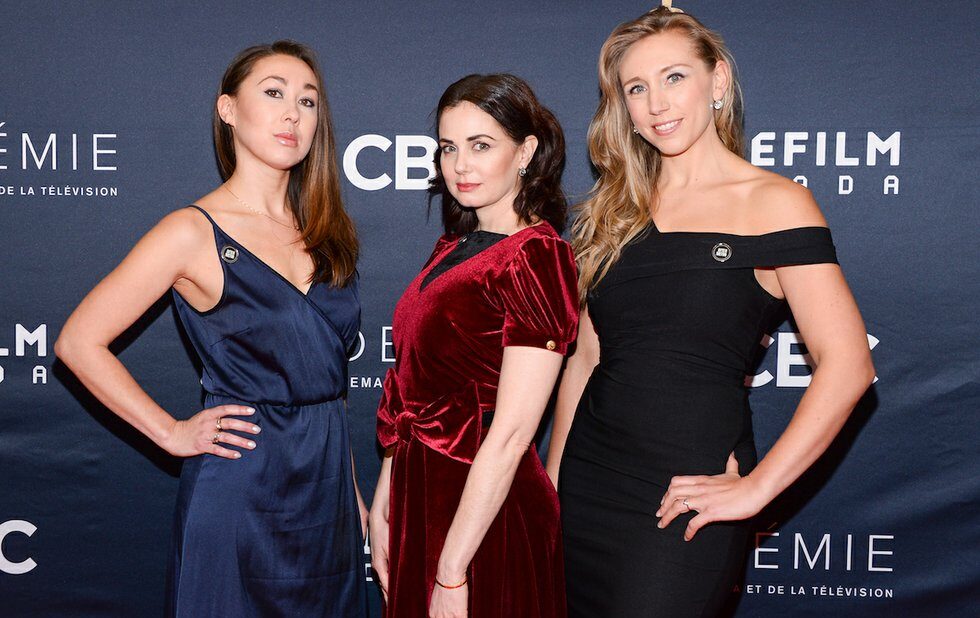 Margaret Atwood, Paul Sun-Hyung Lee and Sarah Gadon were among the many local stars sporting #AfterMeToo pins at the Canadian Screen Awards on March 11.

They were showing their support for an initiative founded by actors Mia Kirshner and Freya Ravensbergen and filmmaker Aisling Chin-Yee, which (like the Time’s Up movement in the U.S.) is tackling sexual harassment in the screen industry. The group has partnered with the Canadian Women’s Foundation to raise $7 million for legal and mental health support for survivors.

The women behind #AfterMeToo attended Canadian Screen Week, the official lead-up to the awards, and walked red carpets alongside industry peers who are still figuring out how to change the current climate.

On March 8, an industry working group with representatives from organizations across the film and television industry (ACTRA, the Canadian Media Producers Association, the Directors Guild of Canada and the Canadian Academy among so many more) released a draft of the Canadian Creative Industries Code of Conduct. It’s the first in several planned steps to deal with sexual harassment in the local entertainment industry and includes a “zero tolerance” policy, announced last fall.

“The industry-wide code of conduct is great,” says #AfterMeToo co-founder Chin-Yee, a Montreal-based filmmaker who I spoke to during her visit. “There shouldn’t be sexual harassment happening at our work spaces. Our work spaces are film sets, festivals, wrap parties, auditions and pre-interviews – all of those places where your work relationship exists. Everybody is now agreeing on that. But the code of conduct doesn’t actually seem to have any precise actionable things in it. That’s the next step.”

“It’s very hard to self-govern these things,” says Chin-Yee, expanding on that last point. “We all have our own stake in a film, whether it’s financial or whatever else. We can’t have a bunch of people working within the same industry governing themselves.”

In the six months since the Harvey Weinstein allegations surfaced, we’ve seen the #MeToo movement expose Kevin Spacey, Brett Ratner and Matt Lauer, among many others. You’ve probably also heard the push-back arguing that the “trial by (social) media” has gotten out of hand.

In Canada, only a few men have been publicly accused (like Albert Schultz and Patrick Brown). I’ve heard of others keeping their guard up (and collecting character reference letters in case a finger is pointed their way). But most women I’ve spoken with are choosing to remain silent because committing the next few years to fighting public scrutiny and our legal system is more than we can ask of anybody.

The working groups formed by those Canadian screen industry unions and organizations are trying to formalize processes that would allow survivors to file complaints – anonymously if need be – and for organizations like ACTRA, the Canadian Academy and the CMPA (among others) to act on them before having to resort to trial by law or media.

The “zero tolerance” policy remains vague. At this point we don’t seem to have a clear idea of what can be enforced.

A Toronto International Film Festival industry panel on sexual harassment held last fall included representatives like the CMPA’s Marguerite Pigott and ACTRA Toronto president Theresa Tova, who spoke with fist-pumping confidence that shit will get done. I had the impression a complaint would at least end with revoking someone’s union card. At this point, even that seems questionable.

Perhaps “zero tolerance” can look something like what’s going down in British Columbia.

While I was discussing #AfterMeToo with Chin-Yee in Toronto on March 9, Vancouver actor Michael Coleman was holding a press conference that same day to deny sexual harassment accusations. The allegations have not been proven in court, nor were they made public until Coleman addressed them.

Instead, according to Coleman, they were brought up in a town hall meeting held by the Union of BC Performers/ACTRA. He referred to the meeting as a “whisper campaign” that resulted in the Once Upon A Time actor losing work and having to remove himself from the acting school he co-founded, SchoolCreative Institute of the Arts. The Canadian Press reported that 14 instructors who resigned from the school returned after Coleman stepped aside.

I’ve heard of others losing work on the west coast as a result of so-called “whisper campaigns,” though they haven’t made their situations public.

What Coleman described in his press conference sounds like the swift and immediate repercussions we would hope for in a zero-tolerance policy, only formalized.

But while a whisper campaign might seem effective, it exposes the accuser to legal repercussions.

Anonymous complaints do not hold up in court, and if the accused claims an allegation has cost them work – as Coleman has – they can sue for defamation.

The zero-tolerance policy sounds like a worthy guideline and attitude for the industry to follow, but it’s not foolproof and won’t necessarily save anyone from a grueling legal process that regularly punishes women for coming forward.

Just look at what happened with Jian Ghomeshi. After #MeToo, can we hope things will be different?

For more on #AfterMeToo, listen to Radheyan Simonpillai’s podcast with Aisling Chin-Yee to hear more about their recommendations, her involvement in the #50WomenCan program and some blowback from representation efforts in Canadian film.