Cinema's biggest monsters face off in the climax of Warner's mammoth kaiju series, which is the perfect drive-in movie 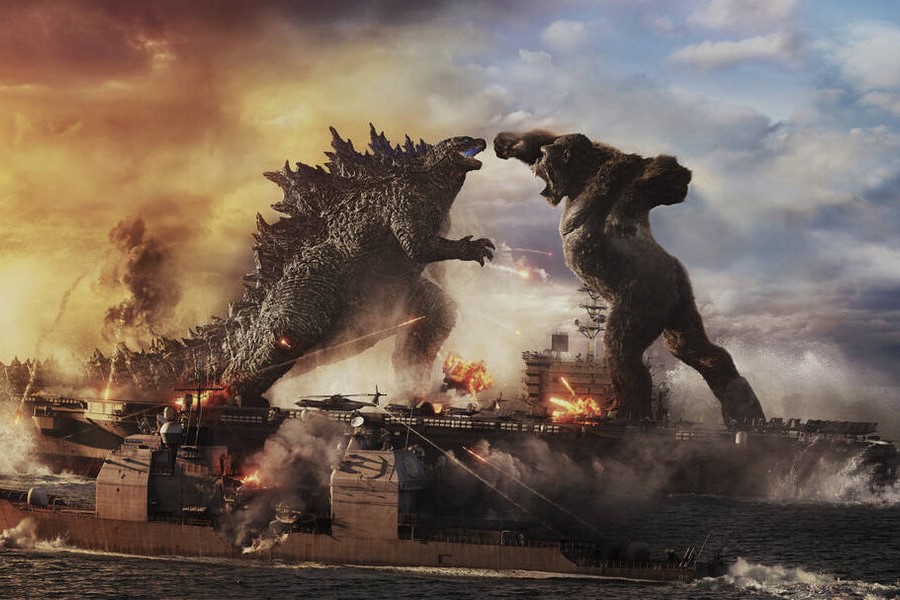 Godzilla and Kong, fighting on an aircraft carrier, in Godzilla Vs. Kong. Yep, this actually happens.

The title says it all: the culmination of Warner’s “Monsterverse” series – which began in 2014 with Godzilla and quickly gave us Kong: Skull Island and Godzilla, King Of The Monsters – is a battle royale between two of cinema’s greatest battle-beasts, scaling things up in every way from 1962’s pleasantly cheesy King Kong Vs. Godzilla.

Adam Wingard works the same trick he pulled with You’re Next, The Guest and even his Blair Witch sequel, taking a genre apart to remind us what we love about it. It may not come as a surprise that the thing we love about kaiju movies is giant monsters punching each other, but there you go.

Godzilla Vs. Kong doesn’t change things much from Michael Dougherty’s Godzilla, King Of The Monsters, which also worked to deliver super-sized monster fights while a handful of puny human scientists ran around the periphery trying not to get squished. This one just delivers a more satisfying version of that premise, paring down the monsters to a couple of primary combatants with very basic motivations: as “alpha titans,” Kong and Godzilla just want to crush one another on sight.

(Screenwriters Eric Pearson and Max Borenstein also offer a decent explanation for Kong’s absence from the last picture: Monarch, the super-secretive global organization that monitors monster activity, has been keeping him isolated since the 70s.)

As for the human characters, they’re still in the way. King Of The Monsters co-stars Kyle Chandler and Millie Bobby Brown are back as the remaining members of the Russell family: Mark runs Monarch these days, walking around with a clipboard looking important, and Maddie’s in high school listening to conspiracy podcasts about sinister cybernetics companies. Science has really levelled up in these movies; in the eight years since Godzilla first made landfall, we’ve gone from Windows 10 to antigravity ships, underground maglev trains, organic AI and more.

We also meet obligatory fringe scientist Nathan Lind (Alexander Skarsgård), who’s expanded on the Hollow Earth theory first put forward in Skull Island and also has theories about genetic memory, which could conceivably allow Kong to find his way back to his ancestral homeland. This gets him recruited by an industrialist (Demián Bichir) who happens to run the aforementioned cybernetics company and is looking for a fabled power source that might help him with… something, and who reconnects with Dr. Ilene Andrews (Rebecca Hall), a Monarch scientist who’s been working with Kong for the last decade. She has a foster daughter, Jia (Kaylee Hottle), who is deaf and communicates in sign language. This will be important later.

Meanwhile. Maddie and a nervous pal (Hunt For The Wilderpeople’s Julian Dennison) track down her favourite conspiracy podcaster (Brian Tyree Henry), who has some ideas about why Godzilla attacked that cybernetics company.

Those of us who grew up on the original Godzilla movies might have some ideas about that too, and the movie knows it: Godzilla Vs Kong is structured to deliver a series of nostalgic spikes, building their narrative from Toho’s greatest hits and all of the previous King Kong movies, including Peter Jackson’s epic 2005 remake and the regrettable King Kong Lives. (It also manages to fit in elements of Conan The Barbarian and, somehow, Lethal Weapon 2.)

There’s an undiscovered world where nature has run wild, kids running around solving problems the grown-ups can’t, technology creating more problems than it solves, the lyrical image of a giant ape on a big boat. And, of course, full-on furious combat between giant monsters.

It’s all played on the razor’s edge of straight and silly, with action sequences that are beautifully lit, convincingly choreographed and genuinely spectacular: as in all of these films, the monsters are allowed to fight strategically, displaying some level of intelligence and even character. And in Godzilla Vs Kong there’s a genuine thrill in realizing a filmmaker is playing with almost nine decades of cinematic history, and having the very best time.