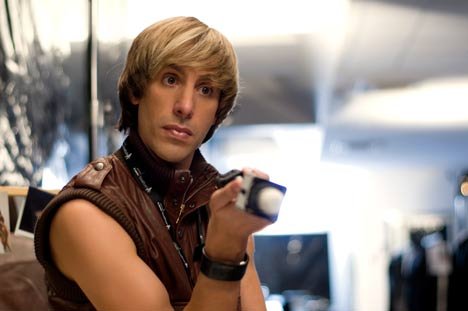 For his follow-up feature, Baron Cohen has brought another of his Ali G characters to the screen: Brüno, the fey Austrian host of Vienna’s acclaimed Funkyzeit fashion television show. And he’s done exactly the same thing that he did with Borat.

Like Borat, Brüno attracts the curious and the publicity-hungry. Like Borat, he specializes in being obnoxious and testing the limits and patience of his unwitting marks. And like Borat, somehow he ends up sticking his ass in the camera about once every 20 minutes.

But unlike Borat, who journeyed across America to take advantage of well-meaning Middle Americans and to stuff Pamela Anderson in a bag, Brüno has no overreaching mission and no real purpose he’s just there to lampoon celebrity self-absorption and unnerve unsuspecting passersby by being really, really gay at them.

I should explain that. In scene after scene, Baron Cohen and Charles throw transgressive images and suggestions at the audience, daring them to take offence. It’s shock comedy based entirely on gay panic. No more than five minutes in, we’re plunged into the bedroom with Brüno and his Thai dwarf lover Diesel, who engage in a series of joyous (if physically impossible) sex acts covered only by the same strategic black rectangle that appeared in Borat’s big wrestling scene.

It’s not particularly funny after the first 10 seconds, but it goes on and on and on – and if you don’t laugh, well, you must hate queer sex. Or Thai dwarves. Or Austrians.

Baron Cohen’s comedy is almost entirely based on trapping people in a room with a merciless exaggeration of a stereotype – the clueless journalist, the uncouth foreigner, the predatory homosexual. If he doesn’t get the appropriate degree of discomfort from his subject, he turns up his own volume until he does… which, in the case of Brüno, usually involves some manner of ass play.

To be fair, there was a lot of physical discomfort in Borat, too, but that movie balanced its outlandishness with some incisive cultural commentary, and its cross-country quest gave it a semblance of structure. Brüno’s just a wan copy, flying all over the globe in the hopes of landing on an idea that will pull the whole thing together.

And it never does.

For another view read I heart Brüno.