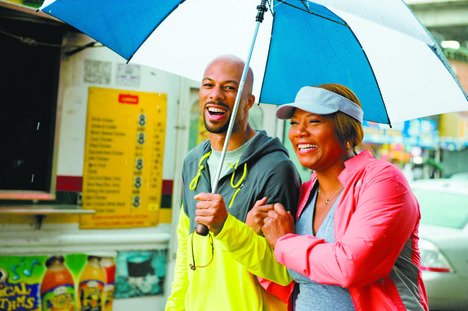 Common and Queen Latifah share the Wright kind of chemistry.

Common and Queen Latifah share the Wright kind of chemistry.

Just Wright may not break any new ground in romance movies, but it’s smartly assembled and appealingly cast. You couldn’t ask for a more affable date movie.[rssbreak]

Queen Latifah and Common have comfortable chemistry as a physical therapist and an NBA star who grow unexpectedly close while she helps him recover from a knee injury that could end his career. One small problem: he’d been engaged to Latifah’s gold-digging godsister (Paula Patton) prior to his injury.

Yup, it’s one of those movies – we know everything that’s coming, and director Sanaa Hamri knows we know. But rather than just slap the parts together as required, Hamri lets her movie breathe. She’s great with actors, and she gives both Latifah and Common the space to carve out nice little moments for themselves within the predictable beats of Michael Elliot’s script – much as she did for Sanaa Lathan and Simon Baker in her debut feature, Something New.

Hamri’s skills extend to the supporting cast, too – especially Pam Grier as Latifah’s mother and Phylicia Rashad as Common’s. They’re perfect choices for their characters, and it’s nice to see both women back on the big screen.