Review: Once Upon A Time … In Hollywood is Tarantino at his most fetishistic 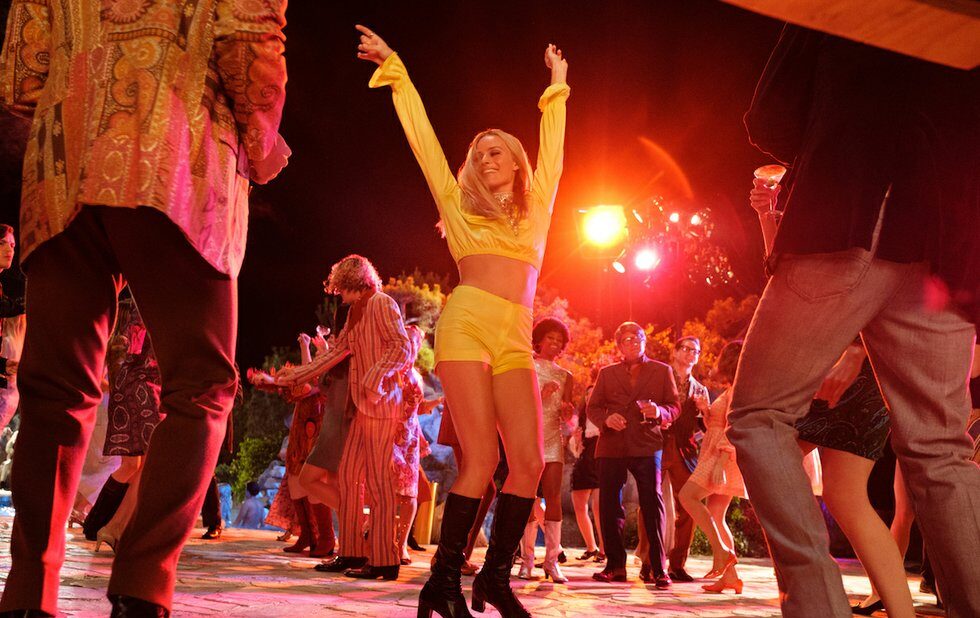 Margot Robbie plays Sharon Tate in Quentin Tarantino's Once Upon A Time ... In Hollywood.

Once Upon A Time … In Hollywood is two hours and 41 minutes of grade-A Quentin Tarantino fetishization: of cool cars and TV westerns, of square-jawed matinée idols and sunny blonde ingénues, of rugged stuntmen and good acid, of Los Angeles in 1969, when there was a movie theatre on every block and cute girls wore crocheted tops in the sunshine and the music on the radio was just starting to slide from Summer Of Love bliss to Altamont rage. (And women’s feet. There are always feet.)

He doesn’t really remember any of it; he was six at the time. But he grew up on the movies and TV shows of the era, and now he’s finally got the chance to make a picture about it, tailored to his own predilections and interests.

So here’s Once Upon A Time … In Hollywood, a sun-blasted, casually plotted meander through dusty backlots and landmarks that makes a big deal of telling us the specific days on which it’s taking place, because there are important historical events tied up in the story.

In the first scenes, we’re introduced to our principals: Rick Dalton (Leonardo DiCaprio), an aging movie star now taking guest spots as the heavy-of-the-week on disposable network TV shows; Cliff Booth (Brad Pitt), Rick’s stuntman, driver and unofficial therapist, and a rising starlet named Sharon Tate (Margot Robbie), who’s just returned from a shoot in England with her new husband, the filmmaker Roman Polanski (Rafal Zawierucha). Sharon’s house is just up the road from Rick’s in the Hollywood Hills. If you need to Google her, I’ll wait.

Having thus established the relationships between these characters – two fictional, one all too real – Tarantino spends the next two-plus hours accompanying them on their daily business. Rick has a role in a TV western and winds up hanging out with the show’s stars. They seem nice.

Cliff drives Rick to the set in the morning and picks him up in the evening, and in between he fixes some stuff at the house, drives around Sunset Boulevard and keeps running into the same hitchhiker (Margaret Qualley), who eventually convinces him to give her a lift to the Spahn Ranch, where she lives and where Cliff and Rick used to shoot a TV show. Her friends are there. They’ve got kind of a weird thing going on.

And Sharon, who is pregnant but may not yet know it, doesn’t do much of anything. She buys her husband a book for his birthday. She catches a screening of a Dean Martin movie she was in, just to see how the audience likes it. She listens to music. She dances. She seems like a nice person.

For a very long time, Tarantino is content to just drift along with his characters over a few days in February – and while we are always aware that every scene is two or three times longer than it needs to be, the actors make the time pass pleasantly. DiCaprio and Pitt aren’t just coasting; they’re playing people with histories and neuroses and affectations, and it’s fun to watch them work. Robbie gives Sharon Tate an essential sweetness that makes up for her lack of dialogue. She’s more of a figure than a character, gliding innocently through her happy life, beguiling the camera as well as the people around her. It works, even though there’s no real point to it.

Rick’s career gives Tarantino an excuse to stage extensive re-creations of era-appropriate movies, TV shows and promotional clips, even to the point of inserting DiCaprio into one very recognizable movie for a brief fantasy sequence. This stuff does almost nothing to further the story, and eventually Tarantino just abandons the device to shoot a cheap television show with the production values and pacing of a present-day feature, because he just can’t help himself.

All this is to say I just watched this movie and I have no idea what it’s about, other than the stuff Tarantino thinks is cool. (For what it’s worth, I didn’t catch a single N-word in this one, though what the movie does to its Asian characters isn’t exactly respectable.) And when it comes time to roll into the third act… well, I really don’t know what he thought he was doing.

I’ve been asked not to spoil the ending of Once Upon A Time … In Hollywood, but honestly, I don’t know that I can. Facts are facts, after all, though if you’ve seen Inglourious Basterds you know the historical record isn’t really the most important thing on his mind once he gets an idea.

What I will say is that when Tarantino finally reaches his climax, he blows it in an almost spectacular fashion – not just in terms of contempt for his characters, but for the story he’s supposedly telling. There’s a sharp shift in tone and aesthetic that will probably work for some people, but felt to me like a bizarre, almost ludicrous indulgence, like watching Mario Bava or Dario Argento take over a David Fincher movie in the final reel. Yes, Quentin, I got the reference. No, it isn’t earned.

Anyway, it’s the ninth film from Tarantino. I think I hate it. But at least he got off, and that’s the important thing.