NowMagazineMovies & TVReviewsReview: Pain And Glory is full of high drama and quiet realizations

Review: Pain And Glory is full of high drama and quiet realizations 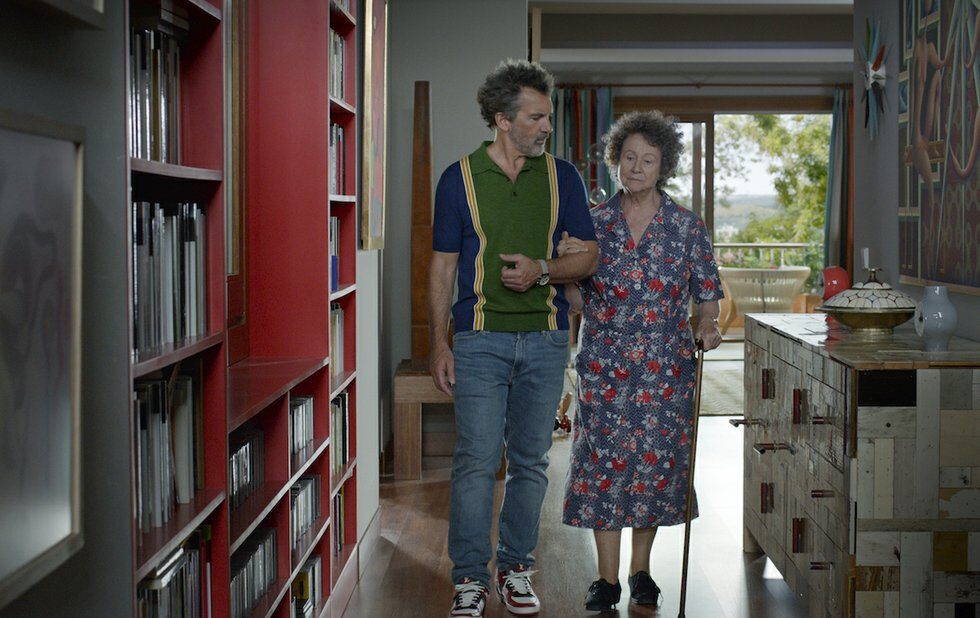 “Your eyes have changed, darling,” an actor says to aging filmmaker Salvador Mallo early on in Pain And Glory. “The film is the same.”

Pedro Almodóvar’s moving and often surprising 21st feature finds the Spanish cinema titan looking back to move forward with a semi-autobiographical story exploring the way desires, both sexual and creative, shift as we age.

Antonio Banderas, reuniting with Almodóvar for an eighth time, stars as Salvador, a wealthy but creatively stagnant director who’s invited to attend a screening of his classic film, Sabor (“Flavour”), which has been remastered and reappraised. Salvador originally hated the lead performance by actor Alberto Crespo (Asier Etxeandia) and stopped speaking to him. But he has done some reappraising and reaches out to his estranged friend for the first time in 30 years, setting off a chain of melodramatic events that force him to take stock of past life choices.

Both Salvador and Alberto seem trapped in the 90s. Alberto resembles a grunge holdout in flannel and hard rock t-shirts. On his wall hangs a kitschy and confrontational poster for their film together: a strawberry tongue licking glistening red lips. Salvador, meanwhile, lives in a colourful, impeccably decorated and mausoleum-like apartment (a replica of Almodóvar’s own). Naturally, they start smoking heroin together.

The drug eases Salvador’s myriad body pains, which Almodóvar runs through in a bright and briskly informative graphic sequence, and leaves him adrift in memories of growing up in a whitewashed cave in the poor Valencian village of Paterna with his father (Raúl Arévalo) and mother Jacinta (Penélope Cruz).

Pain And Glory isn’t powered by plot. The narrative zigzags through memories and a series of formative relationships that Salvador comes to see differently.

Alberto stages a solo show based on one of Salvador’s unproduced old scripts, precipitating a typically verbose Almodóvarian monologue that elucidates and parallels Salvador’s cinematic and romantic loves, which in turn leads to the film’s first amazingly dramatic coincidence: Salvador’s ex-lover Federico (Leonardo Sbaraglia) happens to be in the audience, and then tracks the director down to reminisce.

Meanwhile, we learn in flashbacks that Salvador was a whip-smart and artistically gifted child who helped a local labourer (César Vicente) learn to read and write. Obsessed with American movie stars, he would quiz his exhausted mother about the lifestyles of the rich and famous. When young Salvador finds out he is to be educated in a Catholic seminary – because it’s the only option the family can afford – he tries to run away. He’s resentful of being forced deeper into repressive Catholicism, and he goes on to sideline his mother during his creative peak as a filmmaker, at a time when she happened to need him most.

Toward the end of her life, Salvador’s mother (played in her older years by Julieta Serrano, one of the director’s 1980s regulars who returns to the Almodóvar fold for the first time since 1989’s Tie Me Up! Tie Me Down!) never forgave him for it.

Each successive relationship – Alberto, Federico, Jacinta – adds to a snowballing emotionality until we reach a sensuous climax that beautifully encapsulates the double-edged subtext and illustrates that how things happen is often more cinematically exhilarating than explanations of why they happen.

The film is also full of sly meta-moments that lay bare Almodóvar’s creative approach. In one scene, Salvador tells Alberto the key to melodramatic acting is restraint: good actors don’t cry, they fight to hold back tears. Banderas takes that instruction to heart in a subtle performance that is all about moments of quiet realization that play against Etxeandia, Sbaraglia and Serrano’s chatty and demonstrative characters.

Viewing the past through new perspectives is a big theme in politics, art and cinema, and this is Almodóvar’s most self-reflective film, though its political dimensions are more implied. Even if details are heightened and fictionalized, the trappings of Salvador’s life suggest a figure once considered artistically rebellious during a conservative era now grasping for relevance in liberal times. Salvador’s solution to this problem is to rekindle the urgent desires that sent him down his creative path in the first place.

It would seem Salvador, like Almodóvar, rose to prominence not that long after the end of Franco’s dictatorship with films that dealt frankly with taboo sexuality. Unable to tap that subversive spirit now that he’s rich and doted on by a housekeeper and assistant, Salvador looks around and there aren’t many meaningful relationships in his life.

And yet, this portrait of creeping existential irrelevance and regret is not exactly dead below the waist. Pain And Glory has all the vivid colour and considered composition, fluid camera moves, striking wardrobe and art direction for which Almodóvar is known. And though he seems to pointedly acknowledge his bougieness, the director hasn’t bought into the film industry’s move toward diverse casting: the only POC characters are the maid and a group of drug dealers.

Even if Pain And Glory errs on the side of restraint, Almodóvar still a master at blending exaggeration and earnestness into something that feels distinct and personal. But here that style is especially potent in the way it becomes a sharp reflection of the film’s underlying tension: the deeper we go into the source of Salvador’s past repression, the more intensely we feel the emotional highs.