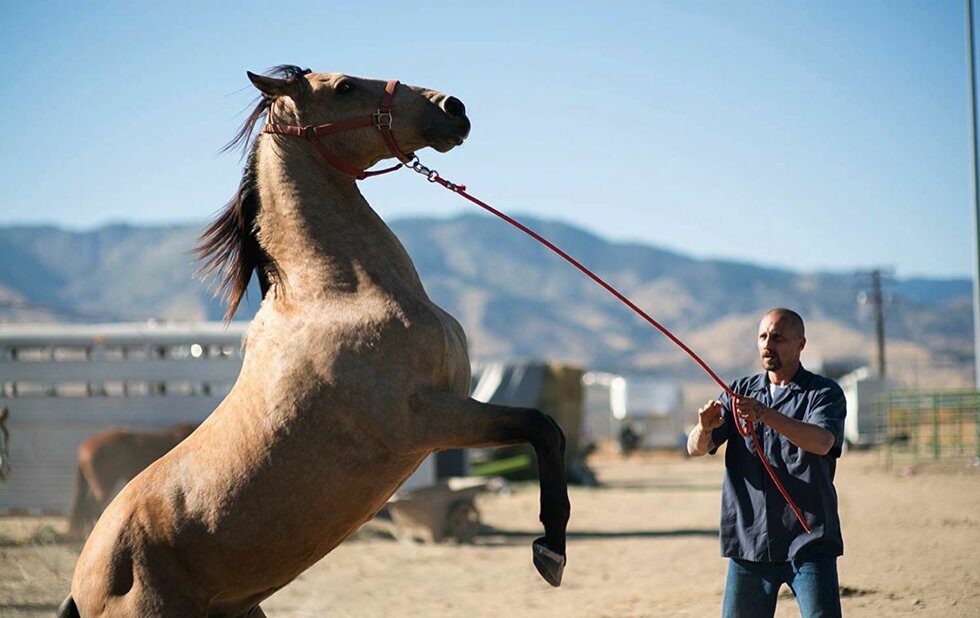 We don’t know very much about Roman Coleman (Matthias Schoenaerts), the protagonist of The Mustang. We know he’s a convict in a Nevada penitentiary, serving a long sentence, but we don’t know why. We know he doesn’t much like talking – to his fellow inmates, to the placement officer (Connie Britton) trying to help him, to the young woman (Gideon Adlon) who comes to see him. And we know he’s angry.

The placement officer puts Roman into a rehabilitation program where convicts work with wild mustangs, taming them for eventual auction. Initially, that means Roman spends his days shovelling manure. But the aging cowboy (Bruce Dern) who runs the program sees something in him, nudges him toward participating more actively. Maybe work with the horses, see what happens. And something does happen.

On its face, The Mustang is your basic American indie about second chances and unexpected connections, and – much like another of this week’s releases, An Audience Of Chairs – it’s working from a pretty familiar blueprint. But the film’s director, Laure de Clermont-Tonnerre, isn’t interested in a generic redemption story. She’s curious about the path Roman takes, and the work it entails, and what it might feel like for a man to find purpose after years of stasis and self-loathing. The result is a moving, even beguiling character study that also speaks volumes about America’s relationship to its incarcerated citizens.

De Clermont-Tonnerre started her career as an actor – she appears in small roles in Time Regained and The Diving Bell And The Butterfly – and The Mustang, adapted from her 2014 short Rabbit, is the work of someone who watches people very closely. Schoenaerts, the Belgian actor whose resumé includes A Bigger Splash, Far From The Madding Crowd and Disorder, among others, turns out to be an ideal collaborator for her he makes himself as alien and unknowable to the camera as that wild mustang is to Roman himself.

We’re forced to look closer at both of them, and it makes the film seem that much richer and more intimate, especially once de Clermont-Tonnerre starts to open up the story. A cheerful fellow convict (Mudbound’s Jason Mitchell) offers help, but Roman rebuffs him. Another inmate (Josh Stewart, the sinister John Pilgrim in the most recent season of The Punisher) is a lot less cheerful, and a lot more insistent about using Roman’s access to vet medicine for a drug scheme. We learn who Roman is by the way he responds to each new interaction. Eventually, we learn how he ended up in prison, and it lands like a hammer blow.

In that moment, and in one other, The Mustang wears its heart on its sleeve: it’s a film about the impossibility of rehabilitation without empathy or compassion, and how the American prison system has become a source of cheap labour rather than a means of sending people back into the world as functional members of society. De Clermont-Tonnerre and co-writers Mona Fastvold and Brock Norman Brock are making that statement, and making it eloquently, but they’re doing it through thoughtfully realized characters and powerful storytelling. You know, cinema.