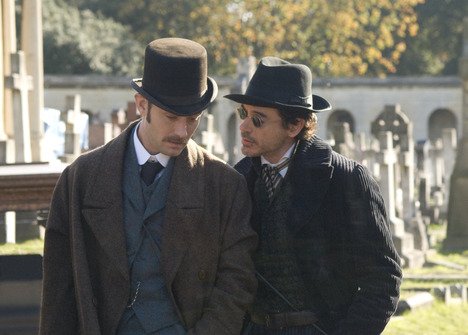 We’ve had six years of Hugh Laurie and Robert Sean Leonard channelling Arthur Conan Doyle’s deductive genius and his faithful if irritated companion – long enough for their dynamic to seep into the popular consciousness.

But a House is not a Holmes, so it was only a matter of time before someone got around to revisiting the original. When Guy Ritchie landed the gig, noses were upturned – isn’t he that fellow who makes those films where everyone swears and waves pistols about?

But then, this isn’t Conan Doyle’s Holmes. Rather than the arch, cerebral sleuth who could identify an evildoer with a sidelong glance, this Holmes is a sinewy, powerful fellow – fleet of foot, prone to leaping out of windows, that sort of thing. (To be fair, Conan Doyle did mention Holmes’s knowledge of the martial arts he clearly just forgot to mention the bit where Holmes blew off steam as an underground pit fighter.)

It works well enough, I guess. Holmes and Watson are chasing the shadowy Lord Blackwood (Mark Strong), recently executed and apparently returned from the dead, a story that riffs nicely on Holmes’s various past adventures. The production design and costumes are impeccable, and Hans Zimmer’s period-ish score keeps everything moving along at speed.

What doesn’t work is the casting of Downey. It’s not his fault. He’s fine with the action stuff, and he has fun with the character’s eccentricities. He’s just too extroverted an actor – too present a presence – to play someone who lives largely in his head.

But a film shouldn’t have to keep convincing its audience that its leading man really is right for his role. It does that in the first five minutes or never does it at all – and Sherlock Holmes never gets there.