Despite its zombie flick savvy and high gore factor, Zombieland isn’t worth visiting 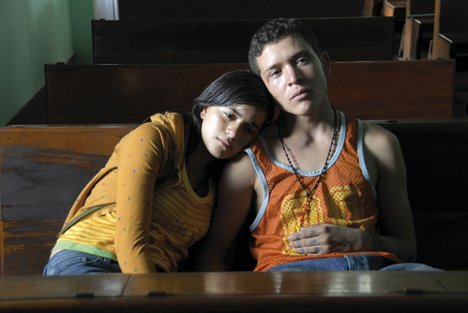 Set somewhere between affectionate parody and straight-up horror movie, Zombieland opens two months after the outbreak of a virus that’s turned most of humanity into raging, sprinting cannibals, with just a handful of survivors making their way through the wreckage of America.[rssbreak]

Our guide to this world is a paranoid college geek (Adventureland’s Jesse Eisenberg) who’s stayed unbitten by obsessively following a set of elaborate but fairly reasonable rules – stuff like “don’t be a hero” and “always check the back seat of your vehicle” – which appear onscreen as jaunty text, the better to set up the movie’s funhouse tone.

But as our nameless loner meets up with other survivors – an ass-kicking Southerner (Woody Harrelson) and a couple of resourceful sisters (Emma Stone and Abigail Breslin) making their way to a Los Angeles theme park – Zombieland gets confused as to what sort of movie it wants to be.

The obvious point of comparison here is Edgar Wright’s magnificent Shaun Of The Dead, which mixed character-centric humour and genre intensity with ease.

Zombieland just doesn’t measure up for all the characters’ yammering about rules, the film never even bothers to properly define its own universe. The zombies aren’t technically zombies, but rather plague victims with “swollen brains, rage issues and a serious case of the munchies” – so why wouldn’t a shotgun blast to the chest bring them down?

Zombieland isn’t a total writeoff. The viscera quotient is awfully high for a studio picture, the cast is clearly having fun, and a sequence set in the Hollywood Hills is absurd in just the right way.

But these are the little moments that would pop out on a late-night DVD viewing. On the big screen, they just hang there in isolation, waiting for a directorial flourish that will pull them together into an organic whole.

Instead, we get a zombie clown and a running gag about Twinkies.