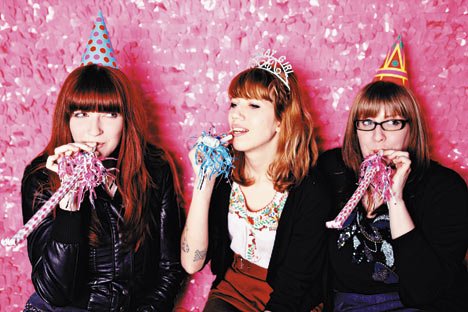 Vivian Girls may take their inspiration from 60s girl groups and 70s punk, but their success is a purely 21st-century story. In fact, it’s hard to think of any group more profoundly affected by the Internet’s rapid hype cycle.

In 2008, without significant promotion or distribution, the original 500-copy pressing of the band’s self-titled debut sold out in a mere 10 days. Something about the trio’s noisy, reverb-heavy garage-punk struck such a chord that within weeks they were the subject of music blogs all over the world.

“It’s something that none of us were ever expecting,” says lead singer/guitarist Cassie Ramone (born Cassie Grzymkowski). “We were all proud of our band from the beginning, but we never really thought it would get anywhere outside our local community.”

Soon, the same people who thrust the Brooklyn group into the spotlight were claiming they didn’t belong there. In 2008, a short video surfaced in which the members jokingly disparage “normal people” for their tendency to go for drinks with their co-workers. Now known as the infamous “bathtub interview,” the clip was tagged as evidence of everything from arrogance to elitism.

“We’ve learned that you always have to put forward the best version of yourself, which is something that we obviously weren’t doing that day,” she admits. “We were just goofing around and not taking it very seriously. I could see that it could come off as offensive to someone who doesn’t know our sense of humour or who’s taking it out of context.”

Vivian Girls’ debut album and its 2009 follow-up, Everything Goes Wrong (In the Red), display a combination of musical economy and lyrical simplicity that begs not to be taken too seriously, but the criticism has come hard and fast.

“I think it got to me particularly,” says Grzymkowski. “We make music because we really love doing it and so that maybe someone will relate to it in a positive way. To get so much backlash for something that we do so wholeheartedly can be really hurtful.”

Still, the Girls have learned to take it all in stride.

“At the end of the day, I’m thankful for everything that’s happened to us, good and bad. I’m really happy to be where I am. We all are.”