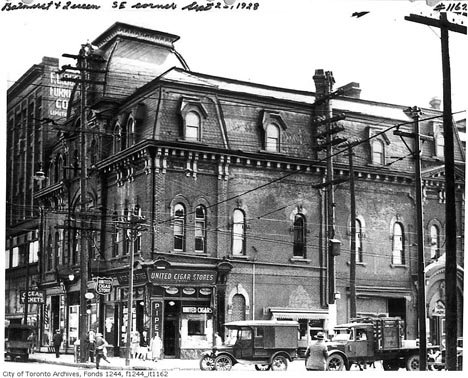 The Big Bop used to have a mansard roof. Toronto Archives

The Big Bop is closing, and we actually do care.

You can tell it’s winter when Toronto clubs start going under. First, word started spreading that the legendary Cameron House was up for sale, and then rumours started flying about Circa’s impending demise. Now the latest venue to jump into the dead pool is the Big Bop, which will be closing its doors sometime in early 2010.

We were sad about the Cameron House mainly because of the important historical role it served back when Queen West was still cool, but we could accept that its era had more or less passed. Circa’s potential closing was more just a reminder of the unfulfilled potential that the ambitious venture once aimed for, but we’d long ago given up hope on it being the hip mega-club it aspired to be.

In the case of the Big Bop though, we’re actually concerned about the hole it will leave in Toronto’s live music scene. Sure, most hip urbanites tend to see it as a sketchy hole-in-the-wall that caters mainly to teenaged suburban punks and ravers, and many regard its distinctive purple exterior as little more than an eyesore.

Several years ago I lived in the warehouse directly behind the Big Bop, and would often look out my living room window at underage metal fans chugging booze in the back alley, or gravers (goth ravers) smoking on the fire escape at 5 in the morning as psy-trance blasted in the background. The crowds and the noise weren’t always welcome neighbours, but for the most part it made me feel nostalgic for my teenage years and grateful that today’s kids still had some venues willing to cater to them.

While it’s not often talked about, the health of a city’s music scene depends greatly on having enough all-ages shows. I vividly remember how limited my options were as a teenager, and I’ll always have a soft spot in my heart for the spaces that let us put on shows when we weren’t old enough to drink (anyone else remember Classic Studios on Ossington?). Not only do these skuzzy bars give a place for kids to learn how to rock out on stage, they also provide an incubator for the next generation of promoters and bookers to learn their craft. You might be surprised at how many of Toronto’s behind the scenes movers and shakers got their start throwing all-ages punk gigs. Or for that matter, how many DJs and party promoters honed their skills at unlicensed raves in shady warehouses. We all got our start somewhere, and better to get a head start at 16 then to try and figure everything after you hit 19.

Back in the early 90s, I thought I had it rough as underage music fan, but these days things are much worse for those who don’t have a good fake ID. Sure, open-ended event spaces like Rolly’s Garage have tried to help the situation, but they’ve already been shut down, thanks to unfriendly neighbours (and some naivety on the part of the founders). The rave scene has been chased out of the warehouses for the most part, which means you’ll usually need to be over 19 if you want to dance to DJs all night anymore. Some of the bigger clubs occasionally host all-ages shows, but generally just for big touring acts with a young fan base – not the kind of thing that really helps out the local scene.

So if the Big Bop turns into a furniture store catering to the condo crowd, where is the next generation of musicians, DJs and promoters going to cut their teeth? The problem is, clubs make most of their money off of booze, and many complain that the city is making it harder and harder to even do that. On the other hand, there’s definitely a market here that’s just waiting to be properly tapped. The question is whether there’s anyone in town creative (or crazy) enough to fill the big hole that the Big Bop will leave behind.[rssbreak]