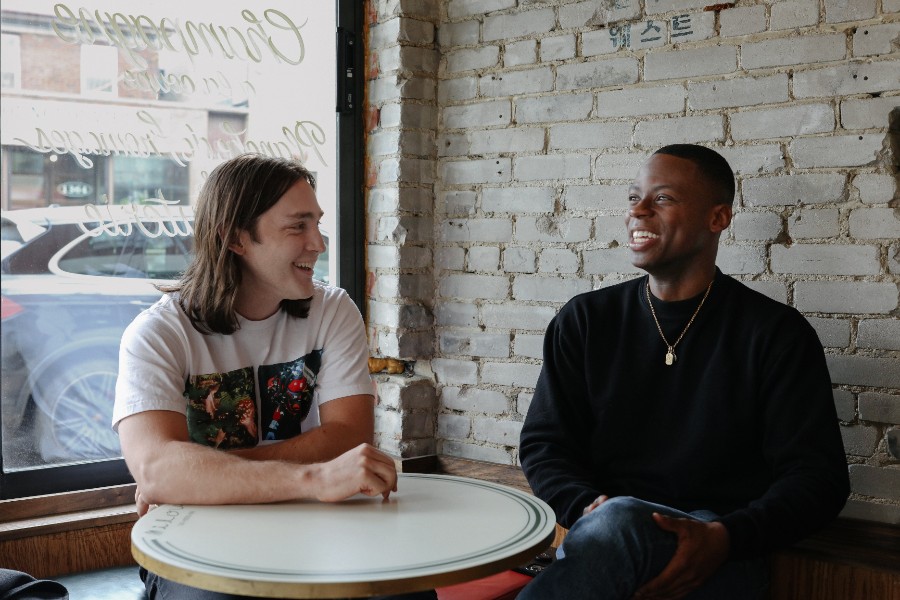 Boosie Fade never got to throw its final party. Toronto’s favourite hip-hop party was counting down to that blowout final event in May of 2020, and then the world had other plans.

Now that we can safely convene again, Boosie Fade (on IG at @BoosieFadeTO) is coming back this coming Friday (December 10) at AMPM – and not just for one last night. It’s back indefinitely.

“Our plan was to hand off the online communities to other people, have our final Boosie Fade, and then just ride off into the sunset,” says Jordan Sowunmi, one half of the DJ duo behind Boosie Fade. “But we just wanted to bring people together again.

“The parties are amazing, obviously, but what makes Boosie Fade so special is the community, the people that we’ve brought together through common interests of music and film and all these other things. After being locked down for so long, with everyone so siloed at home, we wanted to be responsible for bringing that back.”

“Eight years, that’s like an institution,” Rathbone says. “Honestly, [what made it survive this long] isn’t just us, it’s the strength of the community, the people in it.”

Sowunmi, now the music editorial lead at TikTok (and a former NOW music contributor) and Rathbone, who also works in film production, started Boosie Fade with a party at the Red Light on Dundas West (RIP) in 2014. The party quickly outgrew the space, and after some jumping around they settled at the Shop in the basement of Parts & Labour. The upcoming party is upstairs where Parts & Labour used to be, at AMPM.

In 2016, they started a Boosie Fade group on Facebook as an outgrowth of the event, but it took on a life of its own. There are lively discussions of new hip-hop and hip-hop-adjacent music, new song roundups and weekly “promote yourself” threads where members can share the things they’re up to with the group. When there’s a major story in hip-hop, like Drake’s beef with Pusha T, the group explodes with jokes and memes. With more than 3,500 members, the group even goes beyond Toronto with people all over the world participating, and now there are spinoff Boosie Fade groups for books, movies, sports and more.

Online, like at the parties, there’s a spirit of inclusivity and positivity – or as Sowunmi puts it, “a purity.” The idea is for people to post or talk about or listen to stuff they like. “If it’s something you hate, you just don’t post about it,” he says. “There are so many places on the internet to talk about stuff you hate, especially in hip-hop.”

It’s like the hip-hop version of poptimism – “hip-hop-tivism,” Rathbone quips – and even if you’ve never been to a Boosie Fade, you can feel that energy right away. There are people shouting lyrics together, meeting new friends and dancing with no Toronto-style self-consciousness. People have reached out and said they want to come out to the party but they’re worried they don’t know anybody, and Rathbone and Sowunmi have told them to come and they’d introduce them to people. Some of those friendships have lasted well beyond Boosie Fade.

“I would say we’re anti-clout,” Sowunmi says. “When we started, we had been going to these club nights when the spirit was really exclusivity, like bottle service and dress codes and that kind of thing. When that happens, it’s not really about the music because music is inherently democratic.”

“What inspired Boosie Fade in the first place was that Jordan and I loved playing the music that we listen to in private out in public,” Rathbone jumps in. “If the music comes first, then the people will naturally come next. If it’s about social status, then it doesn’t work the same way.”

There’s a certain kind of song that works at Boosie Fade. It’s not about whatever song is coolest or most critically acclaimed or even the most popular, but it has to have an energy to melt away your defenses and make you get hyped.

“It’s a certain hardness or heaviness,” says Rathbone. “Something that will draw an exciting reaction from the crowd.”

It’s hard to explain, but they know what works. There’s a whole repertoire of songs they’d consider Boosie Fade classics, songs they could drop in at any time when the energy starts to drop and know the crowd will go off. They won’t necessarily work everywhere, but they’ll work at Boosie Fade.

Off the top of their head, they name me a few: Bitch Better Have My Money by Rihanna, Pop That by French Montana, Only by Nicki Minaj and King’s Dead by Kendrick Lamar with Jay Rock and Future.

After two years off, the two DJs have been collecting songs they can’t wait to play out and see how their friends will react. For Rathbone, it’s Repaid by Lil Baby and 42 Dugg, but there’s a whole playlist you can listen to in advance featuring songs by Saweetie, Tyler, The Creator, Pressa, Playboi Carti and more.

It’s a unique lightning in a bottle that they’ve both always known is special, so when they were briefly both living away from Toronto – Sowunmi in Amsterdam and Rathbone in L.A. – they were still flying back every two and a half months to DJ. It started to turn into a bit of an empire, with brand partnerships, talks, film screenings and more. They started to wonder if they could turn it into their day job.

“But that stripped some of the love away from it,” says Sowunmi.

The time away helped them rediscover the love of it, which is why they’re not planning the end of Boosie Fade but rather its rebirth. It won’t be as regular as before, with events running when they feel right. But there’s already a few planned – this first party, another one in January (details TBA) and the return of their Boosie Fade Film Club at TIFF Bell Lightbox on February 3, a screening of Romeo Must Die (featuring the late DMX and the late Aaliyah).

“The response to us just saying we’re coming back has been unreal,” says Rathbone.

“The way people are excited for it just makes me want to do it more,” Sowunmi agrees. “If we can create something that means this much to people and we’re both here and in the mood to do it, we really want to do it. It feels like we have to.”